The streets were dark with something more than night.1

These feelings of apprehension, as encapsulated in the preceding quotes, have often been evoked when I’ve encountered Steve Laurie’s images, as they appear online. Laurie frequently shares his work to social media, so that the images become a series, almost a story he’s telling us visually, in ongoing installments. For this essay – and reflecting my own interest, in conversations with the artist – the night scenes are the ones that I focus upon, as they are the ones that enthrall me. And, perhaps, I am providing a story to these images, and relying strongly on fine fiction writers to provide a worthy narrative.

The world that Laurie documents in his captured scenes is uninhabited: it’s unclear if the people have fled, or just know that they’re unwelcome. His urban landscape seems haunted. Empty of people (In the night. In the dark.3) they are those ‘public’ spaces that belong to no one, and everyone, simultaneously. These are often places that are liminal, occupying a position at, or on both sides of, a boundary or threshold: spaces that are not so much unwanted, but that no one wants to be within. 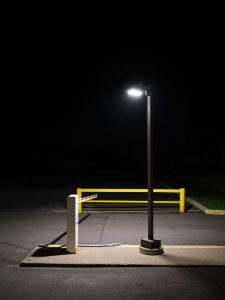 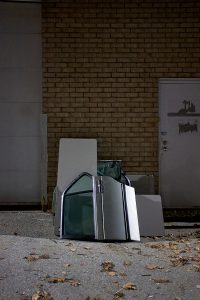 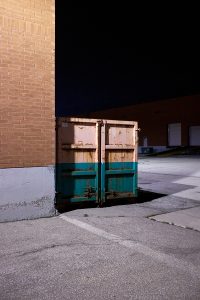 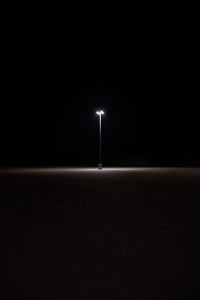 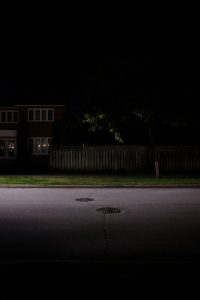 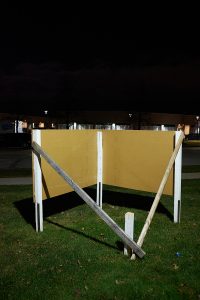 I also walk around the city late at night, alone, as Laurie does. In the age of COVID, many of us did this, and still do. Many of us did so before the pandemic.

The city becomes something else at that time: when I find myself walking primarily in the later evening or early morning (in St. Catharines or Welland, both outposts in the rust belt wonderland of Niagara, so there’s abandonment and wastelands already) it’s almost always deserted.

‘The kind of nightmare a city has, in the early hours of the morning.’
‘OK …’ said Polly. ‘That is not an answer I was expecting. Cities dream? I didn’t even know they slept.’
‘You must have noticed the difference in how a city feels during the day and at night,’ said Murray.4

The avenues and spaces feel forsaken and haunted, simultaneously (…I’m unsure if I’m speaking of Laurie’s captured moments or my own experiences walking, as they’ve begun to bleed together. No place is everyplace, nowhere is now here). I must steal a line from another fine ‘street photographer’ (Merle Addison) to capture this sentiment: and late at night you could hear the weeping. 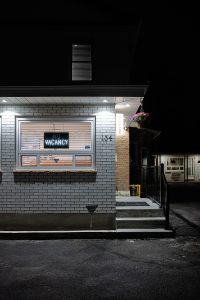 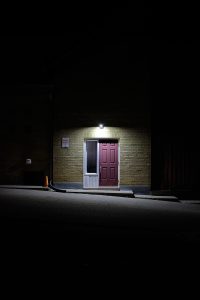 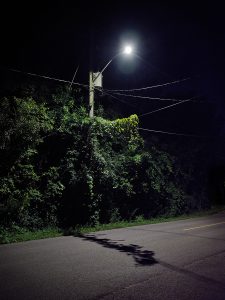 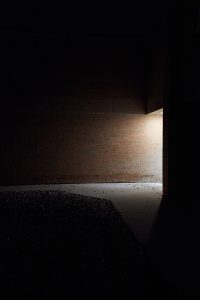 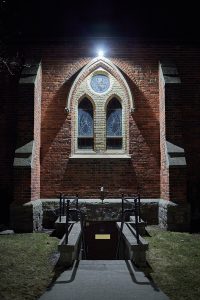 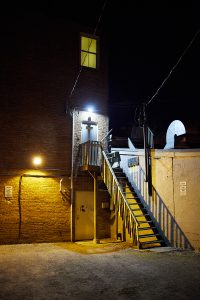 One interpretation of hauntings is that something bad happened in a place, and the residual emotion or trauma is just waiting for someone to trigger it….or perhaps that’s a typical human response of attempting to force a ‘deeper’ meaning, ignoring what is in front of us, when the truth is that none of it means anything, and is just….empty or desolate. Like in Alan Moore’s WATCHMEN, where the true Rorschach test is that it is nothing, always nothing, we just pretend there is something, as an unwitting service to our own egos – when we’re just fleeting and flitting, and the empty spaces will remain, and now we might haunt them, too….

Neil Gaiman, in one of his tales about the world of dreams, offered a story where people are caught within the dream of a city. This may seem incongruous, but when you’re out walking at night, and alone, doesn’t the city become an entity of itself, like someone / something you’re engaging with? An ephemeral experience that is so quiet, so personal and the moments make perfect sense to you but are incommunicable to others who were not there – just like a dream, with its implicit incommunicability to others?

The aforementioned Gaiman story A Tale of Two Cities “concerns a city dweller who finds himself one day in what he believes to be the dream of the city in which he lives, wherein an old man explains his fear that the cities will someday awaken. It ends with the frightened city dweller returning to “reality”, whereupon he moves away from the city to a small village, where the storyteller meets him. He fears that one day, the cities will awaken. This story is influenced by the work of horror writer H.P. Lovecraft, especially in its image of a character nearly driven to madness after discovering a truth that humans were never meant to know.” ”(from here)

Laurie’s images have an implicit drama (not the excess too often fostered in Lovecraft’s stories, to step back to Gaiman and to step back – again – in admitting I do enjoy Lovecraft’s ouvre): the stark artificial light breaking the dark, objects and architecture that we might walk right past during the day that now seem to have a weight. Many of the scenes also seem to be the spaces behind buildings, or other places that might not seem immediately ‘worthy’ of an image, for one to pause to ‘capture.’ Though the scenes are striking in terms of lighting and tone, there’s also a softness in them, hues and colours that are less intense.

Detritus, remnants, that which was but now is not. 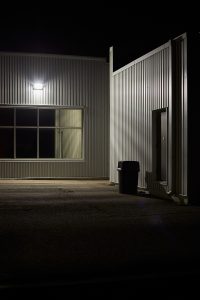 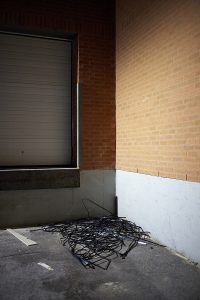 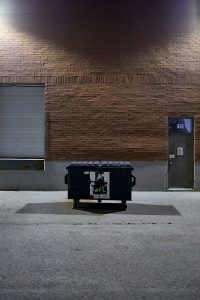 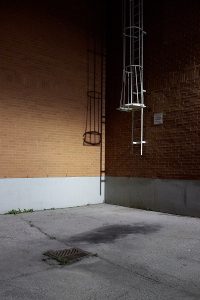 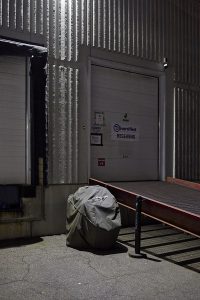 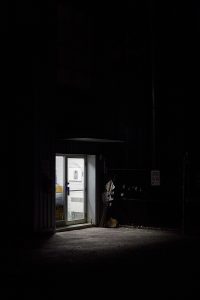 Laurie has an interesting relationship in his work, not just to public spaces, but also in terms of evoking emotional responses. I was lucky enough to experience his drawing machine, a mad smokey gassy thing that he used to make drawings in parking lots, with dark insidious industrial lines.

That was an artwork, or performance, or installation, with the remnants scorched on the asphalt ground, that engaged in a public sphere – whether physical or emotive – and that unsettled while making you either see things differently, or anew.

I’ve thrown a lot of literature references in here: this is appropriate, as Laurie’s images invite us to invent – or be part – of a story. In Gaiman’s Sandman there is a sequence, as that story arc comes to a close, where the title character meets with William Shakespeare, after the latter has written the second of the two plays promised in exchange for the ‘king of stories’ having ‘opened a door’ within the playwright, the key to his greatness. In their conversation – one more tinged with regret on either side than pride – Shakespeare admits that the stories seemed more real to him than his own life, even speaking of how his own son’s death was welcome fodder for his true life.

Laurie’s images of the city at night seem like it’s true face, to me: these are more real than other brighter images, just as my experience of my cities at night is more definitive to me than what happens during the tumultuous, noisy ‘regular’ hours. The quite darkness, the silence, encourages you to listen and consider, and be present in the moment.

But there is another face to Laurie’s scenes of night (I will admit to being someone – dare I say it – dark in my interpretations, not just of his work but in general. A good friend I’d known for years always assumed I was of Russian heritage, as my somewhat nihilist sarcasm was an irrefutable argument to him of this).

Of late, I’ve been enjoying Bob Bickford’s book Love, Ghost : letters from Sunset & Vine. I’ve responded to Bickford’s fine writing before, and though his narratives have a weight of emotion to them, they are often – at heart – positive, like that period of mourning where you can remember what is now absent without a sharp pain.  Bickford – or Ghost, perhaps – would suggest that Nighttime is when the gentle things come out. The dark is where they’re safe.5

In Bickford’s writing, we are the ghosts, it seems: but this isn’t a bad thing. We are the ones who haunt these places and spaces – as I do, as perhaps Steve Laurie does – but they’re serene and perhaps comforting, even with absence genuine or implied. That is just a fact of life, not something to be lamented.

I try to remember a time when I didn’t feel you, Ghost, just out of sight. I can’t.6

Steven Laurie is originally from the Oshawa and Whitby (Ontario) area. He graduated from the Ontario College of Art and Design with honors in the disciplines of sculpture/installation, receiving the Seiji Award for Public Installation/Social Sculpture and the George A. Reid Award for Proficiency in Sculpture and Installation. Steven completed his Masters of Fine Arts degree at the University of Western Ontario and is a recipient of Canada Council for the Arts and Ontario Arts Council Project Assistance Grants. Recent solo and group exhibitions profiling his work include; Jacked!, Machinations: Kinetic Sculpture in the Age of Open Source, Death Can Dance, Clutch, and Speed Demon. He currently lives and has a studio in Toronto, Ontario, Canada.