What was the most awful thing about living as an adult on the same streets where you grew up? It’s so easy to remember how perfect it was supposed to be. Reminders were always smacking you in the face. Good things happened—sure, I knew that. They just happened in other places. (Craig Davidson, Cataract City)

There’s a banal vulgarity to the rust belt wonderland that spans much of Niagara. A meanness, if you will, that is not so much a simple narrative as one that’s a stain spreading out in multiple directions. The ruins and building of what was, and the sparseness of what still ‘is’, define this place. When walking the streets of this city (I walk everywhere, usually), I find myself often on Geneva Street or St. Paul in the downtown, two of the main spaces of the ‘Garden City’ of St. Catharines. The images I’m talking about here and responding to (already with a certain acidity) are of the same areas, by Sandy Fairbairn. A graduate of OCA (long before it was OCAD), Fairbairn is from Welland – another outpost of the rust belt wonderland that is this region – and his eye has often been turned onto the architectural detritus that defines Niagara.

Earlier in 2020, I curated an exhibition of his images of Welland (Welland: Times Present Times Past) at AIH Studios in downtown Welland; some of the photographs date back to the early 1970s, whereas others were as recent as 2019. At the reception, people exchanged stories and memories of the various sites and buildings, and a similar, very personal immediacy is manifest for me, in engaging with these photographic fragments of St. Catharines. 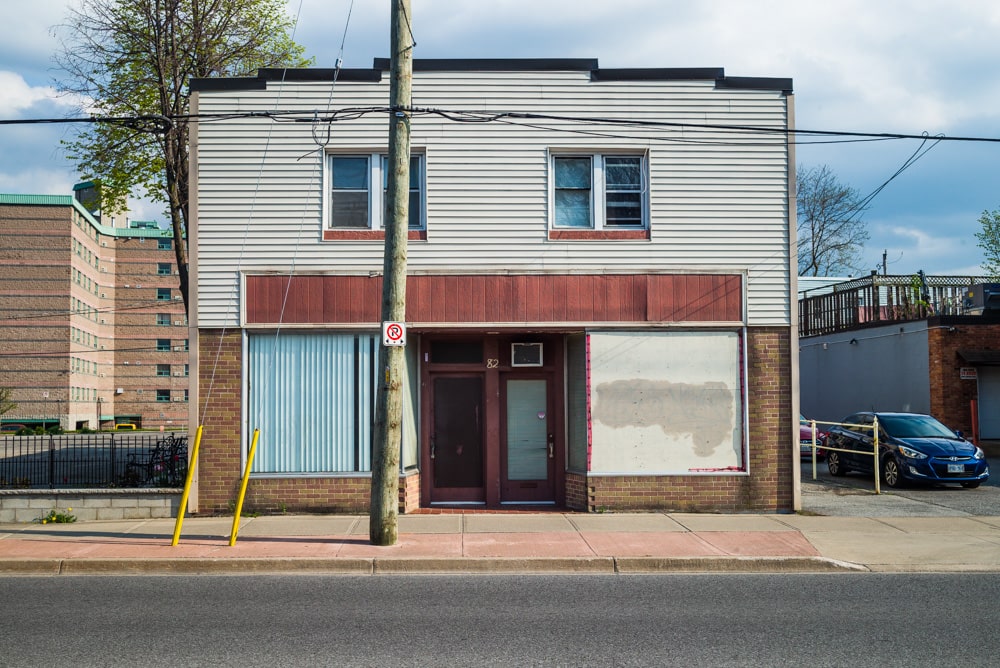 In many ways, I offer a unique perspective on Fairbairn’s ‘documentary’ works. I grew up here, and walked those same streets on my way to work, just off the downtown, or as a meandering teenager seeking something ‘more’ than what was ‘here.’ When I left at nineteen, I was driven by the same sentiment as that shared with me by Elizabeth Chitty (an artist, educator and activist also ‘from here’). Both of us could not leave quickly enough, and yet both of us – like others, I imagine – find ourselves back here. When I returned to Niagara over five years ago, I ‘chose’ to interpret it as a new city, as it had, in some ways, changed greatly: but in other ways, it was as though nearly three decades hadn’t passed.

In Peter Straub’s fine horror novel KOKO, one character asked another “Do you really think there is a real point where then stops and now begins? Don’t you know that down deep the things that happen to you never really stop happening to you?” Less pleasantly introspective, I’d also offer the reminiscences of the artist in Margaret Atwood’s Cat’s Eye, when revisiting a city she abandoned (or felt abandoned by) emotionally long before her literal departure: “I am the wrong person to ask. This city is filled with bad memories. I can no longer see it for what it is….The fact is that I hate this city. I’ve hated it so long I can hardly remember feeling any other way about it.” Whether or not I hate this city depends upon the day, and vagaries of the political and developer class. But that contempt is present, turbid, below the surface. 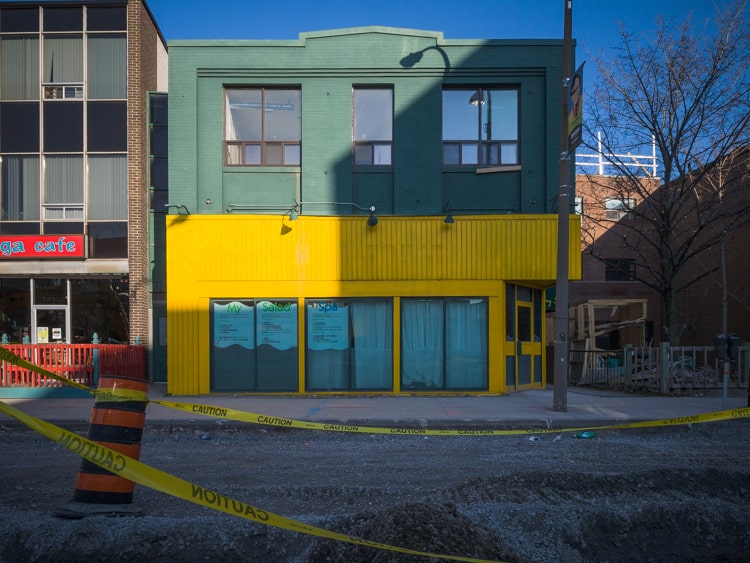 But this dourness isn’t reflected formally in Fairbairn’s images (which are but a fraction of his ongoing work, shooting buildings and sites in Niagara, from Welland to St. Catharines to Pelham to Fonthill). Often captured ‘straight on’, with Fairbairn across the street from the ‘subject’, the buildings – whether in use, or in a ‘new’ iteration of being, or abandoned and boarded up – are thoughtful portraits. His eye is unflinching: no fluffy, extraneous ‘contextualization’ here. The dead on framing is almost like a mug shot or the minimalist air of the coroner’s image taken of the dead, to help record, remember and identify ‘reality.’ But in this immediacy is also a sensitivity. I’ve described Fairbairn as a social historian with his lens, but I don’t think he’s comfortable with that term (this doubt makes me think that he deserves that accolade even more). There are thoughtful elements evoking the paintings of John Kasyn here, or even Lawren Harris’ St John’s Ward scenes. 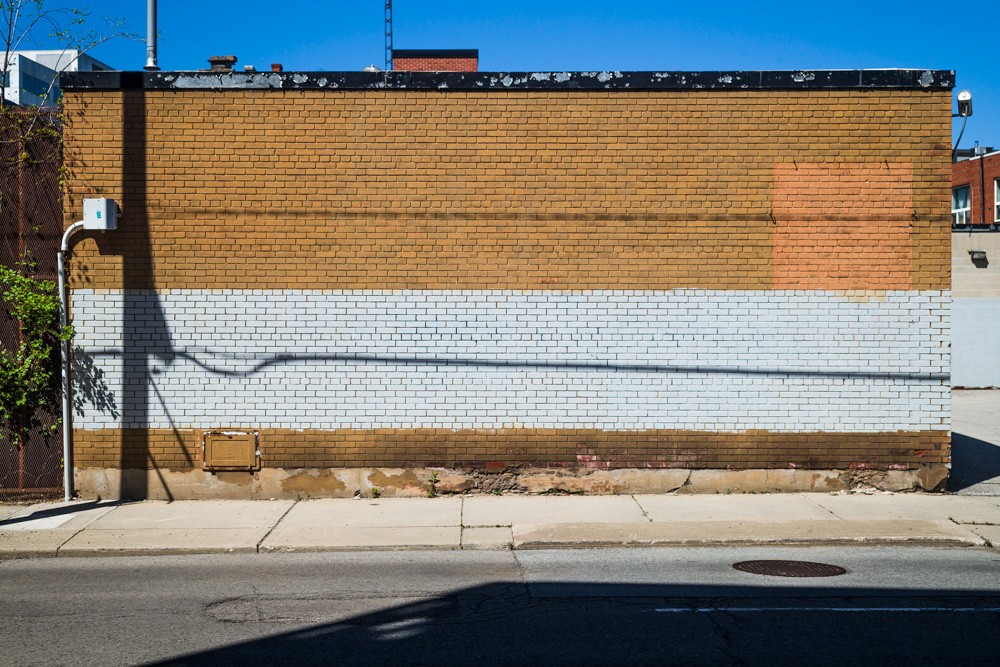 The rich blue skies, the vibrant colours (whether in an image of a ‘nameless’ building facade, all bright yellow, or the richly textured, weathered face of another, forgotten site) and the attention to detail of Fairbairn’s images hold the viewer. This is true whether or not you personally ‘know’ the subjects, or not. But seeing a ‘mom and pop’ corner store that I pass often, that another friend speaks about as a space that often allowed purchases even when she was a bit short of funds, or restaurants at the corner of Geneva and Welland Avenue that I trudged past many a day on my way to work, as a teen, or now, doing the same, give these moments a deeper resonance. There’s a literal density of the tightly packed buildings that speaks to a density of history. Sometimes this is very specific. The old St. Catharines Standard (still the ‘main’ newspaper here) building has sat just off St. Paul, off the downtown, empty and evoking a rusty dereliction in degraded tones of its edifice. But many of the other sites that Fairbairn documents lack even worn signage, often having boarded up or ‘tarped’ windows, stripped not just of any illusion of prosperity but also of any hints of identity. The neglected spaces are legion, and nameless, and too many to even remember. When speaking to a friend who also grew up here and has left, only returning for brief, rare visits, she expressed an idea that (again) is echoed in Atwood’s previously cited book: “Most of the time though I exult, and think I have had a narrow escape.” 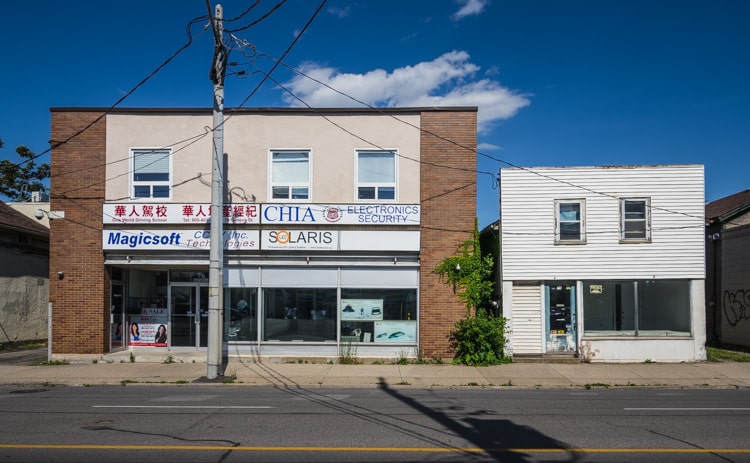 A side note: as I was working on this piece – which, as I indicated earlier is not my first exposure to Fairbairn’s images – Brock University sold historic Rodman Hall Art Centre to a developer for ‘residential use’, betraying both the cultural and the larger community of St. Catharines. The city that imagines itself the ‘jewel’ of Niagara will now no longer have a public art gallery (and the heritage designation of the historic site may or may not be lost, to be blunt). This greedy disdain for history and community reveals how this smug arrogance of St. Catharines is just hypocrisy. In the rust belt wonderland of Niagara (and in truth, I am not so much ‘Niagara based’ as dividing my time between St. Catharines and Welland), the facades are often false. Welland is considered a ‘slum’ of Niagara, and this is as untrue as St. Catharines being the de facto ‘capital’ of the area. Welland is, perhaps (quoting an artist and activist in that city, James Takeo) a blank slate with possibilities, whereas St. Catharines is more so a pretense, where the mayor has, during his tenure, forgotten he serves the citizens and not developers. 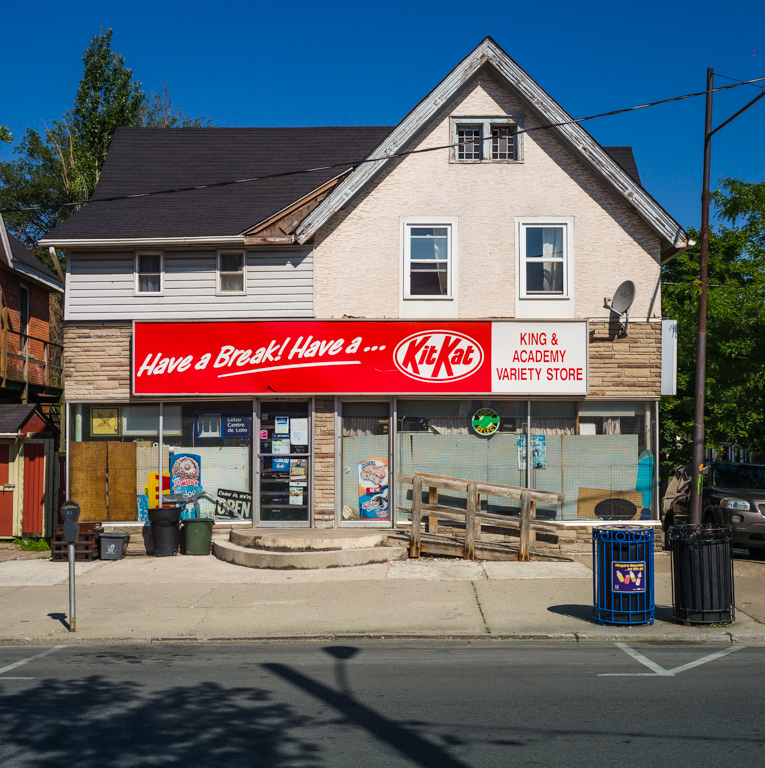 Fairbairn doesn’t title his images, other than date and location. As he often shoots the same sites over a period of time, this sparseness of title is often more evocative, and in some instances matches the bareness of the scenes. This offers a number of potential interactions: these aren’t named as they’ve shifted, so often, in use, or because they’re closed, and thus have ‘no use’, in the city, where – as we have seen with Rodman Hall and Brock University – ‘development’ is a mantra, that perhaps uses repetition by politicians to disguise its emptiness. But it also is a bit off putting, the lack of names: “I came to sense a sinisterness about the city, too. It wasn’t anything you could pinpoint—how could a city be evil? A city was just concrete and steel and glass, feeling no pain, retaining no memories. But then houses are made of the same stuff, and people go around claiming they’re haunted all the time.” That’s another barbed utterance from Craig Davidson, from Cataract City. It’s an appropriate book to mention here – not solely for its nomination for the Scotiabank Prize in 2013, or that the author also grew up in St. Catharines – but because the title refers to Niagara Falls, and a brief descriptor of the book offers that “some places you just can’t leave. The specific gravity’s too strong, keeps you locked in orbit. You’ve got to be launched out, like a circus performer from a cannon.” If that seems a bit dark, as a space to stand in which considering Fairbairn’s images, it will only be ‘worse’ if I admit to recently watching Disappearance at Clifton Hill. This is a film about a young woman who returns home to Niagara Falls, Ontario, when she inherits from her recently deceased mother a run-down, nearly decrepit motel that her family operated, and that is an anchoring legacy (like a millstone around the neck, perhaps) in the city’s Clifton Hill tourist district. This character, Abby, “becomes obsessed with reconstructing inchoate childhood memories”…. 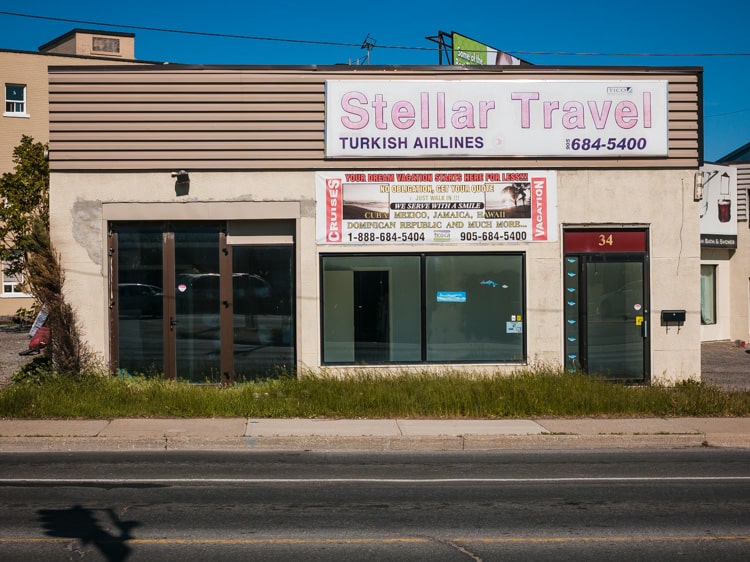 There is a fracture in Fairbairn’s images, between the present and the past, what I walk by – or just walked by yesterday, and will again tomorrow – and the ideas encapsulated by these buildings, in that manner that architecture holds ideas as much as people. When I lived on the Prairies, it was often referred to as ‘next year country’, which is an idea that things will get better. Many of these shots by Fairbairn imply the opposite: this is last year’s country, back when (to paraphrase another artist’s work about the history of St. Catharines, as manifest in General Motors defining then abandoning the region) ‘you could get a good job right out of high school.’ Injecting an idea from Berenice Abbott, Fairbairn’s “photography can only represent the present. Once photographed, the subject becomes part of the past.”  His quiet tableaux are equally requiem and realism, worn and weathered like forgotten grave markers, that I – and so many others – will walk past, as we have in the past few decades, perhaps unaware, perhaps unsettled, even into the ‘new’ year….. 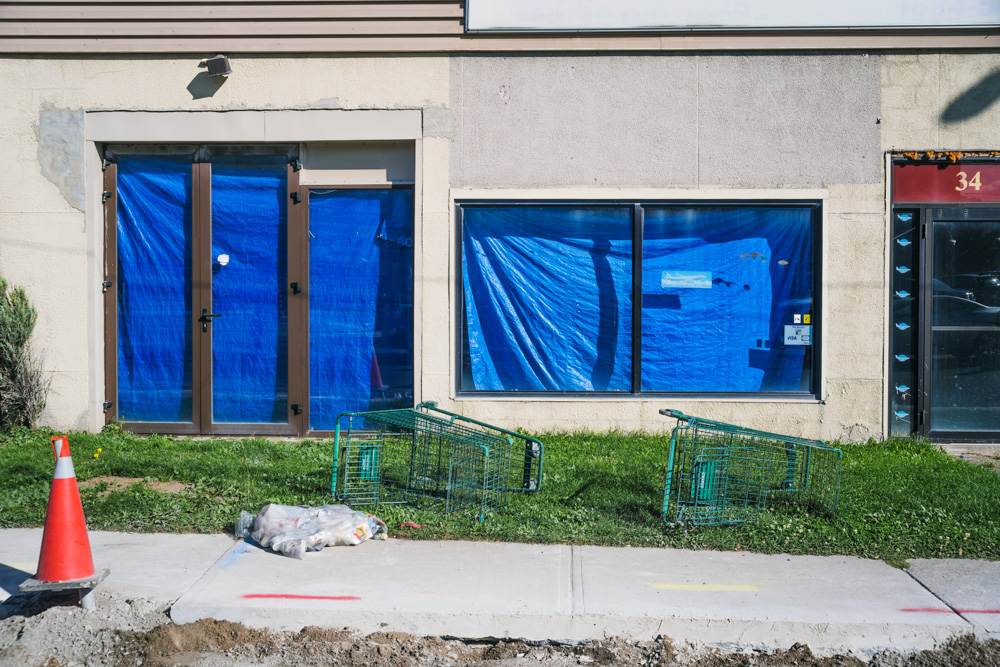 More of Sandy Fairbairn’s photographic practice can be seen here, in a review by James Takeo, and a feature about him, as NAC (Niagara Artists Centre) Member of the Moment can be read here. All images are copyright of the artist, and generously provided by him.

Bart Gazzola is an arts writer, curator and photographer based in Niagara. He’s published with New Art Examiner, Canadian Art, BlackFlash Magazine (where he was editorial chair for three years), Magenta Magazine and Galleries West, and was the art critic at Planet S in Saskatoon for nearly decade. His most recent curatorial project was Welland: Times Present Times Past (2020) at AIH Studios in Welland. He’s currently assistant editor at The Sound: Niagara’s Arts and Culture Magazine, where his ongoing series on Brock University and Rodman Hall Art Centre earned him a St. Catharines Arts Award nomination (2020).