A Taste of Silence: Joel Smith 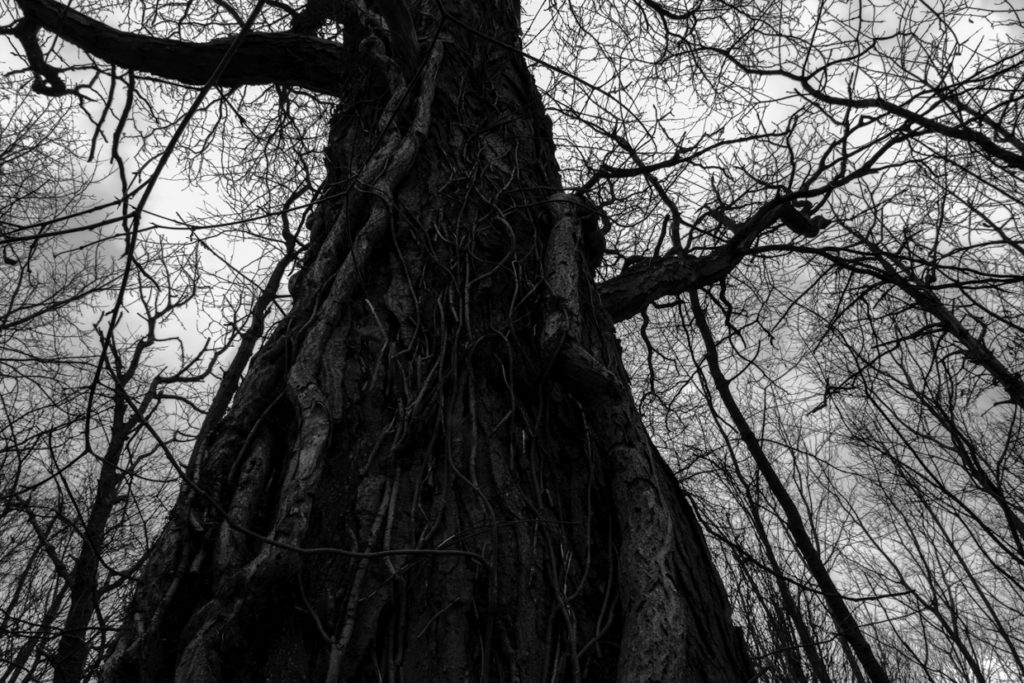 Several ideas come to mind, when encountering Joel Smith‘s landscapes that were installed in an exhibition in Cayuga, just outside of Niagara, this past winter. Firstly – and this is an idea that Joel and I have spoken about, often – is the funerary, solemn nature of the images, that suggest something of a requiem (more on how that connects to the scenes and sentiments that inform the work, in a moment). The other is that, as we’re all enduring the COVID situation, and self isolate and are engaging less in public space, I remember reading a story that the canals in Venice are now clear again. This also brought to mind how, in Avengers Endgame, Steve Rogers tells Natasha Romanoff that he saw more marine life in the Hudson than ever before, hinting at that internet meme in a less sarcastic manner than usual, that ‘Thanos was right.”

Less flippantly, there’s a science fiction novel (the name and author allude me) where, in a contemporary setting, aliens appear and take stewardship, on their terms, of the Earth. Much to humanity’s chagrin (and several political leaders whom are easily recognized as having been pilfered from ‘reality’, ahem), the aliens indicate that the well being of the Earth does not necessarily include the continuation of humanity…. 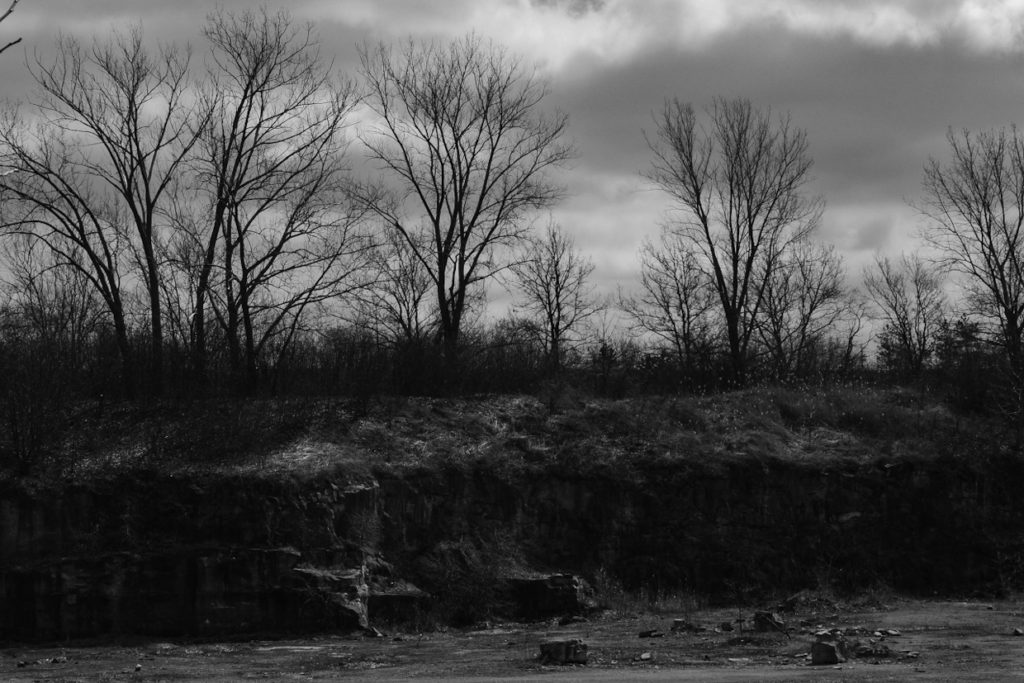 This series of larger photographs by Smith encompasses “several large scale black and white images, exploring the loss of The Carolinian Forest area of Southern Ontario. As development encroaches on the last scraps of a once-great woods, this is my way to preserve and bring to light this amazing and unique area before it vanishes. 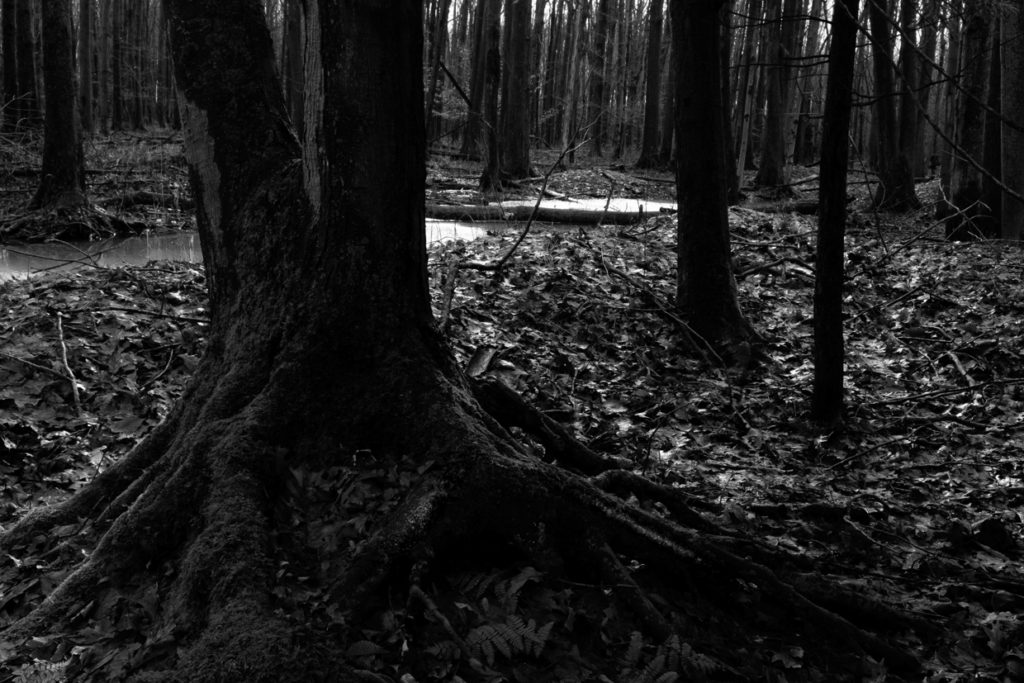 Living my entire life in the Niagara Region, it has given me a chance to explore and study this unique area of Canada. There are so many plants and animals specific to this area and since most of the area is now the most densely populated area of Canada, we have to protect and capture – and preserve, both literally and in images –  what we have left. 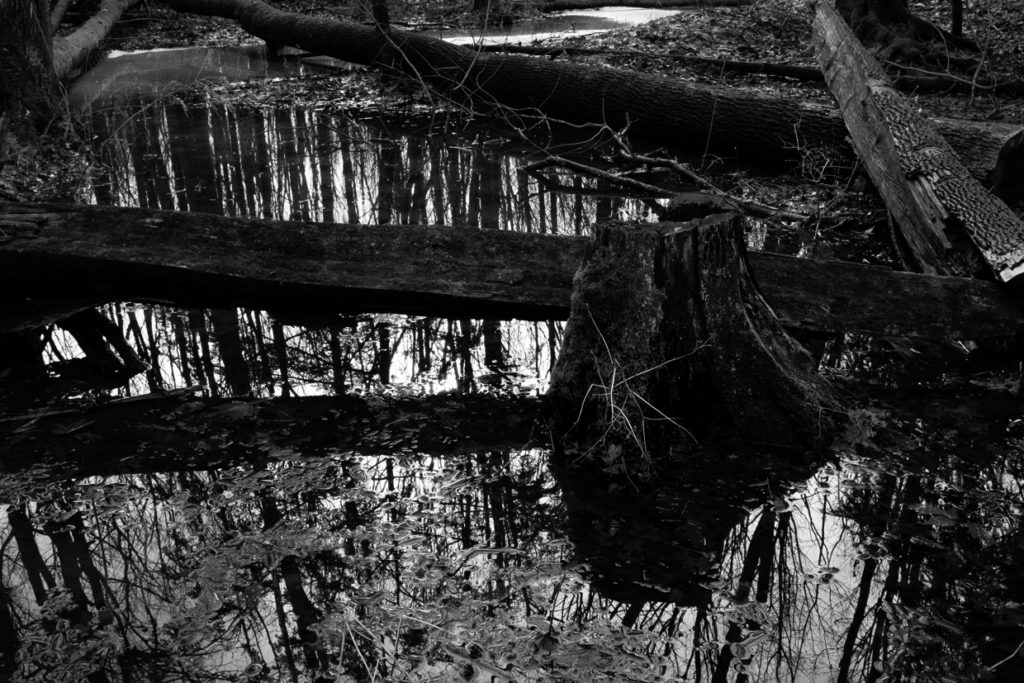 This is how I see the beautiful area that millions of people fail to notice each day, and I hope to introduce them to this vibrant ecosystem that is essential to Niagara.” 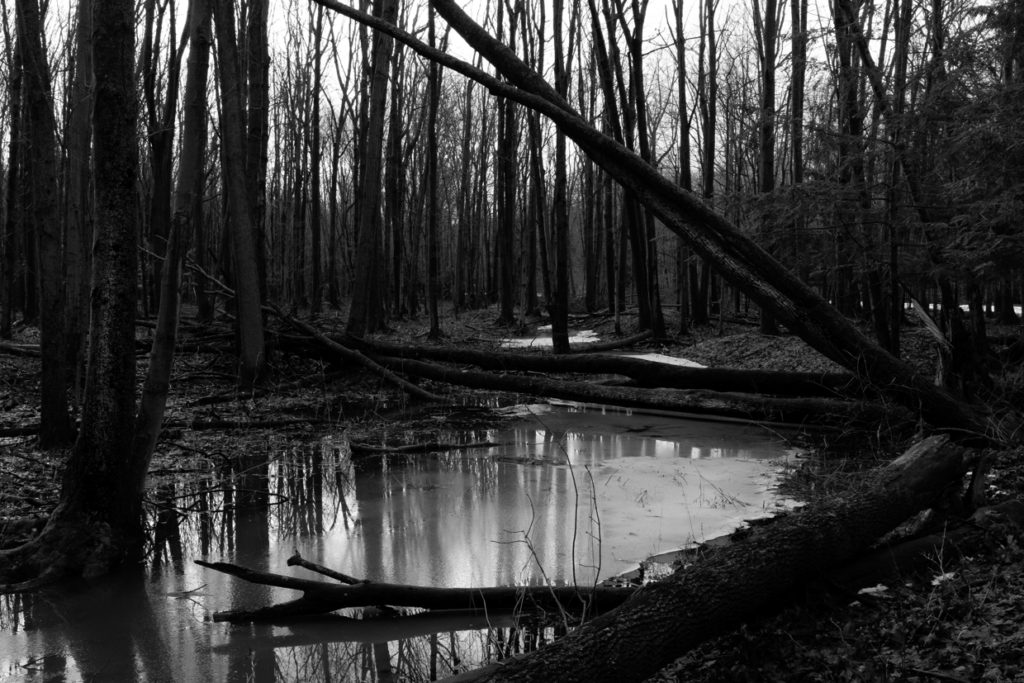 In an immediate visual manner, the scenes Smith presents here are a strong contrast to previous images which were captures of buildings, both active and abandoned (such as those which were exhibited at the Mahtay Café, which I talked about here). However, those urban scenes were nearly always empty of people, alluding to a post apocalyptic ruin. These were snapshots of Joel’s immediate world, often taken to capture a moment. This abandoned aesthetic was challenged by an intensity of colour (very blue skies, flat and solid like they’ve been hammered in place, or with architecture that mimicked a hard edged post painterly abstracted work). But of late Smith has been working, if not exclusively in black and white, then in a manner where monochrome is the default but also the intended final rendering of the images. He’s commented that this is to make the viewer more able to ‘enter’ the scene, to see the details and appreciate the larger whole of the picture, and not necessarily be seduced by a splash of colour distracting the eyes from the whole.

Several of the Carolinian landscapes that Smith had in the exhibition in Cayuga are entirely different in colour: when he showed these preliminary, or in progress, works to me, the mosses were like a Riopelle or Mitchell, and seize the eye and won’t let go (and this is something that is evocative in his ‘mushroom’ works, but I’ll come to those shortly). But – the dark, foreboding forest scenes that beckon as well as warn, in a quiet unease – this brings to mind the romantic painter Caspar David Freidrich: his Monastery Graveyard in the Snow (Cloister Cemetery in the Snow) is muted and monochromatic. Colour would destroy the atmospheric success of this work from the early 1800s. The subltety and softness is very grey, both literally and conceptually: just as the deep blacks in Smith’s works, and the controlled tones privilege the reflections and textures in a more emotive manner. 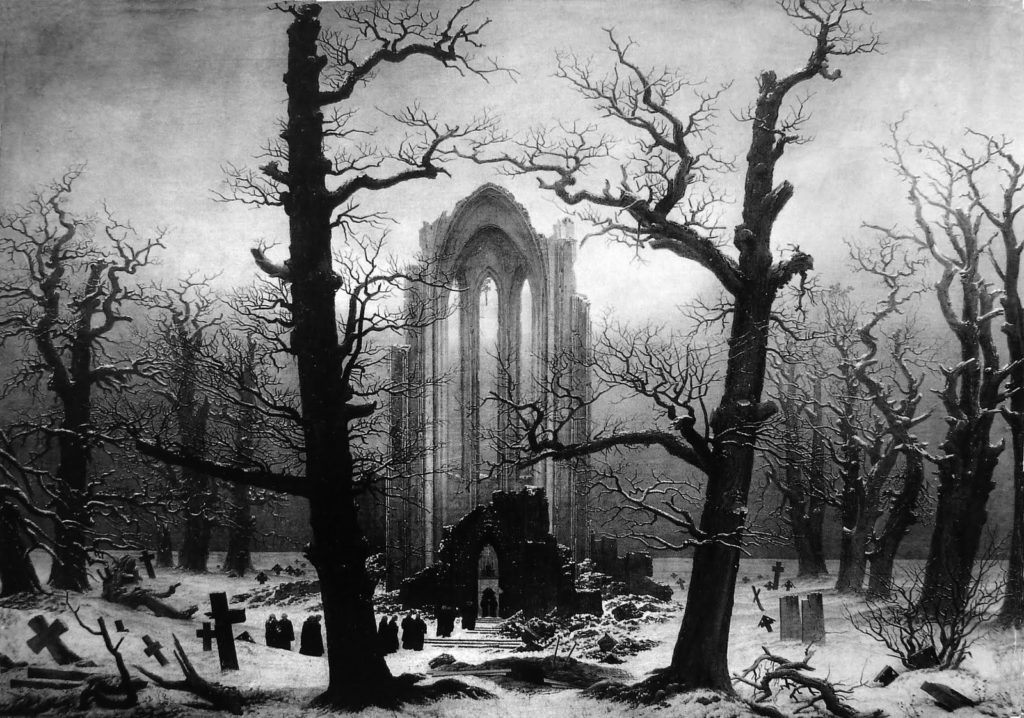 The earlier works of Joel’s I mentioned were ‘taken’ from his immediate experiences, parsed from day to day walking or cycling around Niagara. When we spoke of the Carolinian works, and I was helping him select works to be exhibited together, we chose a selection that he related (with amusement) were all taken within about eight feet of each other, in the forest, like a cinematic moment frozen in a still experience. One can see ‘landmarks’ of fallen trees in several images that suggest this, like a panoramic where where you ‘stand’ shifts, but you’re still alone, enveloped by the dark forest, with little evidence of any other human – or even animal – evident. 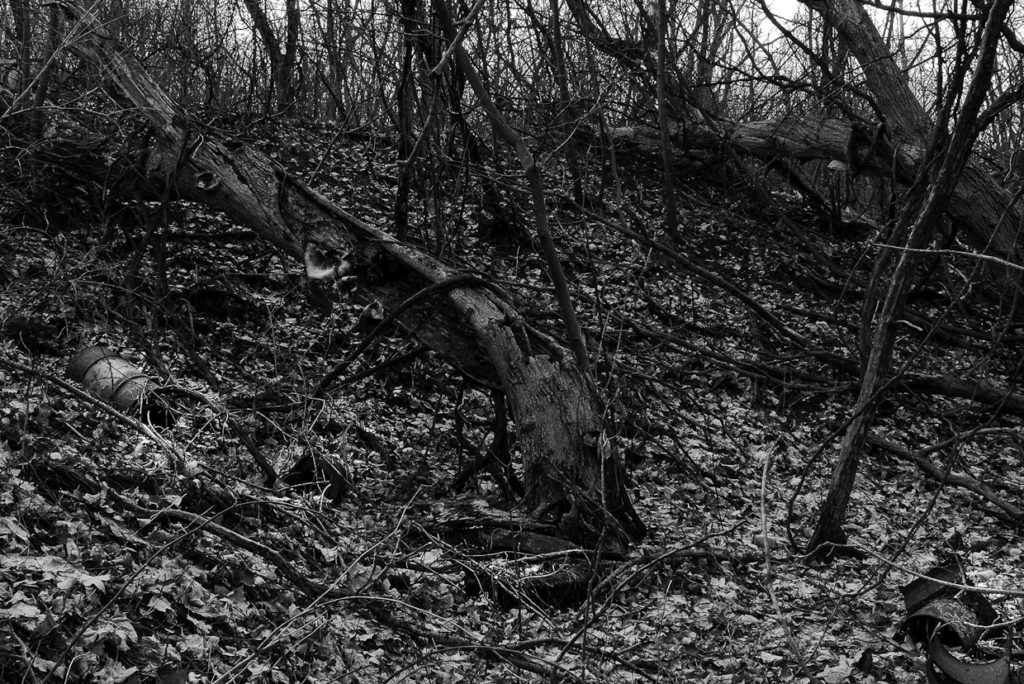 This employment of landscape as an emotional evocation is a common, but never tiring, trope. Smith shares ‘common ground’ with the photographs of Fiona Annis, especially several from her The After-Image (Swan Songs) series that I experienced on the Prairies. Annis also alluded to a story, and – like several of Smith’s works – almost invited you to step into them. These often dark, quietly morose vignettes were ostenibly about not solely death but a contemplation of endings. She spoke of her work in this manner: “I explore the swan songs of a selection of artists and intellectuals who produced final works intimately connected with their deaths.” Further: “The After-Image (Swan Songs), seeks to record echoes etched in landscape, and acts to engage the physical locations of these swan songs as a point of departure for a sustained meditation on final acts.” Swan songs, if you’re unfamiliar with the term, might mean anything from a fine artistic opus, often from a mature or older artist, soon to be gone, or as Annis implies, might also incorporate a hint of suicide, or of choosing one’s own ending, in a dramatice finale. 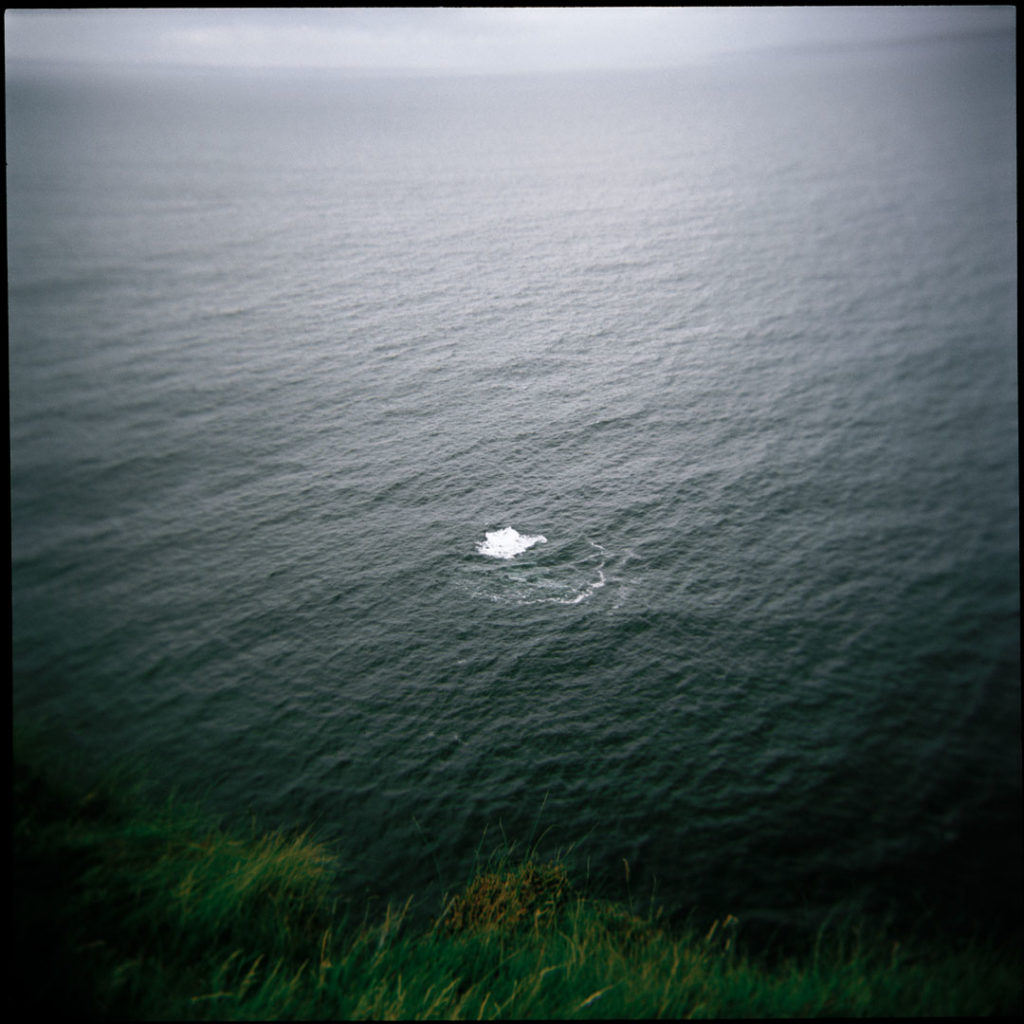 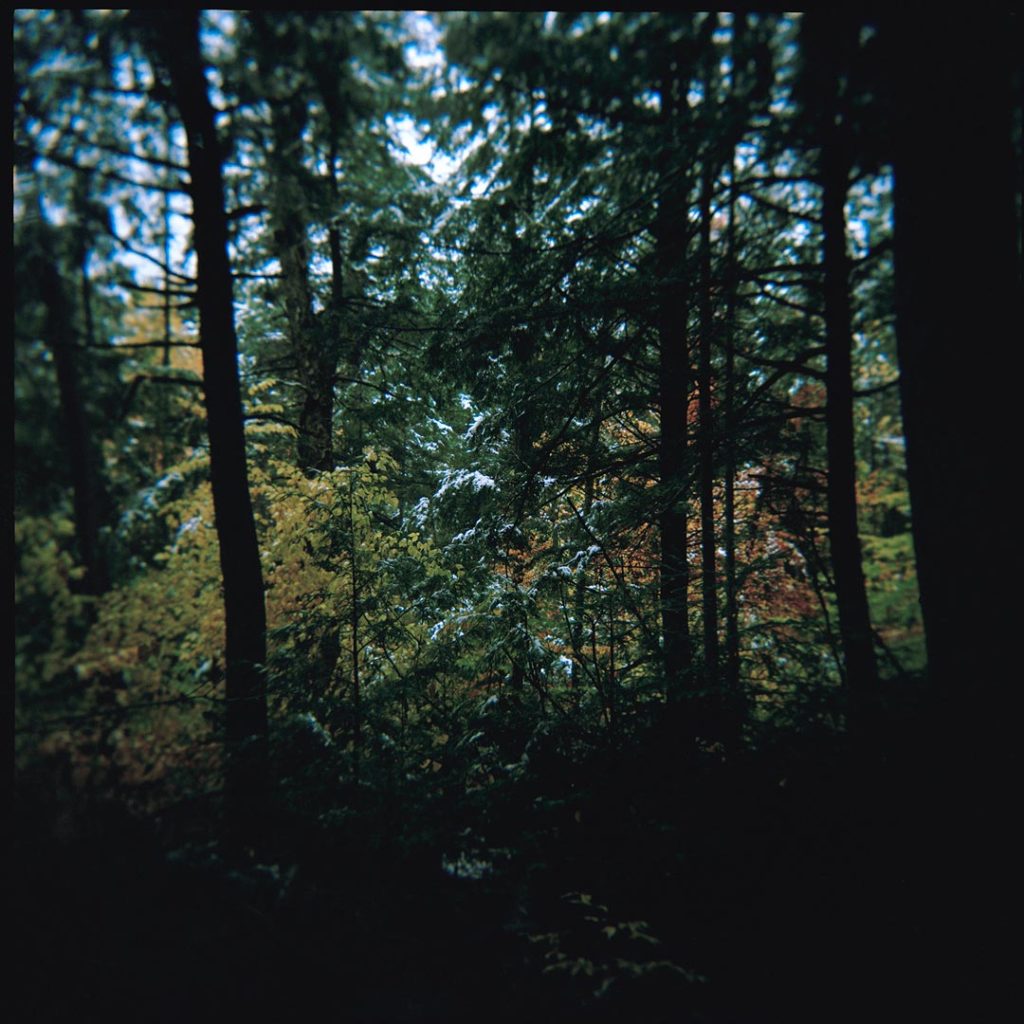 Annis (in the iteration of images I stood among, nearly a decade ago) focused upon Virginia Woolf, but I find myself returning to another British writer, T.S. Eliot, when looking either at her works or at Friedrich’s cemetery or Smith’s Carolinian Forest: I have heard the mermaids singing, each to each. I do not think that they will sing to me. Or in revisiting the silence of Smith’s works, the words of Eric Hoffer: It is loneliness that makes the loudest noise.

But let’s take a different turn for a moment: Smith’s practice is diverse (as demonstrated by the current pieces I’ve speaking about here in contrast to his urban scenes from several years ago, or even his larger floral works, that in some cases document the brief, but beautiful vibrancy and withering of these blooms). I’ve been lucky enough to have seen a large number of his photographs, and thus his ‘mushroom’ works, as he refers to them, are also lovely images that take another approach to the conceptual power of landscape. Whereas the forest scenes offer a macro view, the mushrooms bring you right down to the ground, making the tiny grandiose, yet offering contemplation of something we might not notice, or would ignore. 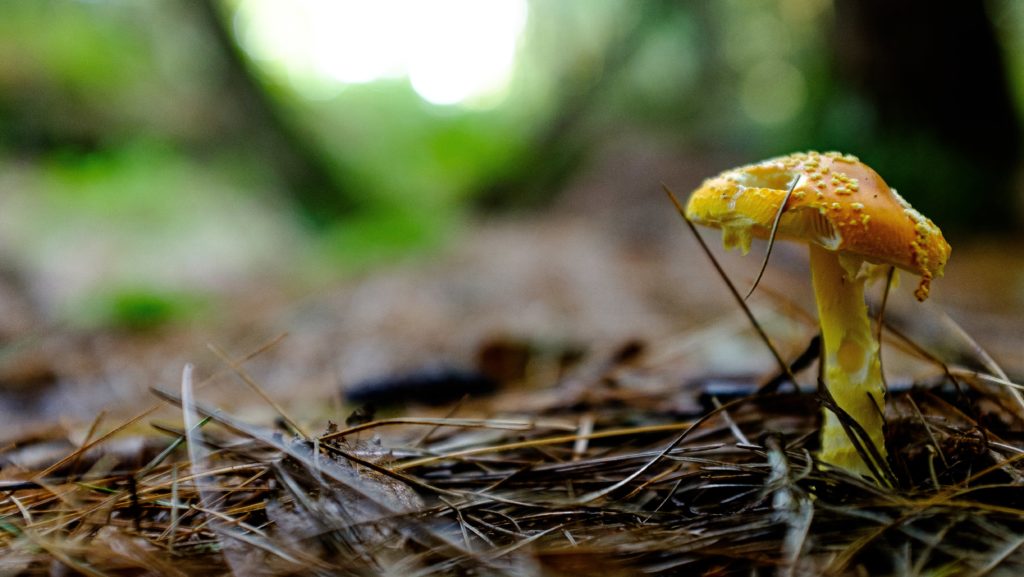 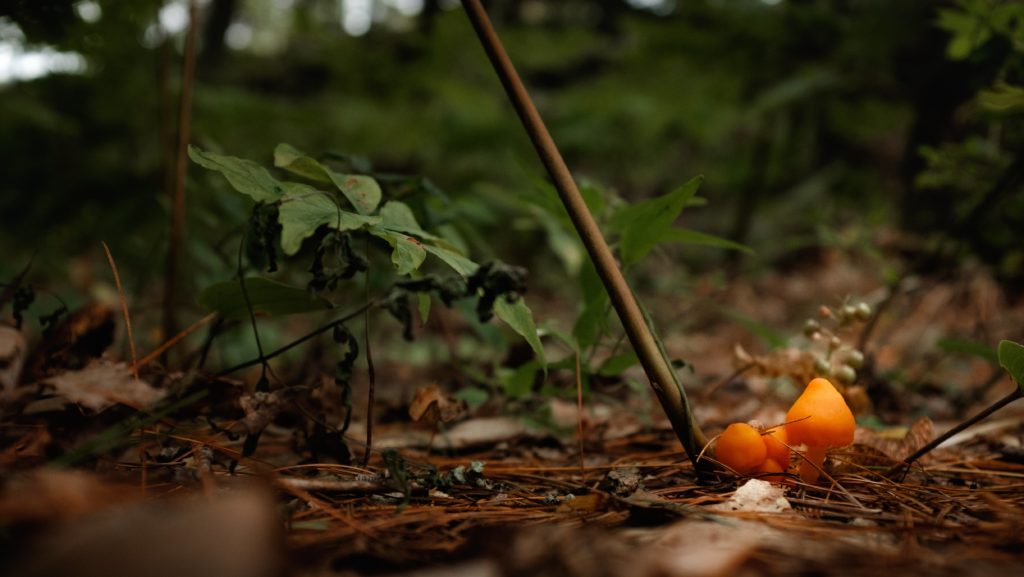 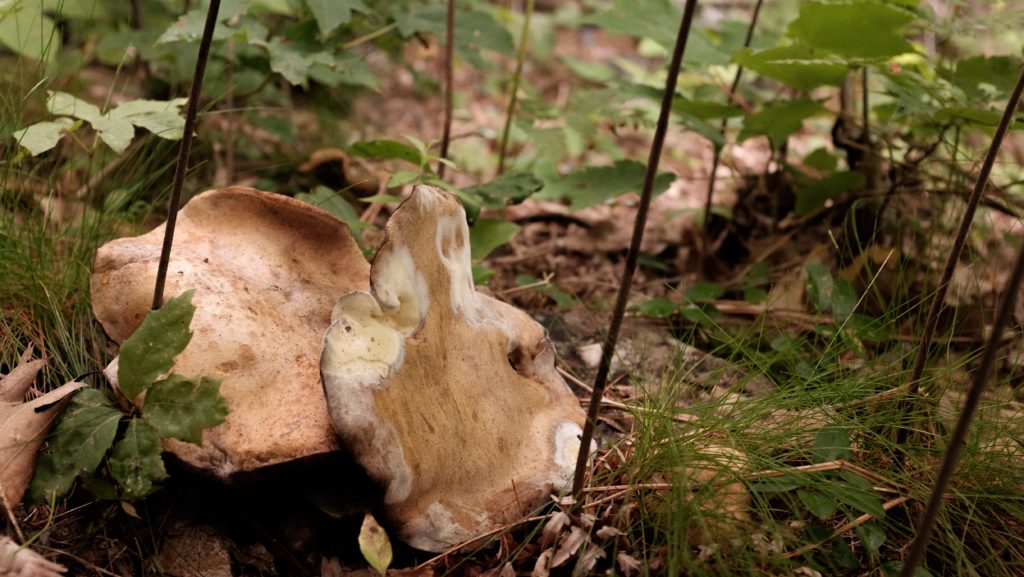 There’s a sentiment expressed in a story by Alan Moore (from his excellent run on Swamp Thing – but don’t dismiss graphic novels, as their quality of writing is as fine and diverse as any other medium). In this story arc, a character is seeking to understand about evil, and is told that “Where is evil, in all the wood?” Later, he comes to understand “that both good and evil seems connected in some way, that life itself springs from the decay of the black soil, and this connection is what the Parliament of Trees has led him to think on. In the end, thought, he still admits that he does not know what they meant exactly.” (This was articulated here, which I reference).

Smith’s works here – both the mushrooms, but also the ‘bigger’ landscapes – are also informed by the passing of his brother, and hence the solemnness of his eye, as well as the quietude of the scenes he shares with us. There is a meditative quality here, that is not so much about ‘being alone’ as being alone in this space, with your own contemplations and considerations.

There’s another author whose words flowed into my mind, in standing before Joel’s almost haunted landscapes, while also considering his tiny, delicate fauna on the forest floor: “I have heard the languages of apocalypse, and now I shall embrace the silence.”

Unless otherwise indicated, as with the images by Annis and Freidrich, all images are by Joel Smith, and copyright is his, with all rights reserved. You can see more of his practice at his own site.

Bart Gazzola is an arts writer, curator and photographer based in Niagara. He’s published with New Art Examiner, Canadian Art, BlackFlash Magazine (where he was editorial chair for three years), Magenta Magazine and Galleries West, and was the art critic at Planet S in Saskatoon for nearly decade. His most recent curatorial project was Welland: Times Present Times Past (2020) at AIH Studios in Welland. He’s currently assistant editor at The Sound: Niagara’s Arts and Culture Magazine, where his ongoing series on Brock University and Rodman Hall Art Centre earned him a St. Catharines Arts Award nomination (2020).