The COVERT Collective is pleased to be participating in Femme Folks Fest 2022. Karolina Kuras is a renowned photographer of ballet and is the photographer for the National Ballet of Canada. Her work currently adorns the historic Carnegie Library on Albert Street in Uptown Waterloo.

This story was previously published in the Winter 2020 issue of PhotoEd Magazine. You can purchase a copy here. 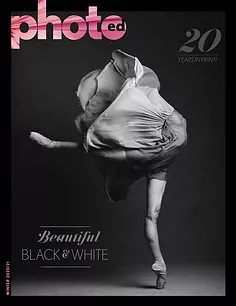 Sixty years ago, the canon of photographic images of dancers consisted mainly of posed practitioners, held static by the constraints of the medium in a most unnatural state. And while these photos are beautiful in their own right, as evidenced by Baron de Meyer’s photos of Nijinsky and Steichen’s shots of Isadora Duncan at the turn of the last century, dance is about movement. It is the freedom to momentarily loose oneself from the bonds of earth to express the most artistic interpretations of romance, flight, and fluidity.

Karolina Kuras had an early start as a dancer, a self-described “bun-head,” in her native Poland. She is also an exceptionally talented photographer and has combined these seemingly disparate sensibilities as the primary photographer for the National Ballet of Canada.

Karolina grew up in what she describes as “essentially a hippy, Buddhist commune in the mountains of communist Poland.” Many in the community were artists, her mother a painter, and her father a classical musician. Both dabbled in photography. She started taking ballet for the love of it and found it helped her overcome her shyness.

At age 5, the family moved to Guelph, Ontario. In high school, her teacher encouraged her to try photography. Karolina began working with a local portraitist as a darkroom technician. When that photographer moved her studio to Hamilton, Karolina acquired most of her mentor’s Guelph clients. By her late teens, she was already running a serious business.

Her passion for ballet led to Karolina photographing friends still involved with dance in her spare time. These personal projects soon became her primary focus; today all of her photography is dance focused.

Both her love of dance and growing up in a heavily arts-infused space strongly influenced Karolina’s aesthetic. She prefers “storybook” ballets, including Romeo and Juliet, Sleeping Beauty, and, her favourite, Giselle. Edward Weston, Jock Sturges, and Irving Penn are three photographers she cites as having left a mark on her signature style. These ballet productions and visual artists can all (arguably) be described as romantic. As seen in Karolina’s work, these photographers have a way of capturing images that render their subjects timeless and somewhat mysterious.

“Growing up there were always cameras around,” Karolina says. “My parents developed their own black and white photos in the darkroom.… I grew up with black and white.”

Karolina says that while she has seen many photos of cousins and extended family in the eighties that showed their “cool and colorful” clothing, photos of her immediate family look as if they were taken in the fifties: “I think black and white is just a little bit more dreamy and soulful. There’s something about it that is other-earthly. Colours are almost too real, where [black and white] feels a little more abstract. Nostalgic.” After a moment’s reflection she states, “I feel like my soul is black and white.”

Indeed, her first love in photography was for black and white film images. She has a collection of older 35mm and medium format cameras, but her prized possession is her Linhof Technika, a gift from her husband. “Everything that comes out of ‘him’ is magic,” Karolina says. She likens the discipline of large format capture to the discipline required for ballet. “It’s a very mindful process.”

Like most photographers, she uses digital capture for her professional workflow, not only because of the cost differential, but because digital is much more adept at capturing the nuances in the movement of ballet. Her current lineup of tools includes a Canon 5D Mark IV and a Fujifilm X-T3, although she has her sights set on a Canon EOS R5 mirrorless camera.

Her photographic process relies heavily on the muscle memory developed by years of dance. She knows exactly where to be at a precise moment to capture a dancer in perfect form and position. They seem less anchored to the floor than gliding through the frame, capturing the inherent romanticism of the story being told by the movement. Her dance experience also allows her a knowing and easy rapport with her subjects, who permit her to capture them in unguarded moments that other photographers would not be welcome to.

Karolina keeps her setup as simple as possible, preferring natural light in studios with large windows, or single lights with softboxes to emulate that feeling. “I’m always experimenting with my approach to light,” she offers. She uses prime lenses almost exclusively for studio shoots and relies uncharacteristically on 85mm glass. “An 85mm lens tends to elongate your subjects a bit, and dancers want to be as long and lean as possible,” she says.

COVID-19 is a concern for all photographers. “On the list of essential jobs, mine is close to the bottom (with professional ballet companies),” Karolina says. “There are 85 other people to pay before they pay me.” Yet, ever the optimist, she adds, “There is a lot of new opportunity to create new content now.” Video is becoming a new focus for her, with new multimedia projects moving forward during the pandemic.

Karolina’s work may prove to be a lifeline in a time where professional performing arts struggle to stay relevant. While waiting for dancers to alight once more on the stage, her images keep reminding us of the beauty of ballet and our souls alive in the promise of its return.

Karolina Kuras is a Toronto based ballet and portrait photographer, creator of The Company Project and photographer with the National Ballet of Canada.

CBC Story: This breathtaking photography will make you wish you were a ballet dancer

If you love Karolina Kuras’ work, you’ll love the BEAUTIFUL B&W edition of photoED magazine. Get your copy IN PRINT delivered today!