In Harry Turtledove’s Worldwar / Colonization books, he builds a world based upon what might happen if aliens invaded during the midst of World War II. He’s a fine writer of historical fiction, and I recommend any of his books (many are less fantastical, if that’s your taste): but in this one, as the aliens set down their motherships, and discover places like Auschwitz, Buchenwald, Dachau, Ravensbrück, Kraków-Płaszów – I’ll stop there, to preserve sensibilities – and many others, they are horrified that our species engages in wholesale, industrialized slaughter of each other. The aliens see us as monsters, beneath any kind of communication, if this is what we’ll do to ourselves. What is interesting, as well, in the book, is that the Jews of Łódź, in Poland, ally themselves with the invaders, as this is a finer option for survival than either the Nazis or the Communists….and one might ask what that says about humanity and about Menashe Kadishman’s art and appropriate, if alarming, resignation in the face of horror.

A video documenting the work, and people’s interactions with it, can be seen here. Perhaps you will find the noise as unsettling – as offensive – as I did, with people trodding upon the ‘faces’ of the ‘dead’ (but it’s not like we don’t do that everyday, literally and metaphorically….and that unsettling fracture is surely what Kadishman intended). In imagining walking over that floor, and my footfalls being loud and obtrusive in this meditative, almost funerary space, one of my favourite (dissident, and survivor of the Soviet gulag) poets – Anna Akhmatova – comes to mind, with her words, seemingly almost written for this space:
I have made a shroud for my friend,
Sad cloth.
She loves, loves blood
This Russian earth. 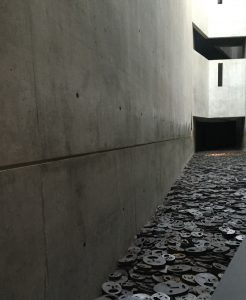 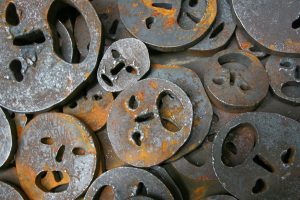 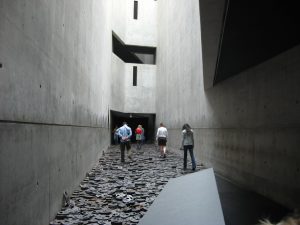 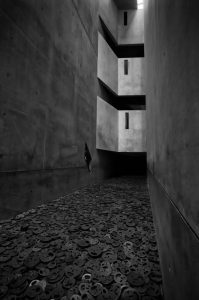 More facts about Shalechet: “Located in the Jewish Museum in Berlin, the installation consists of over 10,000 iron faces strewn across the hall. The iron discs are individually-cut, screaming faces, some reminiscent of the face in Edvard Munch’s The Scream (1893). The audience is prompted to walk on the anonymous faces while hearing the metal crack under their feet. The sound of metal-on-metal reverberates in the space recalling sounds of forced labor or of trains arriving at a concentration camp.

The name “Shalechet” (“Fallen Leaves” in English) comes from the poem “Soldiers”, written in the trenches of World War I by Italian poet Giuseppe Ungaretti: “We are like leaves on the trees in autumn”. Much like the turning leaves, the faces in the installation also change overtime: they are altered by rust and debris, and the molten metal hardens on the edges and inner spaces of the facial features. The leaf represents the cyclic transformation in nature, that can be compared to the different stages of life. In Shalechet, Kadishman provokes a potent experience to instill his humanist message, one that acknowledges collective human suffering and hopes for a new life in the spring.” (This quote, and the previous one describing this artwork, are from here).

But I should end with how the last book I read that centered upon the Holocaust was fiction: The Disappearance of Josef Mengele, by Olivier Guez, translated from the original French by Georgia de Chamberet.

Guez’ closing words in his book serve as an appropriate epilogue here, too: Every two or three generations, as memory fades and the last witnesses of past massacres disappear, reason is eclipsed and men return to propagate evil.
From all ill dreams defend our sight, from fears and terrors of the night.
And keep us on our guard. Be wary, man is a malleable creature, we must be wary of men.

Images are from the Jewish Museum in Berlin and The Art Story, respectively.