I am old enough to remember when Chernobyl happened, and like many events it has become larger in the public consciousness as the years pass. In some ways, my time as a teenager had numerous events that have shaped history, as I also remember being in my high school history class and discussing the fall of the Berlin Wall, which happened a few years later.
One can’t speak of the fall of the Soviet empire without citing Chernobyl: Emmanuel LePage, in the graphic novel Springtime in Chernobyl (2012), asserts that ‘the disaster in Chernobyl is the first nail in the coffin of the Soviet Bloc.’ It is not unintentional, I think, that this metaphor is employed after an earlier passage where a widow describes the elaborate entombment of her husband’s irradiated body, like a pharaoh’s sarcophagus to hell instead of heaven…

It has become a touchstone for many artists in a variety of mediums. Some use this disaster as a means to a larger conversation. Others remind us of Stephen King’s Blind Wille reminiscing about his time in Vietnam (from Hearts in Atlantis), admitting it had much to “teach him, back in the years before it became a political joke and a crutch for hack filmwriters.”

In writing about his series Chernobyl, Half Life (2004), Nadav Kander offers the following:

“Reactor No.4 at Chernobyl’s Nuclear Power Station exploded in 1986 leaving the surrounding area uninhabitable for many hundreds of years to come. It happened to be the 20th Anniversary since the explosion when I gained access as an artist to visit Chernobyl, photographing the deserted spaces in what was once a model Soviet City.

Home to more than 40,000 people, the apartments, schools and hospitals that were hastily left following the controversial evacuation are stark reminders of past lives, leaving a disturbing sense of quiet. An uneasiness that I had never previously experienced. 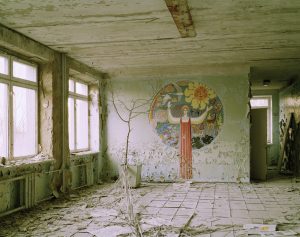 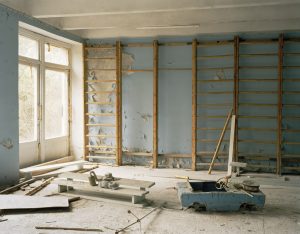 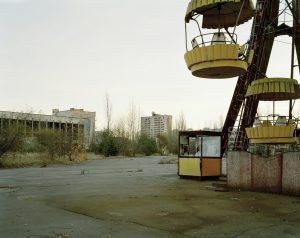 There is a great beauty in a very real way to be found as the poignancy of human suffering almost hangs in the air. I found myself with a familiar feeling; best described as the feeling when walking through an overgrown cemetery on a drizzly day, but what I was looking at was far from familiar.

Having grown up with stories of relations of mine including my Father with his family that were suddenly evacuated during the second world war, I could not help but feel quite profoundly shocked as well and at the same time wonder what it must have felt like to suddenly leave your home and be transported to an unknown destination, suspecting that the near future would probably bring severe ill health due to being exposed to large doses of radiation. Little is known about the radio-active affects on the people of this city as the population were dispersed all over Russia. If there was a gathering of data by the government, it was never reported.” 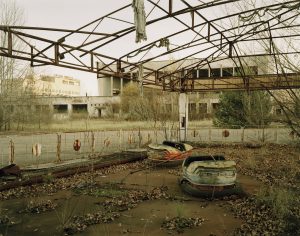 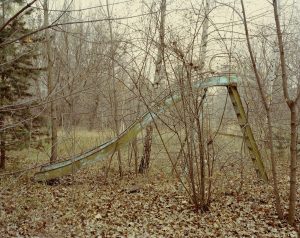 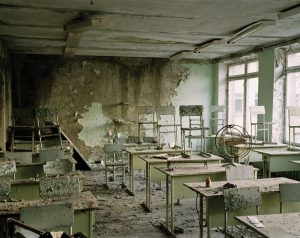 I’ve selected a few of the images from this series, and most of them are focused upon spaces that would be set aside for children. Kindergarten Golden Key, Sleeping Room evokes a memory of visiting Spring Hurlbutt’s The Garden of Sleep / Le Jardin du Sommeil, which was also a contrasting beautiful space to meditate upon the death and loss of children, and both provide a focus for grief.

Akhmatova’s words from half a century earlier act as a fine narration of these images: as an addendum to this pick, I’d also suggest the series Chernobyl, as it also focused upon the reality of Pripyat residents, situated within a larger historical narrative (much like Ahkamatova’s poems do).

And, with Russia’s ongoing invasion of Ukraine, some historians are reminding us of past events like the Holodomor – and in some ways, Chernobyl fits within this – where an ’empire’ exhibits cruelty and disregards humanity, whether through malevolence or ignorance, and sometimes I see Chernobyl through this lens, as well….

There is a surfeit of cultural commemoration or interpretation of this event and some is better than others. Kander’s work is quietly unsettling, even after all these decades.

More of this series can be seen here.
IG: @nadavkander