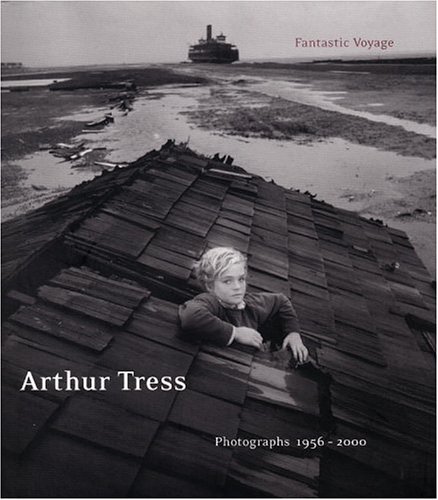 There was a recent exhibition of Tress’ photographs mounted at Stephen Bulger Gallery in Toronto, and that brought his work back to mind. Having enjoyed several of his books, I returned to this one – which is, for me the definitive publication of Tress’ art and aesthetic – and it’s definitely worthy of a Library Pick.

Tress’ works are striking, if unsettling. An initial amusement or facile reading gives way to a more conflicting or uncanny narrative upon closer consideration. He shares this with photographers like Ralph Eugene Meatyard, Mary Ellen Mark, Diane Arbus and – an artist featured in a previous Library Pick – Roger Ballen.

“Tress started out as an ethnographic documentarian but, partly inspired by the rituals he recorded, turned to ever more premeditated subjects. In an early project, he asked New York children to tell him their dreams and then posed them, with appropriate trappings, in neighborhood spaces to illustrate their sleeping fancies. His projects since the mid-1980s involve arrangements of tools, toys, furniture, dolls, and other stuff that Tress paints and lights to suggest scenarios and even narratives. Besides the short-term projects, Tress has made surrealist outdoor still lifes and male nudes over longer periods. The latter, including some of his best-known pictures, are implicitly homoerotic but considerably more apprehensive and even dread-filled than the nudes of fellow gay surrealist Duane Michals. But there is more humor and less darkness in Tress’ highly polished work…” (from Tress’ site, which is worth spending some time exploring, as well)

“Arthur Tress’s career can be seen as a long fantastic voyage – from early photojournalism into the realm of surrealism, eroticism and miniature worlds. This retrospective is an overview of Tress’s career. As the title implies, Tress’s work is full of fantasy – nothing is what it at first seems. His images contain dark undercurrents and light wit, violence and beauty, futuristic scenes and homoerotic and psychologically charged tableaux. The 250 images featured in this volume range from the early black-and-white work to the richly coloured surrealistic images of the 1990s and his latest, previously unpublished work in progress. Richard Lorenz, (curator of a retrospective exhibition in Washington, DC, in May 2001) offers an in-depth biographical essay on Tress and the development of his vision. An essay by noted photo critic John August Wood puts Tress in context.” (from here)

The images I’ve shared here are from the bodies of work by Tress that are my favourites – primarily Dream Collector (1970 – 74), Theater of the Mind (1976 – 77) and Still Life (1981 – 83): but there’s other series in this book that are very different, and a testimony to the breadth of his aesthetic and career. These include the starkness of his documentary work in Appalachia (1969) to the uncanny quality of his Fishtank ‘installations’ (1989) to the moribund garishness of Hospital (1985 – 87).

From the Corcoran’s review of this publication: “Tress’s work, above all else, reveals a personal approach to photography, a subjective view of the world that continually reinvents itself while it ponders universal archetypes and myths.”

Arthur Tress was a previously featured artist in AIH Studios’ ongoing Artists You Need To Know series: that can be enjoyed here.