In: artists from Peru 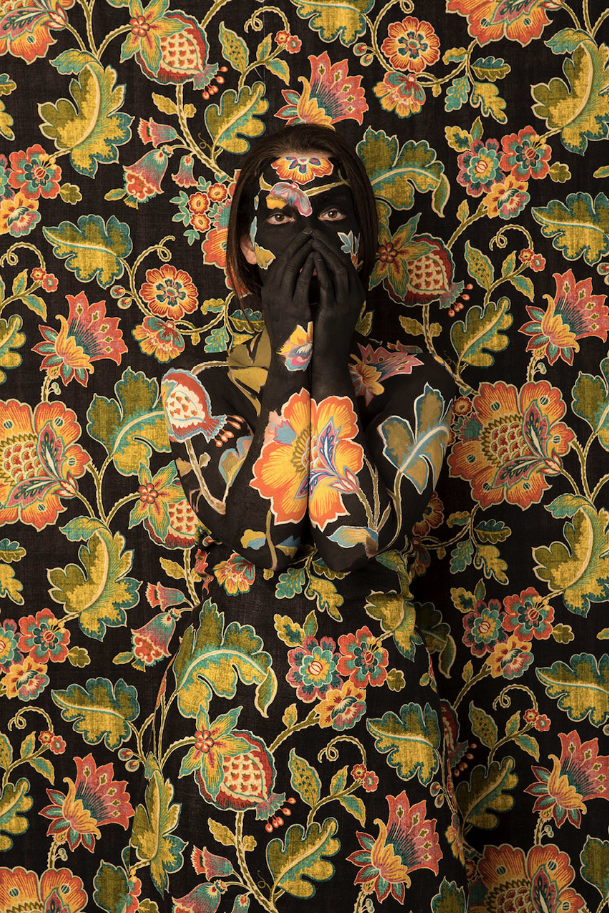 “I’ve got out at last,” said I, “in spite of you and Jane. And I’ve pulled off most of the paper, so you can’t put me back!”
Now why should that man have fainted? But he did, and right across my path by the wall, so that I had to creep over him every time!”
(The Yellow Wallpaper, Charlotte Perkins Gilman)

Paredes’ self portraits are unsettling: in this one, she actually makes eye contact with us, making it harder to ignore, yet easier to ‘find’ her, within the composition. Though her work is a performative metaphor for our relationship with the environment, one can’t help but also see a statement about women and the still too frequent dismissal of female artists, in her artworks. The ‘wallpaper’ of The Whisper – in conversation with a friend – brought to mind the story I cited at the beginning of this piece, which was published in 1892, and touches upon many of the themes I’ve mentioned. This story can be read here: but I offer a brief taste of its haunting narrative below.

The narrator devotes many journal entries to describing the wallpaper in the room – its “sickly” color, its “yellow” smell, its bizarre and disturbing pattern like “an interminable string of toadstools, budding and sprouting in endless convolutions,” its missing patches, and the way it leaves yellow smears on the skin and clothing of anyone who touches it. She describes how the longer one stays in the bedroom, the more the wallpaper appears to mutate, especially in the moonlight. With no stimulus other than the wallpaper, the pattern and designs become increasingly intriguing to the narrator. She soon begins to see a figure in the design. Eventually, she comes to believe that a woman is creeping on all fours behind the pattern. Believing she must free the woman in the wallpaper, she begins to strip the remaining paper off the wall.

‘Cecilia Paredes creates self-portraits that play with disguise and metamorphosis. She is known for a series in which she appears to vanish into a graphic backdrop. These “photo performances,” as the artist calls them, often involve her painting herself with bright, intricate patterns before documenting her body against a wall of the same motifs. Influenced by nature, Paredes also transforms herself into animals in realistic, glamorous studio portraits….Paying tribute to the flora and fauna of her native Peru, Paredes creates layered statements of her own identity. Her works also speak to humans’ relationship with nature and our responsibility to threatened environments.’ (from here)

More of her work can be seen at her Instagram @ceciliaparedesarte and a longer article about this series can be enjoyed here.