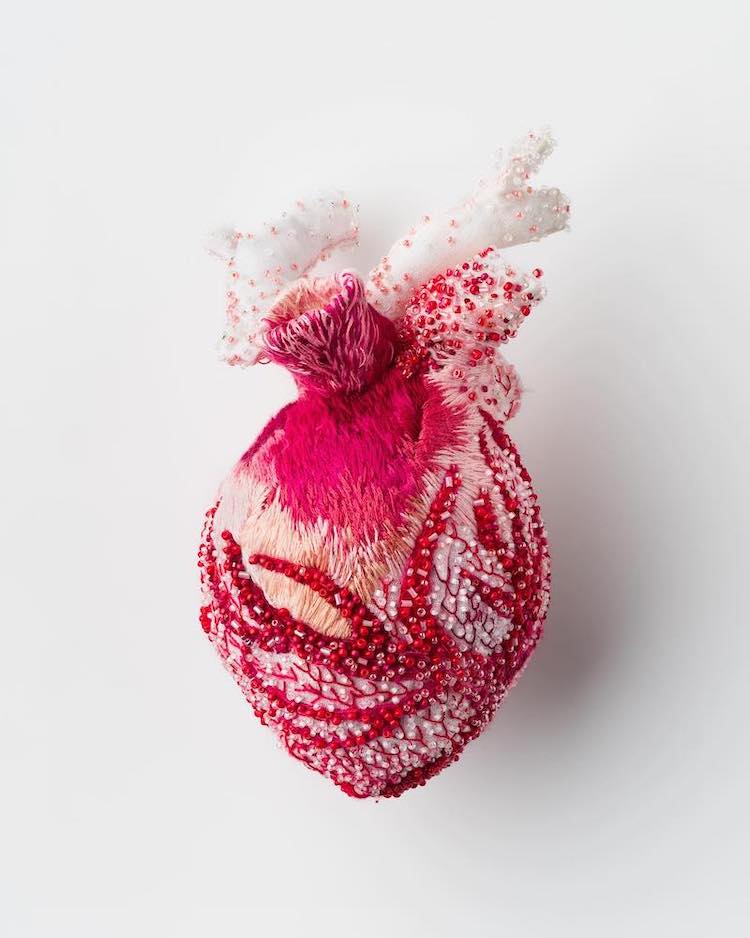 …as empty as an unremembered heart.
(Mervyn Peake, from his Gormenghast Trilogy)

I was born in Japan and grew up in a traditional Korean Family. My grandfather kept a treasured family tree book for 32 generations, but it only included male descendants’ names, not daughters. In my art, I have always tried to celebrate women and their historical handcrafts. These sculptural hearts are made from embroidery, handwoven tapestry, and papier mâché to recognize and celebrate the silent behind-the-scenes domestic duties of women and represent not only her emotions but serve as offerings or amulets for her protection.
(Ema Shin’s words, from here)

Of late, I’ve been watching the series Motherland: Fort Salem. I’ve a weakness – if you wish to put it that way, but I prefer affinity – for science fiction and fantasy (something I’ve been told, along with my interest in horror, is ‘inappropriate’ for an arts journalist…you know, like how the ‘only real art is painting’, ahem, to cite some of the karaoke modernists I endured on the prairies). The ‘alternate worlds’ are what interest me. When I was consuming William Gibson’s books, I was always more fascinated by the subtle things in his stories, presented as more factual and less chimeric (that the USSR eventually – for all intents and purposes – is run by the ‘criminal’ Kombinant, with the Russian mafia having fully taken over the government, that a religious cult appears that believes god speaks to them through movies – only from a certain era, of course – or that another character makes a living testing logos and brands, as she has an immediate, allergic reaction to any kind of advertising…)

In Motherland, a different world exists than that which we occupy: one where the Salem Accords have forged an uneasy alliance between the Witches of Salem and the United States Government, playing out in contemporary times. Imagine a military industrial complex based upon the magic of witches (or more accurately, the power of women), and – this is the part that is of more interest to me – a society that has formed around that, marking a genesis even before the United States became the United States, that is very matriarchal. Small things stood out to me, about how social ‘norms’ and customs play out very differently in this ‘world’ than in our own, especially around sexuality, power, who is expected to lead and who is expected to follow, and how history – in Salem – is overtly defined by a female gaze, if you will. I say ‘overtly’, as I always remember Martha Langford’s Suspended Conversations: The Afterlife of Memory in Photographic Albums, and those outside the frame who define it, but still are unseen metaphorically as well as literally…..

Ema Shin is a Melbourne based artist who was born and grew up in Niigata, Japan: she studied traditional and contemporary Japanese printmaking in Tokyo and completed a Master of Fine Art Degree in Nagoya. Shin has exhibited widely in Japan, Korea, Australia and elsewhere. Prior to this series, Shin focused on a variety of printmaking techniques and mediums, including Japanese woodblock printing, papier-mâché, embroidery, book making, Urauchi (chine-colle) and collage.

This interest in the physicality of materials continued when, due to motherhood and the pandemic, Shin “began to explore tapestry and embroidery…her red embroidered organs and [three dimensional] human hearts are beautiful to look at, and deeply personal-political in meaning.” (from here)

These are the archival giclée prints of the delicate objects Shin has created as part of her Hearts of Absent Women series (all photographs are by Matthew Stanton), and are an edition of 50.

From her site (which has many of her other fine works, so I encourage you to explore it): “Shin aims to create compositions that express sensitivity for tactile materials, the contemporary application of historical techniques, physical awareness, femininity and sexuality to celebrate women’s lives and bodies.”