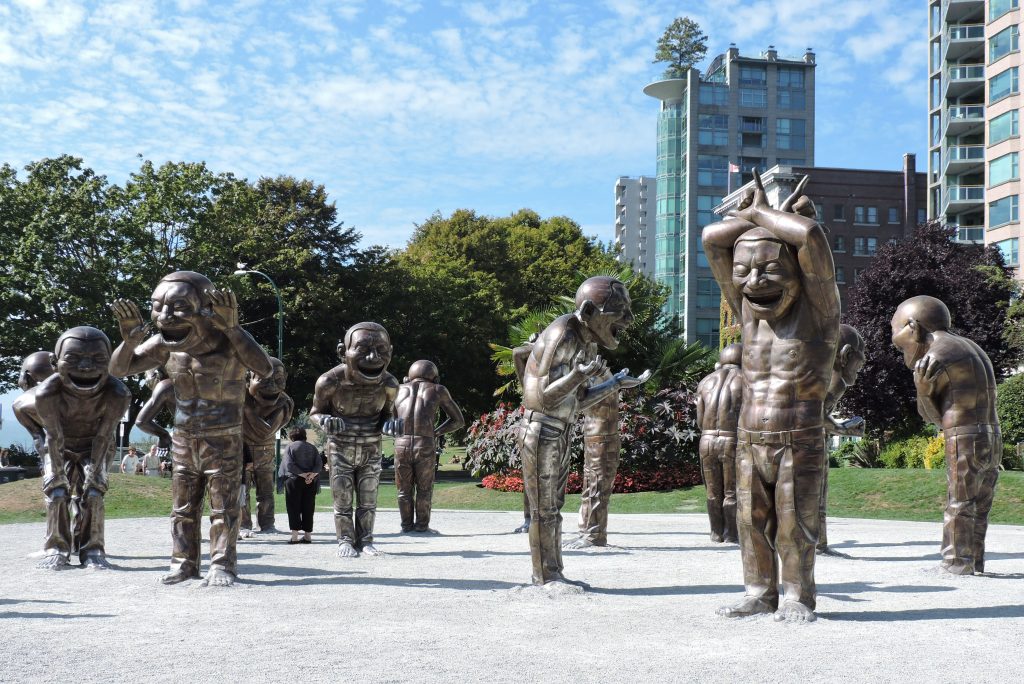 I NEVER knew anyone so keenly alive to a joke as the king was. He seemed to live only for joking. To tell a good story of the joke kind, and to tell it well, was the surest road to his favor. Thus it happened that his seven ministers were all noted for their accomplishments as jokers. They all took after the king, too, in being large, corpulent, oily men, as well as inimitable jokers.
(Edgar Allan Poe, Hop-Frog; Or, the Eight Chained Ourang-Outangs, 1849)

Art in the public sphere is often interesting: the intended meaning of the artist may be subsumed by the larger interpellation of the work by the publics or communities that interact with the artwork on a daily basis, or over extended periods of time. You don’t even need to consider the larger argument about monuments that proffer ideologies that were once celebrated and are now suspect (to say the least): Yue Minjun’s installation in Morton Park, in Vancouver, B.C., can’t help but have an unsettling quality, and critical analysis of his work has used the phrase ‘cynical realism’ repeatedly, though the artist seems somewhat neutral on that categorization….

Minjun’s larger than life characters are surely laughing at us, not with us – and their number, their intimidating nature, their grins and smiles that seem ready to eat us up, brought to mind Edgar Allan Poe’s dark story Hop – Frog (specifically the king and his ministers, with their ‘jocular’ abuses of those weaker than they) which I quoted at the beginning of this curator’s pick.

I do favour literary references when responding to visual arts, but this one is particularly apt. The synopsis of the story: The title character, a person with dwarfism taken from his homeland, becomes the jester of a king particularly fond of practical jokes. Taking revenge on the king and his cabinet for the king’s striking of his friend and fellow dwarf Trippetta, he dresses the king and his cabinet as orangutans for a masquerade. In front of the king’s guests, Hop-Frog murders them all by setting their costumes on fire before escaping with Trippetta. (from here)

But that description is a bit bloodless: Poe was erudite, especially in terms of more morbid, or caustic, turns of phrase, and his characters reflected this.

Hop Frog’s final declaration, in the story, and his last words before escaping, are these:

“Ah, ha!” said at length the infuriated jester. “Ah, ha! I begin to see who these people are now!” Here, pretending to scrutinize the king more closely, he held the flambeau to the flaxen coat which enveloped him, and which instantly burst into a sheet of vivid flame. In less than half a minute the whole eight ourang-outangs were blazing fiercely, amid the shrieks of the multitude who gazed at them from below, horror-stricken, and without the power to render them the slightest assistance.

At length the flames, suddenly increasing in virulence, forced the jester to climb higher up the chain, to be out of their reach; and, as he made this movement, the crowd again sank, for a brief instant, into silence. The dwarf seized his opportunity, and once more spoke:

“I now see distinctly.” he said, “what manner of people these maskers are. They are a great king and his seven privy-councillors, — a king who does not scruple to strike a defenceless girl and his seven councillors who abet him in the outrage. As for myself, I am simply Hop-Frog, the jester — and this is my last jest.”

Perhaps that scenario that Poe wrote – where those who mock are held to account – is a good one, to keep in mind as you wander the maze of these towering, awing figures that seem to cow us with their dramatic poses. But it would be remiss to not consider a less dour reading, which coincides with what brought these works to my attention – and that is from a recent rewatch I engaged in, focused on the iconic television series The X-Files.

To steal another’s words on this: Maybe the problem is that we’re confusing the mirror for the window and vice-versa. The fact that Mulder and Dr. They are discussing these provocative ideas among the fourteen statues that make up the “A-maze-ing Laughter” exhibit in Vancouver’s Morton Park adds another complicating layer. These bronze behemoths, each in a petrified state of hysterics, were conceived by the Beijing-based artist Yue Minjun as exaggerated self-portraits, and fall under the movement known as Cynical Realism, a response to the Chinese government’s oppressive approaches to aesthetic expression. Yet they’ve paradoxically brought such joy to a populace an ocean away that they’ve been made a permanent fixture of the Vancouver cityscape….Pain in one place begets gaiety in another, and even a calcified smile has the power to counteract, if not necessarily defeat, the despots. (from here)

All images are from Wikipedia Commons. 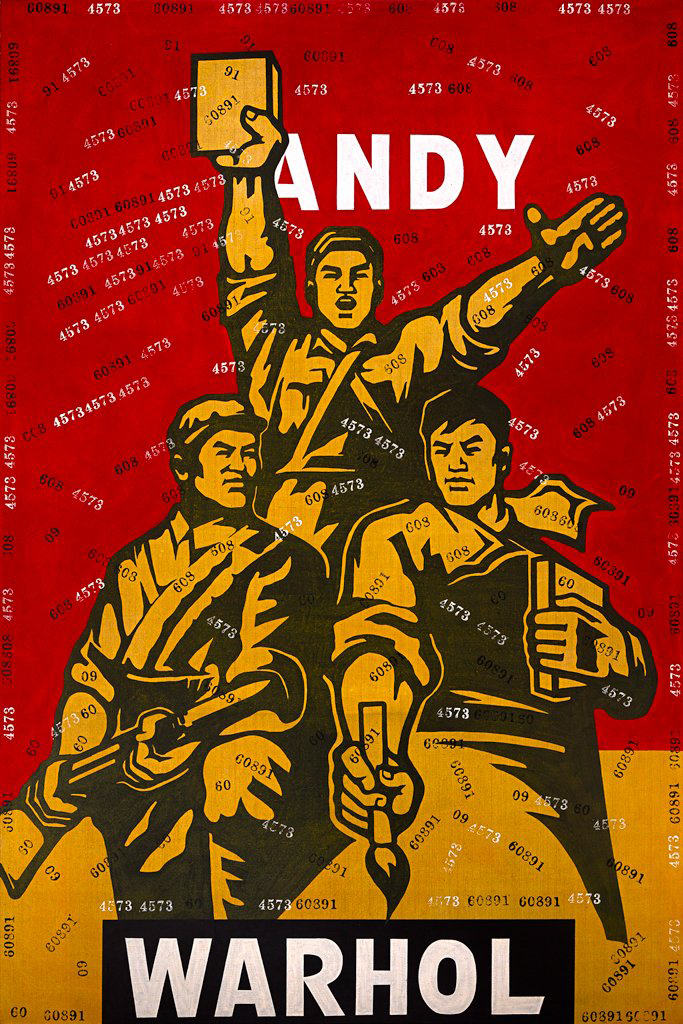