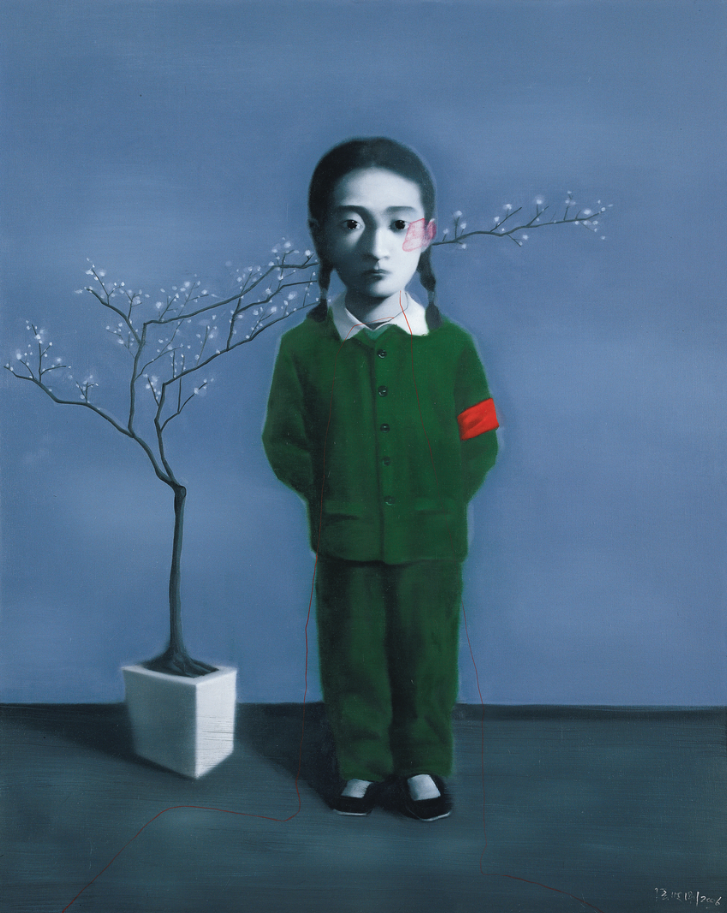 Several years ago, a friend suggested Jan Wong’s book Red China Blues: My Long March From Mao to Now to me. It was a memoir that touched upon major historical events, but always with a personal stance of Wong’s experiences as both the child of Chinese immigrants to Canada, but also as a person who, as a teenager in the late 1960s, was enamoured of Mao Tse Tung, and lived for some time in China during the Cultural Revolution. Years later – as chronicled in the book – she would be in Beijing when the Tiannamen Square Massacre happened. It’s a good book: Wong is a meticulous narrator, and spares neither her young self, nor larger mythologies of the State (whether China or Canada) from an older, wiser voice of criticism.

When I first encountered the work of Zhang Xiaogang, Wong’s stories of the Cultural Revolution (which she was protected from, being a Canadian still too anaesthetized by ideology over reality) immediately came to mind. Zhang’s figures are grim: they also make me recall a ‘joke’ from another friend, whose family fled communist Poland, about ‘Soviet photo face.’ This is the idea – which any cursory review of official photography from the USSR, or any totalitarian state, really, will reveal – that you must offer a facial expression, in all images, that is neutral, lest it be used against you later, and you find yourself in the gulag or a re education camp.

“Inspired by contemporary tensions in China, Zhang Xiaogang makes grim, unsettling portraits that consider identity and heredity in a collectivist state. The artist draws on influences that include political iconography, Chinese charcoal drawings, distorted Surrealist compositions, and family portraits from the Cultural Revolution era. His paintings, often executed in grisaille with bursts of bright yellow or red at the center, explore how varied individual histories are flattened into conformist representations.” (from here, where you can enjoy more of Zhang Xiaogang’s artwork) ~ Bart Gazzola