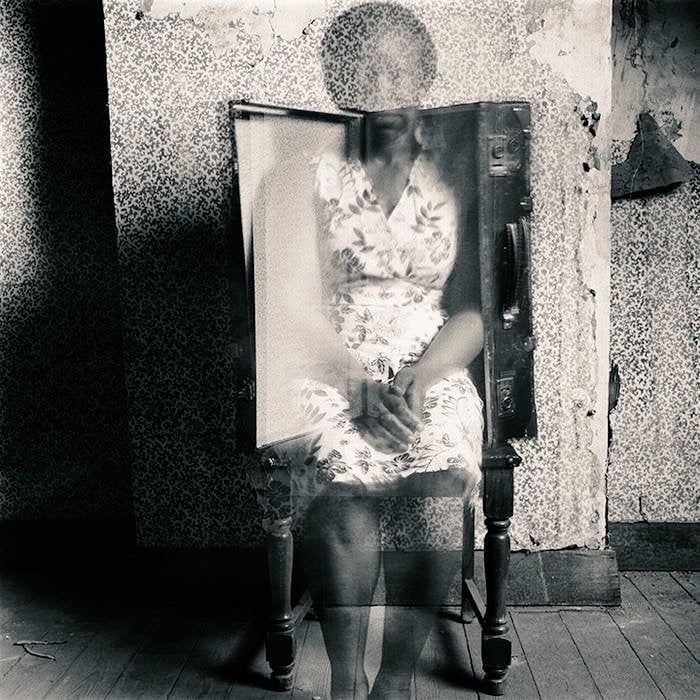 Foreigners forget their place (having left it behind). Given time, they begin to think of themselves as our equals. It is an unavoidable hazard. (Salman Rushdie, Christopher Columbus and Queen Isabella of Spain Consummate Their Relationship, Santa Fe, January, 1492, from his book East, West)

Rushdie’s characters are dripping with entitled sarcasm, in that story I cited. They could never imagine themselves as being foreign, or displaced, or not the gatekeepers – or the owners – of a place. Hélène Amouzou’s images from her series Between the Wallpaper and the Wall, Belgium/Togo, 2004-2011 originate from the opposite side of that conversation, and the ghostly, ephemeral nature of her self portraits speaks to a doubt, a dismissal, even, that is too often the immigrant experience.

“They describe us,” the other whispered solemnly. “That’s all. They have the power of description, and we succumb to the pictures they construct.” (Rushdie, again, from the chapter Ellowen Deeowen, of The Satanic Verses, entailing the suffering of immigrants in a manner that is both a casual brutality and magical realism, where words become reality. If you’re familiar with this text, the idea that someone might fade from sight, like dissipating mist if willfully ignored, fits right in….).

Inspired by the work of Francesca Woodman, Hélène Amouzou creates her own distinctive and haunting imagery, which speaks of the contemporary issue of the displacement of people and those in exile. Born in Togo, Amouzou now lives and work in Belgium. The photographs were taken during a two year period when Amouzou was seeking asylum there and waiting for her official residency visa. She captures herself or her belongings (often her clothes) in an empty room with peeling floral wallpaper. In many of the images she includes a suitcase as a recurrent symbol of her state of flux and transit. She works with film rather than digital media, preferring the effects of chance and serendipity and she exploits the use of long exposures, playing with the photographic medium to create ephemeral and ghostly self-portraits. “Self-portraiture is a way of writing without words,” Amouzou says. “My aim is to reveal the deepest parts of myself.”

These photographs reveal a constant questioning and search for the subject’s identity. Notions of freedom and legitimacy are explored in a world of bureaucracy and inequalities. Amouzou captures feelings of exclusion and the stigmatization by the lengthy official process. Those with permanent residency rights can only imagine the insecurity and daily worry of the possibility of being sent back to an unsafe place and the photographs reveal this sense of impermanence. Her ghostly images haunt each frame and hover in the no-man’s land between absence and presence. (from Juxtapoz)