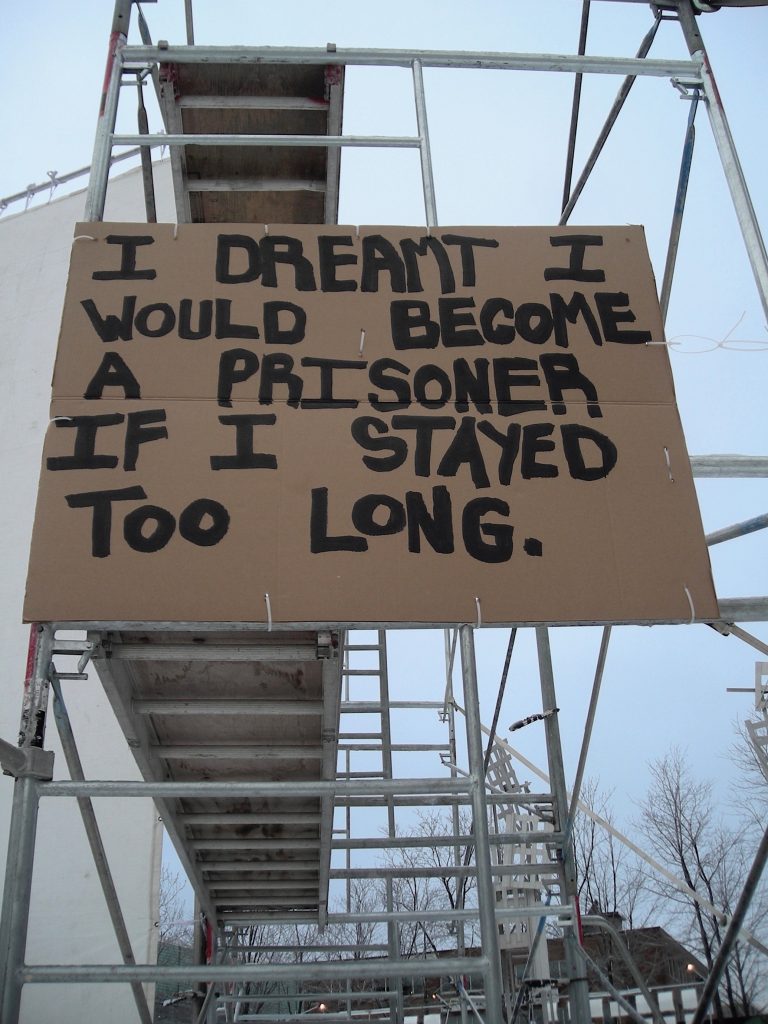 In a dream I saw a way to survive and was filled with joy. (Holzer)

I have dreamed a dream, but now that dream is gone from me. (The Matrix: Reloaded)

There is a poetic brutality to karen spencer’s dream listener porteur de rêves works, and especially several that she’s shared online recently, looking backwards at this series. (The image I’m sharing here is from 2007)

These are stark images, both visually and in terms of what spencer has chosen to present. spencer and I became acquainted when she exhibited a postcard/billboard project (using an image taken from her first invitation with ATSA’s l’État d’urgence) in Saskatoon some time ago; we joked about how both of us liked to walk in the frigid temperatures of our respective cities, and how that gave us a different sense of the place and the people. spencer often seems to notice things that others ignore, in these images: sometimes those are discarded objects. Often they are detritus, or indicators, of discarded people. spencer’s work is very political, and often in the public sphere, as well.

“Her work questions the hierarchy inherent in use values and investigates how we, as transient beings, occupy the world we live in. The widely held belief in a linear movement forward, or “progress”, is confronted through her repetition of actions that lead nowhere. Rambling, dreaming, loitering and riding the metro are all activities spencer has previously undertaken as part of her practice. Actions are sustained over time (often a year or more) rendering her artistic practice indistinguishable from her daily life. She works with what is near at hand, materials that speak of our day-to-day existence: cardboard, oranges, bread, chalk. Through a détournement of materials or intentions spencer intervenes into spaces; hoping to shift, even if only ever so slightly, our perceptions of what is possible.” (from The New Gallery)

spencer’s words are plaintive yet engaging. There’s a sadness evoked that seems to speak to you, on a very personal level. Her other texts in this series are equally melancholic: I dreamed my insides were falling out astride a pile of domestic discards, i dreamt i wanted nothing more to do with death, i dreamt i was waiting but i don’t know what for and i dreamed i lay in a puddle and watched the rain fall on me (the latter two both on wood that we all recognize as that used to board up windows, an arbiter of damaged, empty – unwanted – spaces).

More of the dream listener interventions can be seen here. More contemporary works by spencer can be found on her IG feed: @karenelainespencer