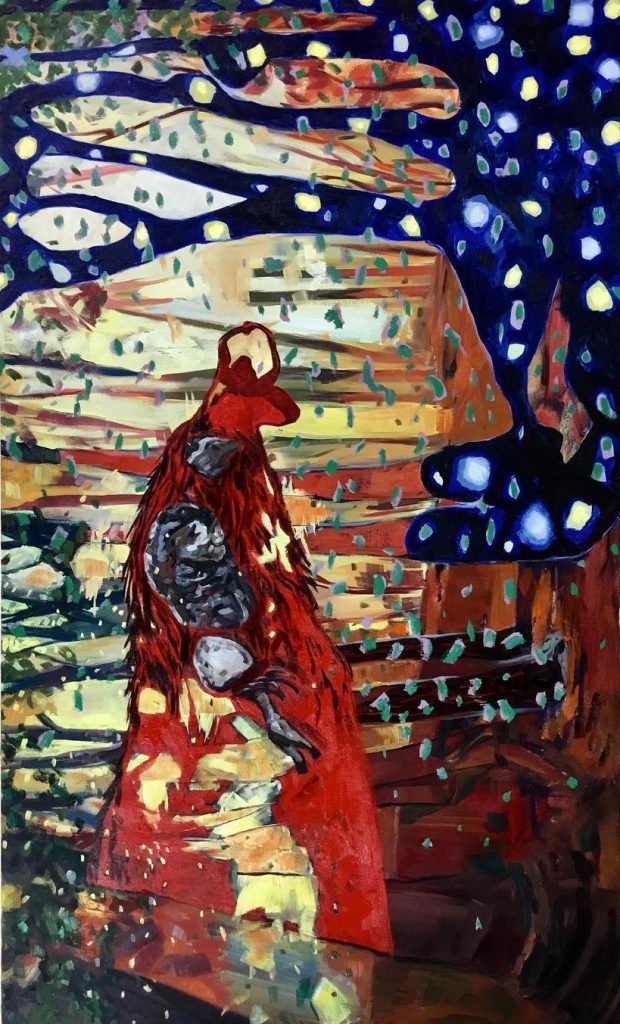 Throooom (a spell to wish away most days) – Scott Sawtell

Scott Sawtell is a painter who straddles abstraction and symbolism, and the manner in which he applies paint means that repeated visits with his work may reveal aspects you missed previously. His works are often significant in size, and this painting is 3 feet by 5 feet, created in 2021 (I mention the size as often Sawtell offers scenes that we might step into, that although tumultuous and frantic, they have a vivacity and vividness that is inviting). One of a number of works currently installed at the Latcham gallery in Stouffville, his paintings offer the contradiction that they are individually seductive, and one can hold your attention, but as a group they create an environment, with pieces having a conversation, whether formally or with some of the narratives Sawtell alludes to, with rough forms or poetic, yet sly, titles.

Recently I’ve been engaging with the work of another painter, Tony Calzetta, and an observation about his work is apt here: there is the possibility of narrative in this painting, but not the necessity of it. It’s also worth considering Julian Bell’s remarks from his book What Is Painting? Representation and Modern Art : ‘In other words there was no prior context to the painting itself. The viewer’s eyes would submit, and the painting would act.’

More of Sawtell’s work can be seen here, at his site, and on his Instagram. ~ Bart Gazzola