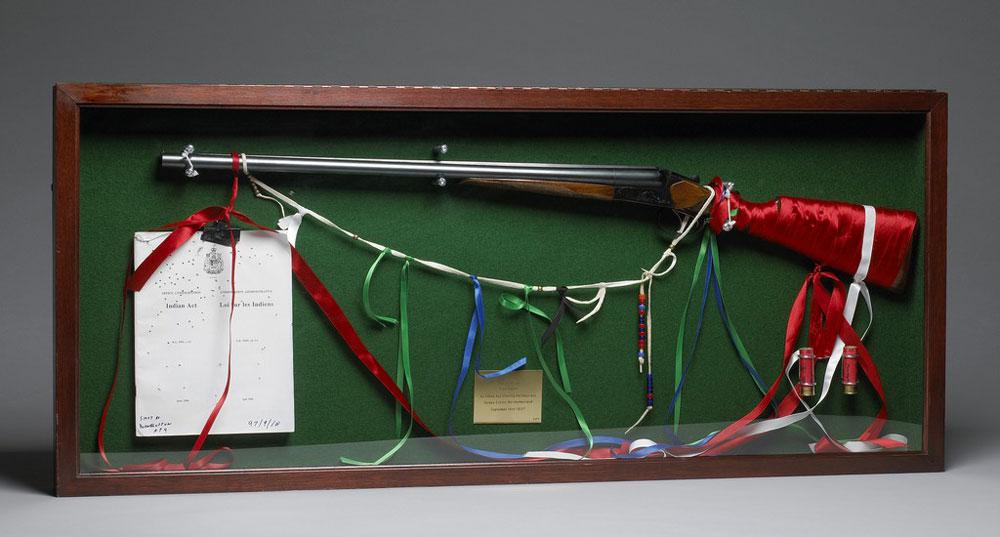 Lawrence Paul Yuxweluptin’s An Indian Act Shooting the Indian Act, Healey Estate, Northumberland, September 14th, 1997 is a provocative object; it’s one of those works of art that is symbolic, and resonates to a larger history. Perhaps that’s because I first experienced it – and Yuxweluptin’s accompanying artist talk – in 1999 when he had a solo exhibition at the now defunct Mendel Art Gallery, in Saskatoon. At the time, Saskatoon was finally dealing with the reality of Starlight Tours (the dumping of Indigenous men on the outskirts of the Siberian city of Saskatoon, by the police, as a standard and apparently condoned practice), and the emergence of the Reform Party (before it ate the old Progressive Conservative party alive, like a malevolent cancer). In his talk, Yuxweluptin referred to the latter as ‘hate’ dressed up in more palatable terms, but still clear to anyone who had been paying attention to the history of Indigenous – Settler relations, and the contemporary discourse of the same.

Now in the National Gallery in Ottawa, they offer the following descriptor: ‘The decorated rifle, empty bullet casings and shredded Indian Act are the remains of a live performance at Healey Estate, Northumberland, United Kingdom. In 1997, on three occasions in two different locations in the UK, Yuxweluptun shot up paper copies of Canada’s Indian Act legislation – one of the oldest and most notorious acts in Canadian history. The Indian Act, passed in 1876, remains in effect today and has made “Canada’s Indians” perhaps the most legislated peoples in North America.’

There’s a quiet rage here, that makes this work ‘worthy’ as art, despite the uncomfortable titters of many I heard then (as the Mendel was a City of Saskatoon institution, often making politicians of various levels uncomfortable with artists uninterested in sanitized, or approved ‘histories’ of the Prairies…but this was not unique to the political sphere, as many visual arts institutions there – the University’s art school, or several artist run centres, as well – were taken aback by the blunt truths of Yuxweluptin’s art, preferring lip service to reconciliation and change). ~ Bart Gazzola