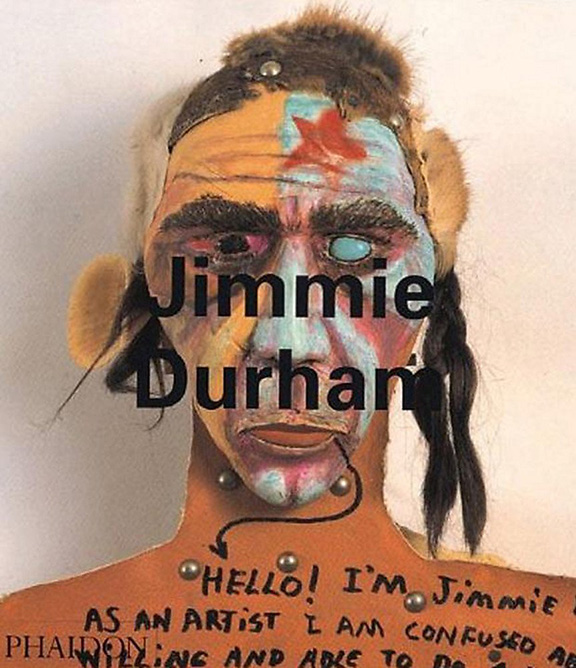 Jimmie Durham (1940 – 2021) passed away last year, and it’s an appropriate time to consider his legacy and his art. This book from Phaidon was originally published nearly two decades ago, and has been reissued recently, with some updates and further considerations about the artist, his work, and the controversy that suffused his practice, especially around his claims of Cherokee descent.

From Library Thing: “Jimmie Durham is an internationally acclaimed artist, writer and poet of [alleged] Cherokee descent. His intricate sculptures and installations mimic the attributes of human beings and animals, and the ways they make or are made into history. Durham collages discarded objects and fragments of organic matter, transforming them with dazzling colour into startling, anthropomorphic configurations. His ersatz ethnographic displays deliver ironic assaults on the colonizing procedures of Western culture. An activist in the American Indian movement during the 1970s, he has also published poetry, fiction and critical theory. Featured at Documenta 9 (1992), his work has also been exhibited at the Whitney Museum of American Art, New York, and the Institute of Contemporary Arts, London. The Survey by British film and art critic Laura Mulvey, author of ‘Visual Pleasure and Narrative Cinema’ and other influential essays, explores themes of history and language, space and time in Durham’s work. Belgian curator Dirk Snauwaert talks with the artist about his multi-faceted practice. In the Focus, Mark Alice Durant, US performance artist and writer, analyzes Durham’s diary of Shakespeare’s Caliban. For Artist’s Choice, Durham has selected texts by Italo Calvino about the loss of speech and the poetry of the invisible. Artist’s Writings include essays, poems and a screenplay published here for the first time.”

Durham is a very contested figure, and his artwork falls within that narrative, too. The exhibition Jimmie Durham: At the Center of the World came to the newly opened Remai Modern in Saskatoon, Saskatchewan, Canada, in 2018 – at the same time that his claims of Cherokee heritage were being hotly contested. As one of the first shows in that gallery, in a place that has often been referred to as the ‘Alabama’ of Canada for its systematic racism, it fired a number of arguments (not the least of which spilled back on some of the critics of Durham, who are associated with the University of Saskatchewan, perhaps as projection from their own issues with institutional racism and attempting to appropriate Indigenous identity to further exploit those communities). At the Center of the World could be seen as the spark that lit that situation, which is still burning….

I cite that to show how Durham’s aesthetic and ideas merit a re examination as they engage with experiences and histories that are being played out in numerous sites around Canada, if not the world, and this book (considering with Durham’s recent passing that readers might contemplate Durham’s life as a whole) allows for his life and legacy to be considered in a more ‘complete’ manner.

I’m familiar with the original edition of the book, but there is an updated edition, from Phaidon, which you can see more about here. ~ Bart Gazzola