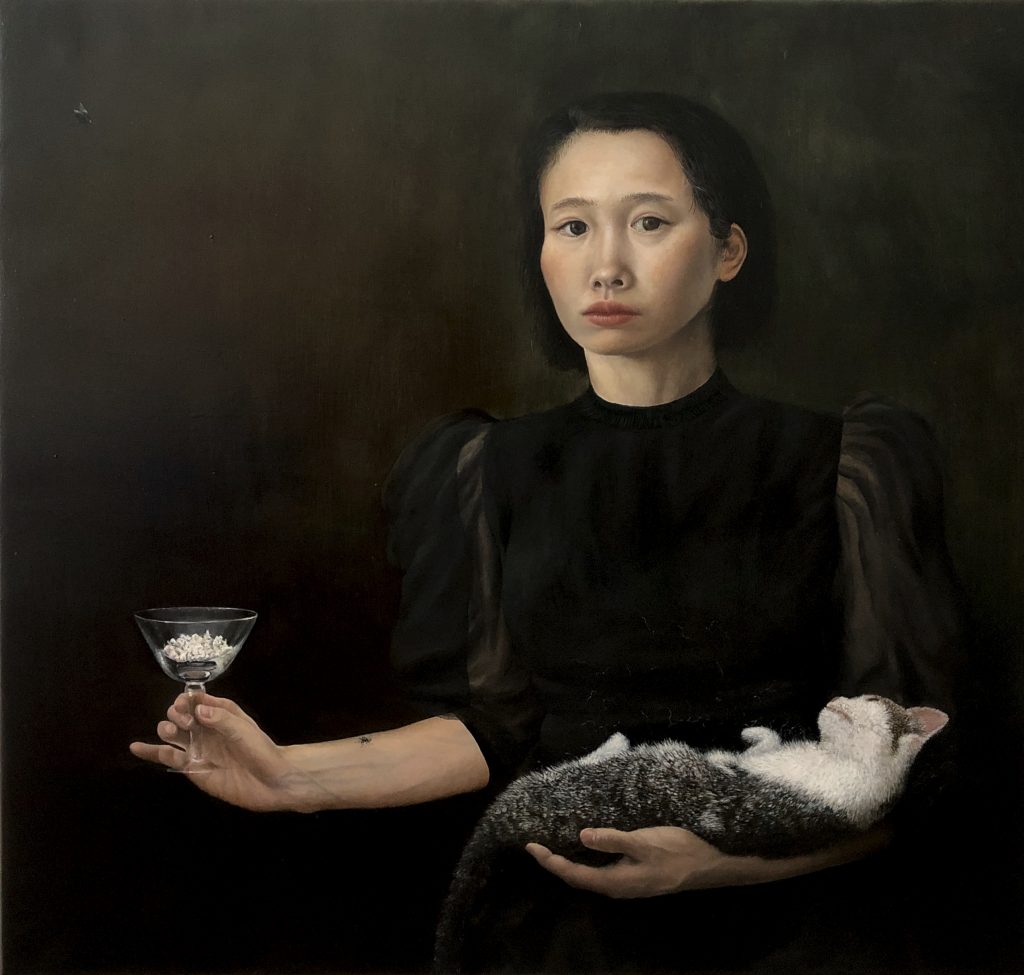 Haruko Maeda | Self – Portrait with my cat and my grandmother in a glass, 2020

Haruko Maeda | Self – Portrait with my cat and my grandmother in a glass, 2020

Several years ago, when I was going through the library of a recently deceased friend  – at the invitation of his daughter – I noticed in his (former) apartment that she had a velvety bag, looking lustrous and fancy. I asked if this was some expensive alcohol, to mark her father’s passing. She told me it was her father’s ashes. When I asked if they’d be scattered in the city we were in, as he’d lived there for some time, contributing to the critical writing community and being a significant voice around visual culture and especially photography, or back in his home province in the Maritimes, she tersely commented she had not decided yet whether they’d be flushed down the toilet or mixed in with the cat litter.

When my own father passed several years ago, not long before COVID, the arrangements around his inurnment were put on hold: his ashes sat on a shelf in the living room of what is now my mother’s house for some time, only recently being put underground this past summer. Frankly, having ‘him’ in the same room where he spent most of the final years of his life seemed to comfort my mother: he was more agreeable than he’d been in decades, ahem.
No, I am not smiling – my face is as stoic and unreadable as Maeda’s, in her painting.

Those are both dark places to begin in considering Haruko Maeda’s painting Self – Portrait with my cat and my grandmother in a glass: but the funerary rites and rituals of family are nothing if not contested narratives that bring feelings to the surface, re opening old wounds and making new ones. Leave the dead to bury the dead, they (Matthew and Luke, to be specific, but that may just be hyperbole) say, but they never truly ‘leave’ us….

Maeda looks unperturbed in this scene: her cat seems relaxed, and even the fly that perches upon her arm that holds the ashes of her grandmother is subtle.

“Japanese Haruko Maeda lives and works in Austria since 2005. In her art she combines the Shintoistic traditions of her homeland with the Roman Catholic faith, deeply rooted in Austrian culture and history. This allows her to position herself between East and West. Maeda lets these double belongings function as a kind of filter through which she can process her own memories and experiences. The purpose is to raise universal questions about existence, life and death.” (from here)

In Neil Gaiman’s Sandman series, the final story arc – The Wake – offers several vignettes as concluding narratives about death, loss and mourning. One of these involves a man cast into exile, after the death of his son, who gets lost in a desert that his guides will not name, as to do so is to invite disaster. Master Li finds a tiny kitten as a companion, a ward, perhaps, against the ghosts of the dead he encounters in the ashy, shifting sands. At some point he encounters the shade of his son, and this is their conversation:

“Father? I am your son. That is only a kitten. Why do you abandon me to chase after it?”
“When you were alive, you were all my joy. Now you are dead. I see you only in my dreams. And when I awake my pillow is wet with tears. The kitten is living, and it needs my help.”

There is a solemnity to Maeda’s work, but also just a touch of irreverence.

More of Haruko Maeda’s work can be seen here.