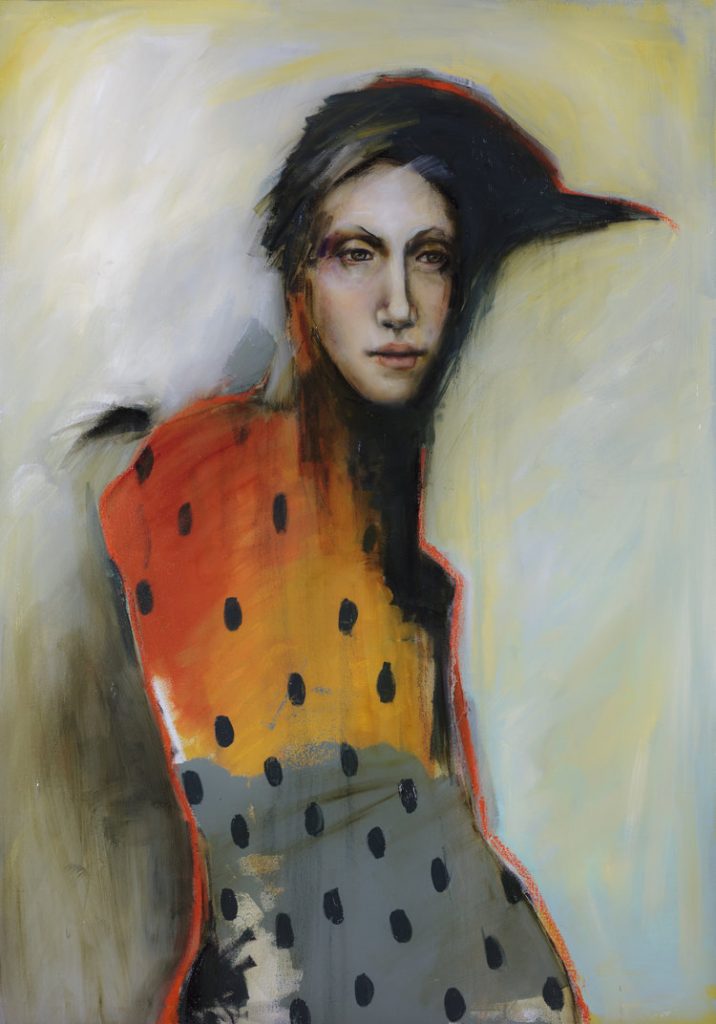 The Morrigan, 2017 by Michele Mikesell

Michele Mikesell’s characters peer back at you. Often, they seem to look through you. This is understandable as her inspiration is so often taken from mythology, with figures like this one (or ones, considering that the Morrigan is sometimes a trio, all sisters, called the three Morrígna) that embody larger ideas that dwarf the individual viewer. The imaginary portrait that Mikesell offers here is titled The Morrigan (but she / they are also called Mórrígan, sometimes named Morrígu, a powerful deity from Irish mythology. In Modern Irish she is Mór-Ríoghain, meaning “great queen” or “phantom queen”). A divinity of war and fate, often a harbinger who foretells doom, death or victory in battle, she’s often been depicted – as alluded to in the shadows here – as a crow (birds which still unsettle us as dark omens, or as scavengers of carrion, perhaps those who fall in battle….perhaps a psychopomp, even, waiting to escort the newly dead to their just reward…).

She looks fittingly unimpressed. (“It is better to fall in with crows than with flatterers; for in the one case you are devoured when dead, in the other case while alive.” – Antisthenes / Ἀντισθένης, c. 445 – c. 365 BC)

There’s a sense of whimsy to many of Mikesell’s anthropomorphic figures, blending animal and human, often titled for old gods like Artemis or Bastet. Another painting is titled Huginn, one of Odin’s ravens – another foreboding bird, knowing and seeing much. She lives in Dallas, Texas and Spain, and “her paintings hone in on the connectedness between human ideas and animal instinct. Irony, contradiction, humor and tragedy are themes throughout her work.”

Many more of her fine paintings (as it was very difficult to select just one) can be enjoyed here. ~ Bart Gazzola