In: Nights of Day 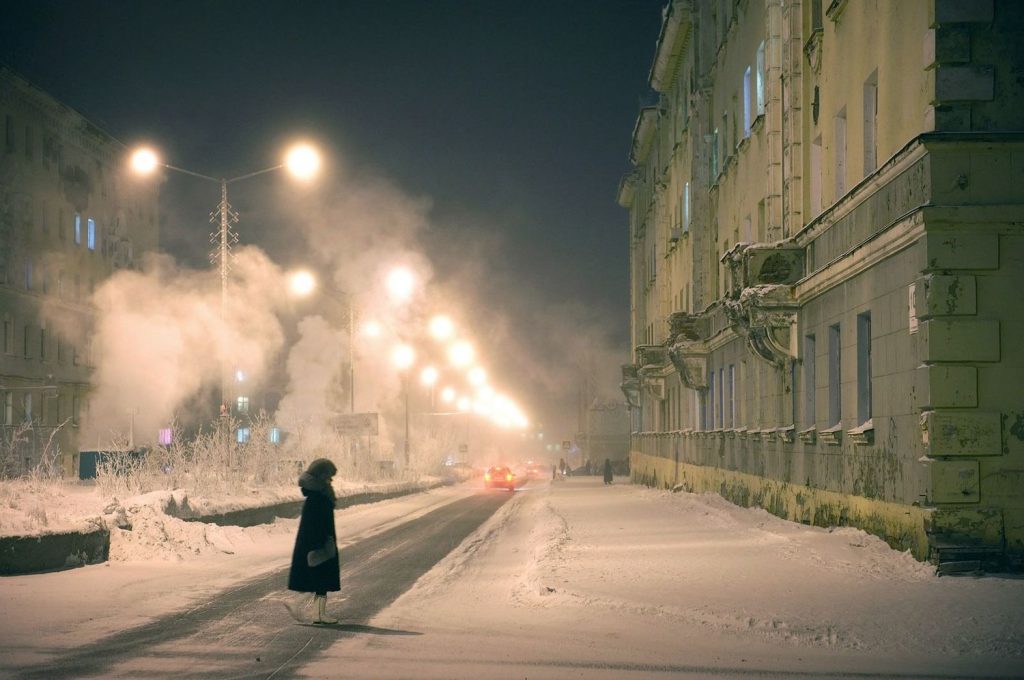 ‘I was with my people then, there, where my people, unfortunately, were.’
(Anna Akhmatova, Requiem, 1935 – 1961, writing of her times in the soviet gulag)

When I lived in Saskatoon, an acquaintance who’d spent time in Eastern Europe once commented that that city in winter was like Siberia, but without the cachet of being that place (which exists as much in our imaginations as it does in reality, one might say – as a ‘great part of the imagination of the world is attached to that site’), nor with architecture that was anything but a failed brutalism (this was during a period with the ‘economic boom’ in Saskatoon where a number of heritage buildings were lost and the banal taupe of others rose like mottled angular tumours….)

Elena Chernyshova’s work is aesthetically stunning: not just for the evocative quality of the images, but also for the scenes they present to us, that seem to blend exotica and danger, a chronicle of sites that remind us of the irrelevance of humanity in the face of nature.
But her notes and comments bring the human element back, as this is not just a ‘pretty’ image, but a site of – of course – contested narratives, that looks back to the history of the USSR and some of the ideas of industrialization and ‘progress’ that have human costs.

Chernyshova’s own words are a powerful adjunct to her lens: “Days of Night / Nights of Day is about the daily life of the inhabitants of Norilsk. Norilsk is a mining city, with a population of more than 170,000. It is the northernmost city (100,000+ people) in the world. The average temperature is -10° C and reaches lows of -55° C in the winter. For two months of the year, the city is plunged into polar night when there are zero hours of sunlight.

The entire city, its mines and its metallurgical factories were constructed by prisoners of the nearby gulag, Norillag, in the 1920s and 30s. 60% of the present population is involved with the city’s industrial processes: mining, smelting, metallurgy and so on. The city sits on the world’s largest deposit of nickel-copper-palladium. Nearly half of the world’s palladium is mined in Norilsk. Accordingly, Norilsk is the 7th most polluted city in the world.

This documentary project aims to investigate human adaptation to extreme climate, environmental disaster and isolation. The living conditions of the people of Norilsk are unique, making them an incomparable subject for such a study.”

Chernyshova offers the following about the image of monumental architecture (with a blue suffusing light): The construction plan of Norilsk was established in 1940, by architects imprisoned in the nearby Gulag. The idea was to create an ideal city. The most “ancient” buildings are constructed in the Stalinist style. The next step of construction happened in the 60s, when the prevailing method in the USSR was to use pre-built panels.

Her other writings also allude to the disputed, if not adversarial, stories that meet and intersect in Days of Night / Nights of Day. The scene with the car and hazy clouds the colour of sulfur has the following notation: In the summer, there is a period when the sun doesn’t go under the horizon. This continues from the end of May till the end of July. It is accompanied by good weather and pleasant temperatures. Around 3 am, while the city sleeps, it is still illuminated by the sun. The city seems like a ghost town, emptied of its inhabitants.

One of the images I’ve included from Chernyshova’s series is unlike the others: and its difference helps to offer insight into the whole. Again, Chernyshova’s voice must be borrowed: Anna Vasilievna Bigus, 88, [who] spent ten years of her youth in the Gulag. At age 19, she was separated from her family and sent into the Arctic Circle. “The only joy we could have in Gulag was singing. We sang a lot. And this gave us the strength to survive…” Her daughter became a music teacher and her grandchildren sing in opera.

The complete series (produced with the support of The Jean-Luc Lagardère Foundation) can be seen here and a feature from LensCulture (where Chernyshova offers some words about many of the images I’ve shared here, that offer more nuance and depth to her vision) can be enjoyed here.