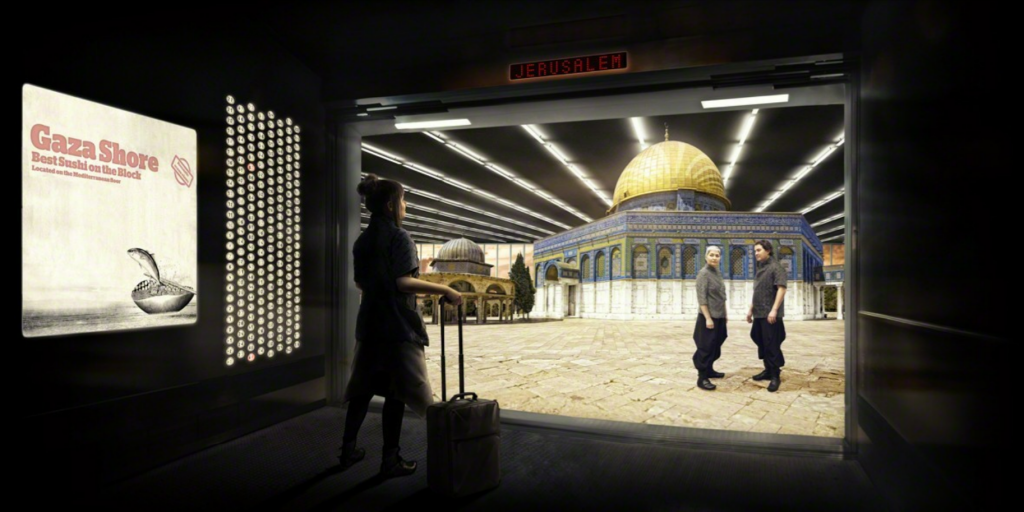 On the flight from London I sit opposite a rumble seat where the stewardess places herself during takeoff. The stewardess is an Asian woman with a faraway look. I ask how often she makes this flight. Once or twice a month. Does she enjoy Israel? Not much. She stays in a hotel in Tel Aviv. She goes to the beach. She flies back. What about Jerusalem? She has not been there. What is in Jerusalem?

The illustrated guidebook shows a medieval map of the world.  The map is round.  The sun has a beard of fire.  All the rivers of the world spew from the mouth of the moon.  At the center of the world is Jerusalem. (Robert Rodriguez, The God of the Desert, Harper’s Magazine)

One can’t help but be thinking of the displaced, of refugees fleeing strife, with the situation in Eastern Europe right now; and let’s be frank – not all refugees are ‘equal’ with race and geopolitics rearing their ugly heads, as we see in both the history and present of Canada, and the wider world. I’m not often a fan of Ai Weiwei, but his work about Alan Kurdi touched a nerve that many of us may not have known – or my still deny – was exposed.

In light of that unpleasant reality, the works of Larissa Sansour, a Palestinian born artist were on my mind this week, especially her series Nation Estate. Jerusalem is not a neutral place, or an unloaded term. It may be the best example in ‘Western’ nation states – though in the Middle East – of a place that is intensely contested, an apex of Salman Rushdie’s notion of an ‘imaginary homeland.’

Even that tepid taupe of Wikipedia offers this: Given the city’s central position in both Israeli nationalism and Palestinian nationalism, the selectivity required to summarize more than 6,000 years of inhabited history is often influenced by ideological bias or background (please see Historiography and nationalism).

“In her Nation Estate (2012) series, Sansour conceptualizes an immense high-rise as a new home for her people. In each digitally manipulated photograph in this series, she places herself on a different floor of the edifice. We see her travel from the main lobby, to the Dead Sea, to Gaza, all in the space of a single building.”

“….Nation Estate takes place…in a mammoth high-rise that houses the entirety of the Palestinian people in one easy-to-navigate complex. Blurring the lines between utopian and dystopian realities, she paints a seemingly peaceful, albeit unfathomably sterile future where walls cease to function as barriers to human interaction.

“In a way there’s something positive about ‘Nation Estate.’ There are no check points and people can visit one city from another just by the use of the elevators. It’s an easy life that questions progress in general. Certain things are becoming easier, yet this skyscraper environment is completely inorganic,” Sansour stated. “It’s actually really a mockery when you think about it — living in a skyscraper. So it’s completely dystopian in the end.” (from here)

Who is a ‘real’ refugee? Who has a ‘right’ to live in a space, and to claim that they ‘own’ the land? Sansour’s works have often addressed this; we live in a world where to be Palestinian is often dismissed as illegitimate, if even ‘legal’, whatever that might even mean. Perhaps, as alluded to in Sansour’s work, the idea of ownership and wealth not only preclude but define / deform what it means to be a citizen, or even to be human.

In looking at this work, I also cannot help but consider the lament of Psalm 137: For how are we to sing the Lord’s song in a strange land?

You can see more of her work at her site, and her Instagram is @larissasansour.