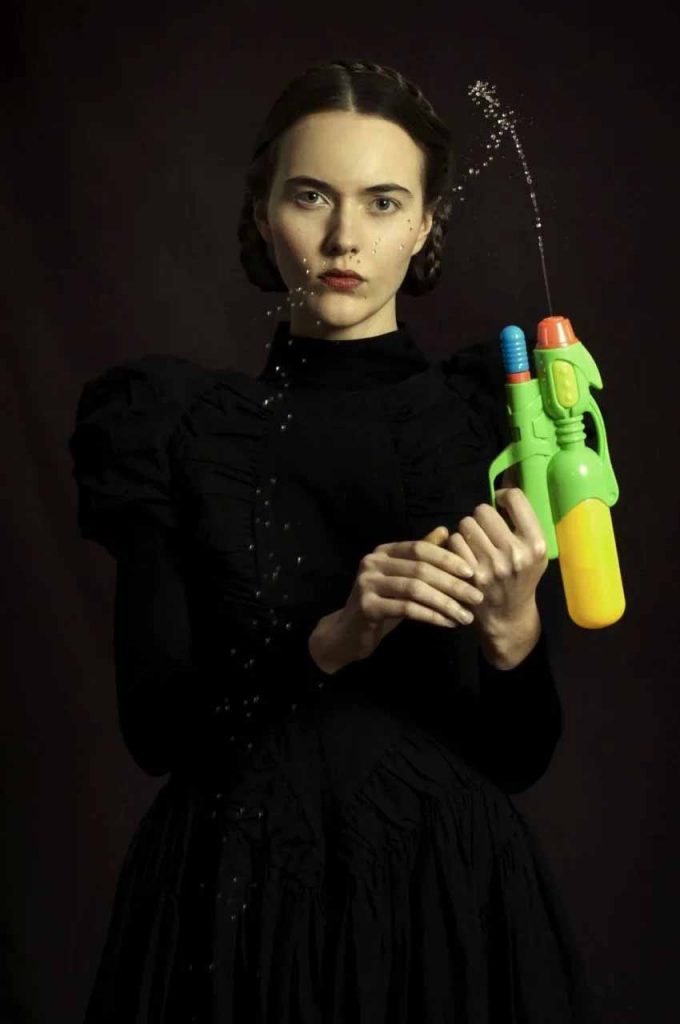 Most of the writing around Ressia’s photographs talks about absurdity and anachronism: perhaps that’s because she appropriates form and redefines meaning in a manner that challenges art historical tropes around gender and relevance. Meticulously executed, her ‘portraits’ have a gravitas on the one hand, but then this is broken by elements that can’t help but amuse (though her people never crack a smile, with eye contact that might wilt any irreverence from the viewer).

There is a hint of dourness to the woman who is the player in this series, and many others, having a heavy handed seriousness that is then fractured by the various objects her subjects are brandishing that seem silly and puerile.

Bluntly, Messia’s Woman with a Water Pistol looks like she’s had just about enough of you, young man, and unless you want to be sprayed with water – disciplined like an unruly, disobedient cat – you’d best behave. You shan’t be told again.

A bit flippant perhaps. But consider the [still, uninterrupted] proliferated misogyny in Western art history [or contemporary art] of women as object, or demure commodity, or the validation / apologia of rape as seen with Europa or the Sabine women or ‘Susannah and the Elders’ (and so, so many others). Consider that in (recently done) 2022 we’ve seen groups of women around the world make it clear that they have had *quite* enough and my interpretation is not without consideration….

This image is part of a larger series titled How would have been Childhood? with the same figure in them all, her unimpressed body language acting as a unifying aspect of the artworks. Birthday hats, costumes, balloons – nothing seems to inspire joy, here. When I first encountered this series online, a birthday party that no one was enjoying – if anyone even came, besides the ‘star’ of the series – can be forgiven for being an initial impression….

“Romina’s art cleverly initiates dialogue on important contemporary social issues through the striking use of anachronistic tropes juxtaposed with mundane and banal elements of modernity. Indeed, the influence of classical artists like Da Vinci, Rembrandt and Velazquez is instantly recognizable in the palettes, textures, ambiance and scenes captured in Romina Ressia’s works, bequeathing them an air of familiarity which only serves to highlight the contradictory and sometimes confrontational presence of objects of modernity such as cotton candy, bubble gum, microwave popcorn and Coca Cola.

The theatrical absurdity in her pictorial compositions, which combine stylistic elements of Renaissance paintings and Pop art, and the dissonance of the stark contradictions captured therein have a surprising clarity, making for an honest critique through visual dialogue of received notions of modernity. In this sense, Romina succeeds in achieving her artistic intent which is not to recreate or refer to the past but to establish a frame within which to interrogate the perceived evolution and progress of society especially in respect to the role and identity of women.” (from here)

If you’re doltish enough to suggest ‘she’d look better if she smiled’, don’t be surprised if you get soaked – deservingly.

More of Romina Ressia’s evocative – if a bit disquieting – work can be seen here.
Her Instagram is @rominaressia