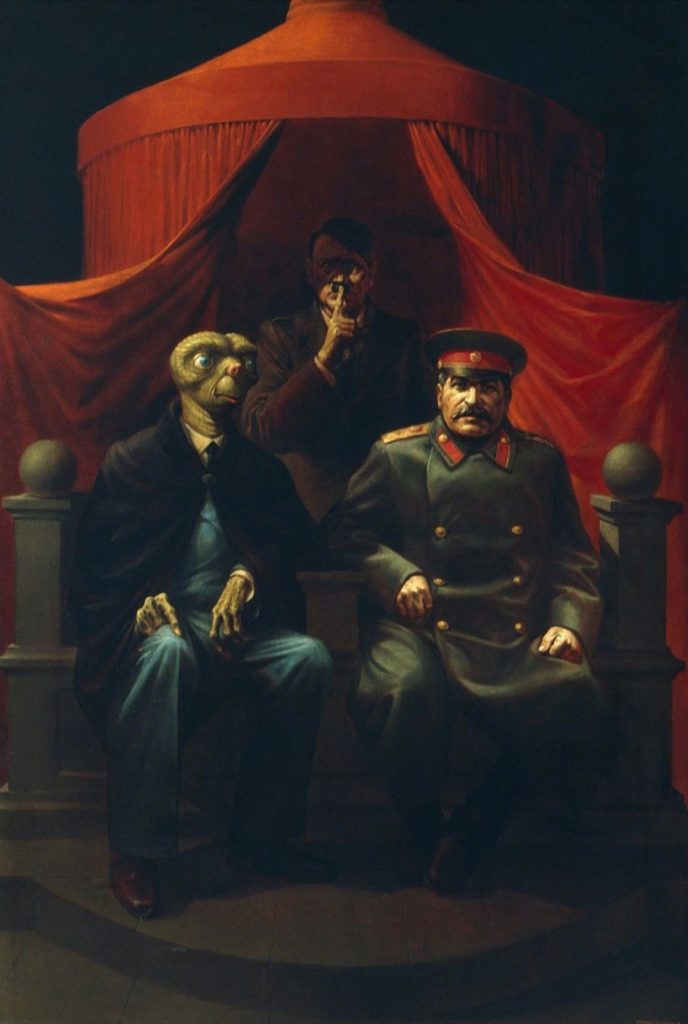 I enjoy speculative fiction and recently was reading Harry Turtledove’s Joe Steele. It’s a stand alone story, but you may be familiar with his Southern Victory series (in which the Confederate States survive the American Civil War, and it stretches into the mid twentieth century, offering alternate – yet familiar – takes on everything from WW I to the Holocaust) or World War / Colonization books. That series of books inject an alien invasion into the midst of WW II. This might sound ludicrous, until you read them and one of the aliens observes that – upon their discovery of Buchenwald and Auschwitz – that clearly humans are monstrously incapable of governing ‘ourselves.’ It’s an interesting tonic to the proliferation of science fiction that posits an alien deus ex machina that proffers the narrative that humans are special – such as Arthur C. Clarke’s Childhood’s End, for example. Perhaps it’s because Clarke was more hopeful, and much has happened since then…

“The novel [Joe Steele] explores what might have happened had Joseph Stalin been raised in the United States, postulating his parents having emigrated a few months before his birth, instead of remaining in the Russian Empire. It depicts Stalin (in this history, taking the name Joe Steele) growing up to be an American politician, rising to the presidency and retaining it by ruthless methods through the Great Depression, World War II, and the early Cold War. The president is depicted as having the soul of a tyrant, with Stalin’s real-world career mirrored by actions taken by Steele.” (from here)

But I mention Turtledove’s Joe Steele as it reminded me of Komar and Melamid’s painting Yalta Conference, from the Nostalgic Socialist Realism series, 1982. This work has also been the cover image for Boris Groys’ seminal book The Total Art of Stalinism: Avant-Garde, Aesthetic Dictatorship, and Beyond (2011). The ‘inspiration’ for this painting is a famous photograph.

Komar & Melamid are interesting for their cultivated personas as much as their art. This painting can’t help but offer and foment a myriad of interpretations, drawing upon not just the ‘players’ but the moment it re imagines. Yalta was, after all, the point at which the shaky alliance between the USSR and the United States began to seriously fracture. The employment – or appropriation – of ‘socialist realism’ (a style that was the official style of the USSR but that – to quote a Soviet born historian – was like Pravda, in that you can find some grain of truth by what it ignores) only makes this a ‘scene’ even more about failure (like the Yalta Conference was, towards any peace in a Post WW II world) than progress, with a sprinkling of absurdity and skepticism, with the hushing Hitler and American leader a goggle eyed alien….

Boris Groys, in writing about Komar and Melamid, offered the following about their aesthetic: “[The artists] themselves, however, perceive no sacrilege whatever here, because they consider the religion of the avant-garde to be false and idolatrous.”

More from Groys, that could also apply to this painting, and the multiplicities of potential interpretations of it (combined with the irreverence of Komar and Melamid’s larger practice): “[in] the West, the march of progress is “aimless” – one fashion succeeds another, one technical innovation replaces another and so on. The consciousness that desires a goal, meaning, harmony, or that simply refuses to serve the indifferent Moloch of time is inspired to rebel against this progress. Yet the movement of time has resisted all rebellions and attempts to confer meaning upon, control, or transcend it.”

More of Komar & Melamid’s work – and their unique aesthetic and legacy – can be enjoyed here. If you’re interested, more about Boris Groys’ writings and ideas can be read here. 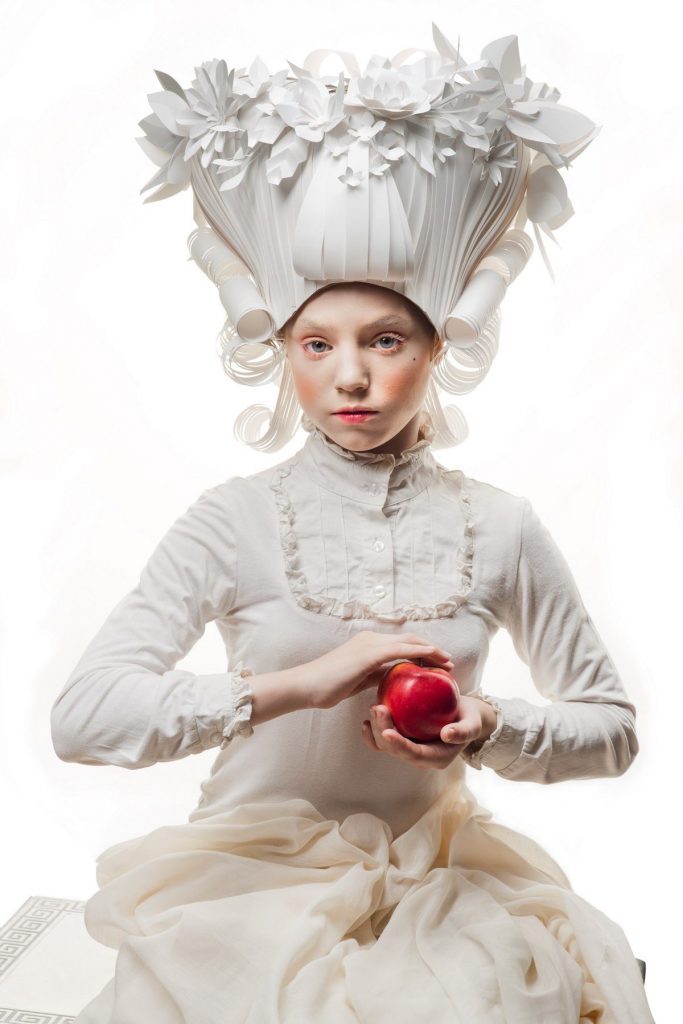 Historical wigs always fascinated me, especially the Baroque era. This is art for art’s sake aesthetics for aesthetics, no practical sense. But they are beautiful. I made a series of wigs. Paper helps to highlight in this case the main form and not be obsessed [with] unnecessary details.

There is something both decadent and timeless about Kozina’s work. The idea of a peformative lens comes into play – as these intricate, hand made (with no digital tools) ‘wigs’ only attain their ultimate beauty when worn by one of Kozina’s models, and the rest of the team comes together (meshing together, perhaps, like the paper in the artist’s constructions) to produce a moment that has as much to do with art historical tropes, as seen in the paintings of  Jacques Louis David or Caravaggio, as it does with contemporary couture and fashion. The artifice of the apple, the pale face perfectly dotted with subtle spots of rouge, the winsome look eschewing eye contact in one scene and the feigned precociousness of the model looking directly at us in another all suggest this might be a Jean-Honoré Fragonard (more late Baroque, with a touch of the playfulness of Rococo) except for the stark palette, only broken by the red of the apple.

I think of Fragonard as the old Russian Imperial court often looked to France for its ideal, and there’s a sentiment of the elaborate, exotic Ancien Régime to Kozina’s many works: another act of imitation from an artifice of pretension that was, of course, all about social class and cultural capital.

More of her work can be seen on IG at @asya_kozina or at her site.

The photographer for this work is Anastasia Andreeva, with assistance from Dina Kharitonova. The makeup artists are Marina Sysolyatina and Svetlana Dedushkina. 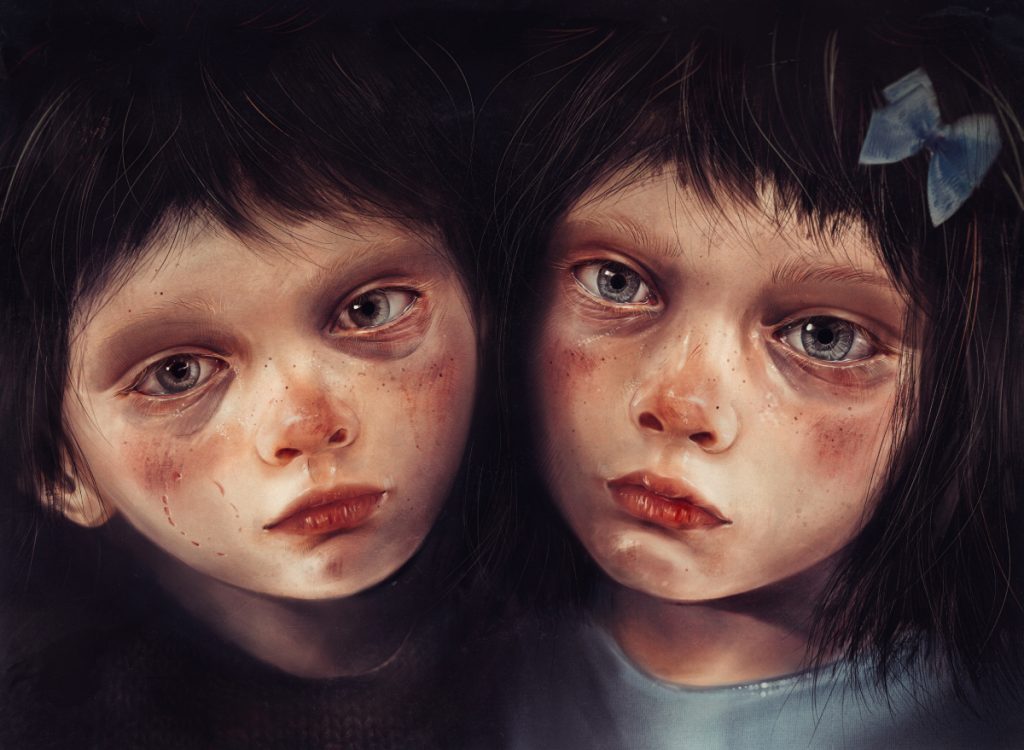 One of Olga Volgina’s more recent works that she’s shared on social media (as she’s a prolific artist) is a work that resonates in both an immediate and historical manner. Any (well made and meaningful) rendering of children has this power. Volgina’s children evoke a multiplicity of intersecting references: Goya’s portrait of Manuel Osorio Manrique de Zúñiga, who looks doll – like and innocent until a closer examination reveals several cats waiting to devour his pet bird, to the child’s indifference, is one. Delving even deeper into the worn faces and unflinching gaze of the children, I’m also reminded of Robertson Davies’ book World of Wonders. In response to one character relating his harsh yet essential childhood experiences, another defers that though he has experience “exploring evil” through his films, the evil of children is something that requires courage he lacks….

Volgina’s children must also bring to mind Ignorance and Want, from Dickens’ A Christmas Carol, and in that instance offer a more disturbing consideration of how a child is perhaps a larger reflection (or repository) for the world in which they live. Volgina commented that when this work – titled The Mark – was finished, “now I look at them and they look at me”, but what they see, or what they think, is opaque to us. We can guess; but the children in The Mark are silent and staring, offering no answers. Perhaps they’re indifferent to us, perhaps demanding, or perhaps simply exhausted and bruised.

Volgina lives and works in St. Petersburg, Russia. Her digital portraits, as she describes them, are both a bit unsettling and insightful. This brings to mind how sitting for some artists requires a degree of courage (never mind being nude but what of the deeper self that the artist might excavate and present for the world to see?).

See more of Olga Volgina’s work on Instagram, FB and at Etsy, where she and her twin sister, Liza Volgina, have a variety of engaging works on display. ~ Bart Gazzola