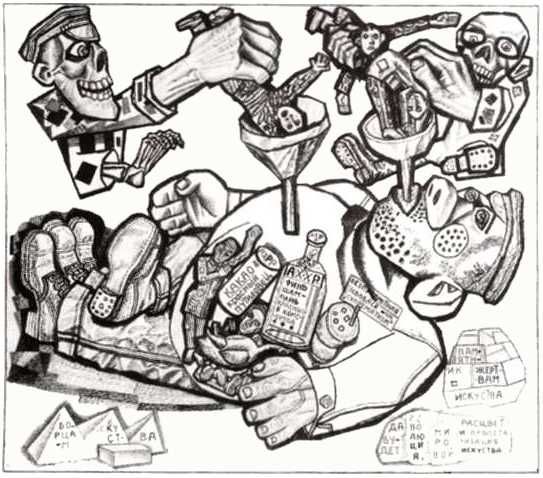 Pavel Filonov | The Formula of Contemporary Pedagogy of IZO, 1923

Pavel Filonov | The Formula of Contemporary Pedagogy of IZO, 1923

He was walking about with a noose round his neck and didn’t know. So I told him what I’d heard about his poems.

Yevgraf: This is a new edition of the Lara poems.
Engineer: Yes, I know. We admire your brother very much.
Yevgraf: Yes, everybody seems to.. now.
Engineer: Well, we couldn’t admire him when we weren’t allowed to read him…
Yevgraf: …No.

(both quotes from Boris Pasternak’s tale of Russia before and after the Russian Revolution Dr. Zhivago)

A defining book in my reading and understanding of art history in the 20th century is Boris Groys’ The Total Art of Stalinism: begun when the USSR was still in existence, Groys was able, with the fall of that empire, to access more information, and offer a more nuanced take upon the years post Russian Revolution, as it pertains to the arts in that rare and unique historical moment. Amusingly, I became aware of it after participating in a panel about modernism, and horrifying my fellow speakers by stating that it had failed, horribly, but that its relevance was in its ideals…

Several points stay with me, in considering Pavel Filonov’s work. One is that, in a correlation to the backward economic state of Russia making it fertile ground for a radical new approach and the subsequent revolution, the artistic milieu also suffered from this. It’s not incidental that so many significant artists – not just to Russia but to ‘western’ art history – like Malevich or the Suprematists flourished during the first heady days of the NEP. Experimentation and a sentiment that ‘anything was possible’ was pervasive and defining, with a desire to irrevocably fracture from the ‘old.’

This, of course, all ended badly, and the promised freedoms – whether artistic or personal – were soon not just reigned in, but suppressed, and a cultural exodus from the USSR to other places was predictable.

Filonov (1883 – 1941) served in WWI and would die of starvation during the siege of Leningrad, the once and present St. Petersburg, in the war that followed the ‘war to end all wars.’

The painter, art theorist and poet was an outsider, even during the pre and immediately post revolutionary days of promise: after several failures, in “1908 Filonov was admitted at last to the Academy of Arts. His works attracted the attention of both students and professors by their unusualness: they were not abstract and depicted their subject with full likeness, but were executed in garish, bright colors – reds, blues, greens and oranges. This manner did not conform to the Academy standards, and Filonov was dismissed “for influencing students with the lewdness of his work”. Filonov protested the decision of the rector Beklemishev, and was rehabilitated, but after studying for two years he left the Academy in 1910.”

He was one of many whose works were deemed degenerate, as they eschewed official socialist realist policy. He’d be lost to us, in terms of history, but for the efforts of his sister Yevdokiya Nikolayevna Glebova: “She stored the paintings in the Russian Museum’s archives and eventually donated them as a gift. Exhibitions of Filonov’s work were forbidden. In 1967, an exhibition of Filonov’s works in Novosibirsk was permitted. In 1988, his work was allowed in the Russian Museum. In 1989 and 1990, the first international exhibition of Filonov’s work was held in Paris.

During the period of half-legal status of Filonov’s works it was seemingly easy to steal them; however, there was a legend that Filonov’s ghost protected his art and anybody trying to steal his paintings or to smuggle them abroad would soon die, become paralyzed, or have a similar misfortune.”

It’s unsurprising that Filonov was deeply influence by fellow dissident Klebnikov: and his works – whether the obvious disdain present in this piece The Formula of Contemporary Pedagogy of IZO, or the more stark Those Who Have Nothing To Lose, or Animals, that would make a fine illustration for Orwell’s Animal Farm decades later – have an unflinching quality.

More of Filinov’s life and legacy can be learned here (and was the source cited for the biographical quotes about his life and work).