In: The Death of the Artist: How Creators Are Struggling to Survive in the Age of Billionaires and Big Tech 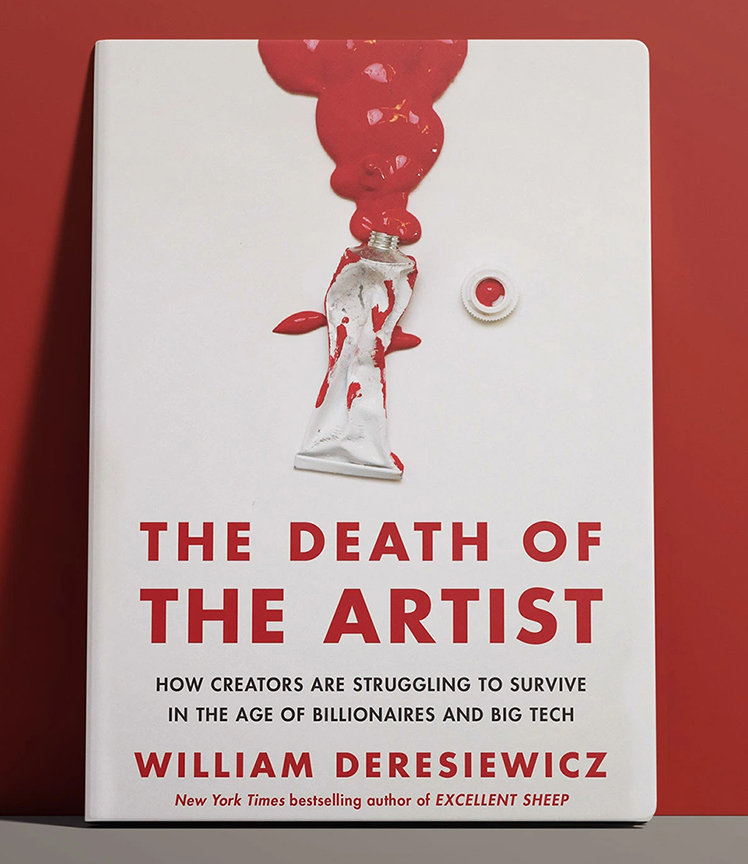 The Death of the Artist | William Deresiewicz, 2020

The Death of the Artist: How Creators Are Struggling to Survive in the Age of Billionaires and Big Tech | William Deresiewicz, 2020

I cannot think of another field in which people feel guilty about being paid for their work—and even guiltier for wanting to be.

This is – bluntly – a difficult book. It was necessary for me to read it in installments, and I know that many of my friends who are artists had to do the same. Perhaps it was like a series of inoculations against a disease, spaced out to have maximum curative effect. It motivated me to revisit Robert Hughes’ essay Art and Money, from his book Nothing If Not Critical, and simultaneously I was reading Blockchain and the Law: The Rule of Code by Primavera De Filippi and Aaron Wright (as part of my ongoing attempt to understand the phenomenon of NFTs better). Three decades separate those two books, and they make an interesting extended bibliography to The Death of the Artist. Sometimes there’s concurrences, more often disagreement, and a feeling that more time must have passed between their publication, as the gulf is so wide that Doris Lessing’s idea that ‘nothing seems more improbable than what people believed when this belief has gone with the wind’ floated in the air, as I read.

For anyone who’s worked in culture, or has attended art school or various other educational institutions focused upon producing ‘creators’, there are numerous assertions made in William Deresiewicz’ book that will ring true, in a rueful manner that many of us may have denied (or sadly, will continue to do so, unto the pauper’s grave). Some of the stories from the artists – of various stripes – that Deresiewicz spoke with, that inform this book, will be very familiar. My own experience in public galleries or artist run centres, and attempting to negotiate being a cultural worker in other spheres, match the stories here.

This book might offend you, but it will offend you in all the correct ways, and perhaps offend all the appropriate people.

If art is work, then artists are workers. No one likes to hear this. Nonartists don’t, because it shatters their romantic ideas about the creative life. Artists don’t either, as people who have tried to organize them as workers have told me. They also buy into the myths; they also want to think they’re special. To be a worker is to be like everybody else. Yet to accept that art is work—in the specific sense that it deserves remuneration—can be a crucial act of self-empowerment, as well as self-definition.

A tangent, not unrelated, if I may, that aligns with Deresiewicz’ research: a friend is an artist, exhibiting widely, and has been teaching as a sessional for several years. She is me, twenty years ago: she has less protection, security and opportunity than I did, despite both of us doing ‘all the right things.’ We are – like many workers – in a steady decline, that seems not only unstoppable, but unrecognized. Another gem from Deresiewicz’ book: The writer and visual artist Molly Crabapple, another exemplary leftist, puts it like this in her essay “Filthy Lucre”: “Not talking about money is a tool of class war.”

Art is hard. It never just comes to you. The idea of effortless inspiration is another romantic myth. For amateurs, making art may be a form of recreation, but no one, amateur or professional, who has tried to do it with any degree of seriousness is under the illusion that it’s easy. “A writer,” said Thomas Mann, “is someone for whom writing is more difficult than it is for other people.” More difficult, because there is more for you to do, more that you know how to do, and because you hold yourself to higher standards.

If I ever dared to revisit academic or educational spaces – or if I was let back in – this text would be required reading, not just for those wanting to become artists, but especially for those who would go on to be gallerists, cultural workers and even players within the political sphere, as in some ways this book is a warning. But there’s a large dollop of Cassandra in cultural spaces, especially in Canada (several years ago, I was pilloried for shaming an artist run centre for not paying emerging artists, but the abuse was worth it as they – eventually – did the right thing). Deresiewicz’ research, and the testimonials in this book, can help break that complacency….

The Death of the Artist: How Creators Are Struggling to Survive in the Age of Billionaires and Big Tech is not so much a warning, as a reality. It is a severe, but indispensable, book.

All quotes in italics are from Deresiewicz’ book. As usual, I suggest visiting a local bookstore (such as Someday Books) to pick up this text.