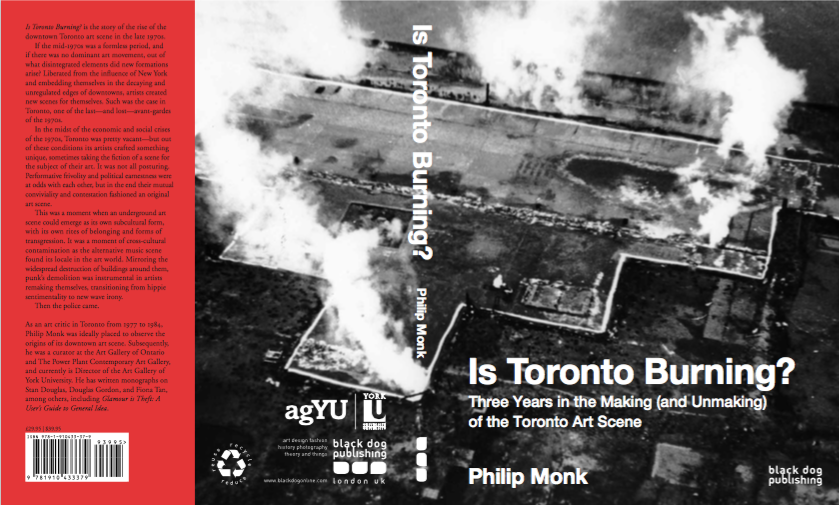 Philip Monk | Is Toronto Burning?: Three Years in the Making (and Unmaking) of the Toronto Art Community

“Each day I write. I’m not sure what it’s all about, but most days I write about art and the constant raping of its values by pseudo intellectual acrobats.” (Jack Pollock, Dear M: Letters from a Gentleman of Excess)

Nothing seems more improbable than what people believed when this belief has gone with the wind.  (Doris Lessing, The Golden Notebook)

“Culture has replaced brutality as a means of maintaining the status quo.” (Philip Monk, Is Toronto Burning? Three Years in the Making (and Unmaking) of the Toronto Art Scene)

A spate of old issues of FILE magazine came into my hands over the past year (it’s worth noting that they were a gift from Elizabeth Chitty, who also gave me the copy of Monk’s book that spurred this essay). They’re a bit ragged, but that seems appropriate, as they’re like flashbacks (the magazine began publishing in 1972 and ran for 17 years, with 26 issues) that don’t resonate with many, more nostalgia than substance.

They seem very dated, at times very juvenile, and more of an exercise in artistic onanism than anything else. This is, of course, a generalization, and it’s broken in certain points quite clearly. The issue that is almost entirely colour images of the three poodles, one of the many symbolic personas of General Idea, engaged in various tumbling and enthusiastic sex acts is one to keep (as I was impressed when I saw one of the large paintings from this series on a trip to the Art Gallery of Hamilton, installed amidst other notable Canadian works from Graham Coughtry to Attila Lukacs).

But many of the other copies of FILE are easily dismissed, even by someone like myself who has made a career of excavating in spaces that are too often ignored as pertains to Canadian Art history. The odd flash of brilliance, or the appropriation of mainstream media narratives and iconography, the sampling of authors from Burroughs to Acker, are the exception, not the rule.

Perhaps, this many decades later, our expectations of how artists engage in appropriation is more sophisticated – or more jaded. Edit as you will.

But all this reminded me of my long overdue response to Philip Monk’s book Is Toronto Burning? Three Years in the Making (and Unmaking) of the Toronto Art Scene), published several years ago, and that is focused upon the same era. I found the book uneven, and some players and characters in this story seem somewhat incongruous to their later roles or personas (true or assigned, in that vague way of art history and cultural narratives). But Monk’s own words lead to this: “In a sense, what follows is a story, a story with a cast of characters. These characters are pictured in video, photography, and print – not necessarily as portraits but rather as performers.” (from the chapter 1977). But in finally offering my impression of Monk’s narrative (considering personal and public factors and all the sites where those contested narratives collude and collide), I’ll begin with the following assertion: “All narrators are unreliable. Especially when they are characters within their own story.”