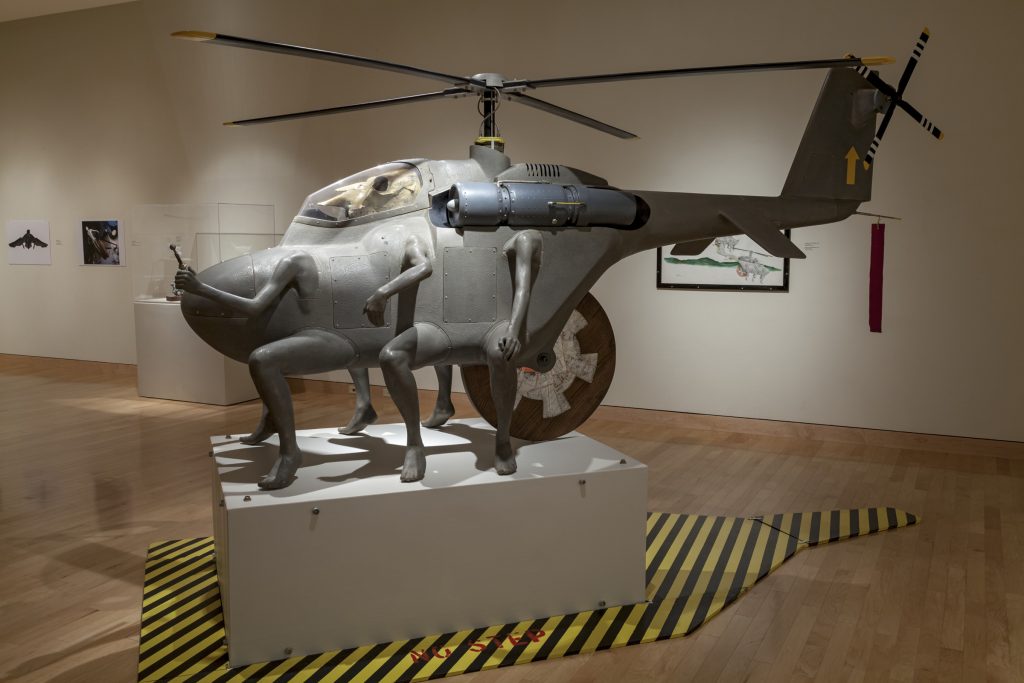 Don Bonham (1940 – 2014) was a sculptor who produced monumental works that intersect with classical ideas about art and also incorporated contemporary references – especially as pertains to industry and technology. His work alternates between humour and a disturbing – yet attractive – aesthetic that reflects back on a larger society, especially in terms of how often any new technological advance is met with the brutal inquiry of whether “Can this make killing less of a hassle?” (Sadly, the second blunt question is, “Can I have sex with it?”). If you think I’m wrong, consider other works by Bonham that would please J.G. Ballard as three dimensional iterations of some of Phoebe Gloeckner‘s illustrations to his texts…or horrify him, edit as you will.

Don’t criticize Bonham’s presumed priapism and the implicit male gaze in his work: an era gets the artwork it merits. His industrial works often openly acknowledged and built upon the fetishization of object that was a continuation of a fetishization of the female body. His works are always seductive and well executed, if initially unsettling.

In his own words: “The gap between human and machine is constantly shrinking. Are we to become more like machines, or machines more like us? The creators of technology have imbued machines with human characteristics, and this tendency is creating a more hospitable environment for their acceptance by society. As an artist I am only enlarging upon this concept.”

Years ago, a fine film critic spoke of how futurism, in cinema, was either a clean, antiseptic space, like an Apple store, or more like Blade Runner, and broken, dirty and more part of an industrial gothic aesthetic. Bonham falls within the latter.

I have been accused of being somewhat ‘subjective’ as a reviewer, often relying upon ‘inappropriate’ sources and considerations when engaging with artwork. This bemuses me, and entertains me even more when I consider that a motivation for featuring a work by Bonham is the rather disrespectful – though typical of the vagaries of institutions that claim to protect and nurture culture – decision by McIntosh Gallery, at the University of Western, to de accession one of his works from their collection. Curator, writer and gallerist Terry Graff has been working against that, and you can see his efforts – and learn more about Bonham and his legacy – at Graff’s social media.

But in looking at Bonham’s sculpture here (and many of his similar works that meld, merge and mash up humanity and machine, with a sense of militarism that is almost inappropriately amusing and intersects with black humour) a Vietnam era anti – war anthem from the 1960s comes to mind. This is fitting, as Bonham came to Canada during the period when many men from the United States were fleeing their country, opposed to the war there. However, “Bonham enlisted in the U.S. Marine Corps and served in an elite Recon unit in Southeast Asia. After six and a half years, he was honorably discharged to enter the University of Oklahoma as an Art History Major. He left university before graduating and worked in Detroit on a Ford assembly line before moving, in 1968, to London, Ontario, where he discovered a dynamic arts community that reinforced his decision to pursue a career as a visual artist.” (from a retrospective of Bonham’s artwork at The Beaverbrook Art Gallery)

The song Sky Pilot by The Animals is as confrontational as Bonham’s Twentieth Century Technology Utilized by Third World Mentality, and for its time was surely controversial: and it’s necessary to include the print below that Bonham produced, of his modified – or realized – helicopters swooping down, mimicking that infamous scene where the ‘righteous’ decimate a village from Francis Ford Coppola’s Apocalypse Now. Death rides a pale horse, a mechanized cyborg that’s surely a descendant of  Albert Pinkham Ryder’s The Race Track (Death on a Pale Horse), coming down from the sky….

Regionalism has both defined – and deformed – Canadian art and Canadian art history (and is arguably why Bonham’s work is being so disrespected by the University of Western. Graff is more erudite and informed on this front than I). But regionalism is also the lens through which I respond to the terms of ‘First World’ or ‘Third World’ (cited in the title of this work) which seem as archaic at times as ‘Cold War’ (an epoch I had to explain to students, when I used to teach at a university, and let’s remember that the ‘Second World’ was the Communist Bloc, and the most avowed communist country now is definitely ‘open for business’…).

Bluntly, there are those who have and those who have not, and the tools at hand are used to enhance the former and demean the latter: it is the ‘order of things’, in the era of late capitalist modernism (to quote Jameson) or, as I like to call it, late modernist capitalism. Trinh T. Minh-ha (a Vietnamese – so she has an intimate understanding of the construction of history, as pertains to colonization / imperialism – filmmaker, writer, literary theorist, composer, and professor) famously wrote that “there is a third world in every first world, and vice-versa.” Bonham – and myself, initially – spoke of Vietnam. But you’re more likely to see a third world in your own city, overseen and monitored by a machine not unlike this sculpture (with the excessive militarization of police departments), in the skies over Detroit or Cleveland or Baltimore…or my own site of Niagara, or my previous space of Saskatoon, with tent cities and other ‘undesirables’, too often given harm over help, unlike other more harmful groups that squat, rife with sedition and fascist symbols….

Many thanks to Terry Graff for support, and conversations, that helped define this essay. Much more about Bonham’s life and artwork can be seen at Graff’s social media feed (there is also a petition to make Western reverse their decision here) and Bonham was a past Artist You Need To Know, in AIH Studios’ ongoing series. That can be enjoyed here.