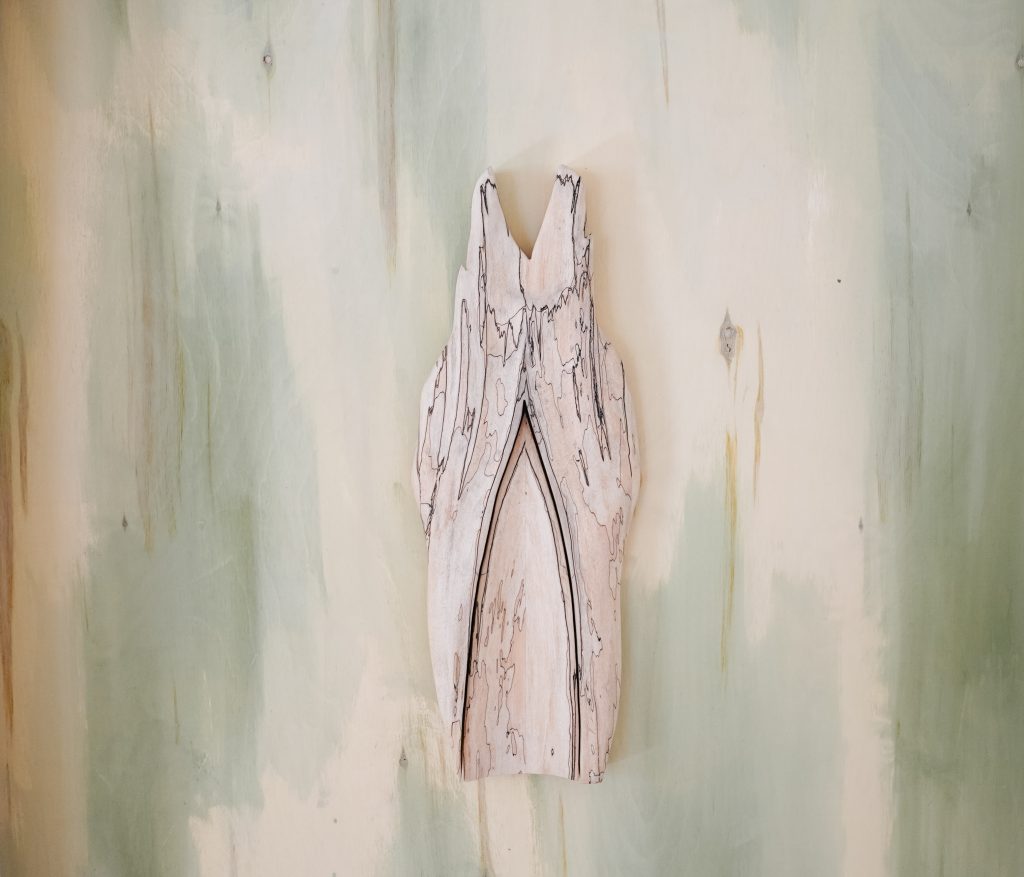 Warm wood elements and ethereal, textured lines swirl around a white washed room, bathed in natural light. Megan Feniak’s show, Listily Lean, is simultaneously methodical and untethered: an open reflection on currents of desire in the context of religious experience.

The show’s title comes from a passage in a 14th century mystical text, The Cloud of Unknowing: “lean listily to this meek stirring of love in thine heart, and follow thereafter.” The artist notes the discontinued use of the word, listing, and motions to define it by what it is not: the more commonly used term listless, having no energy or enthusiasm (Oxford Dictionary). She describes leaning listily as “to chase, or to follow with an eagerness- an insatiable craving” a craving that is distinct from the negative connotations associated with the word lust. And it is so, the work is not a passive series of pieces but acts in unison, as one figurative brush stroke that embodies action, momentum, a burst of motion toward and in pursuit. Of what exactly? Only the artist knows.

Influenced by the works of Christian mystics, Feniak describes the research leading up to her show as circling around Anne Carson’s text, Eros the Bittersweet. This helped frame Feniak’s own work around eros as both pleasure and pain and to also speak to lack. Feniak describes the paradox of desire as “sustained only as long as the desired is out of reach. Absence is the surprising factor in the equation of desire” and quotes Carson in saying, “for (their) delight is in reaching; to reach for something perfect would be perfect delight” (Eros the Bittersweet 69).

According to Feniak, it is this act of reaching for something perfect that is both the joy and the confounding dilemma of mystics. In her work, she listily leans to understand; hungrily, painfully yearns to both capture and test the limits of human desire.

To stretch the title even further, the pieces also appear to have a desired lean, pared down feel to them, while their earnest presence marks the space with an overwhelming sense of profundity and wistfulness. The eagerness and motion indicated by the title is captivated by the fragments of wood carvings and sculpture, dispersed throughout the room and woven together by the strokes of fluidity marked by the lighter, wispy elements of show.  The intensities of desire and delight are stitched by the deeply spiritual threads of mysticism and relish in a dreamlike experience beyond the daily and mundane.

In describing the show, I apply the artist’s own method of distilling “listily”– by describing what it is not. It is not loud nor sanctimonious, but it is not quiet. It is not self-congratulatory and yet it is not meek. It is not frozen in one specific time or place, but feels as though it is part of a continuum, both for the artist but also for a more universal theme of human relation to divine exploration. In the  same way that spiritual practice shatters human perception and notions of boundary, Listily Lean creates a bodily intimacy with the abstract and leaves us craving for more.

Megan Feniak received her BFA from the Alberta University of the Arts in 2018, and MFA from the University of Guelph in 2021. Working in sculpture and woodcarving, her sculptures intimate the power of affects, gestures, and the positioning of the body in ritual and belief.