Take The Long Way Home is a graphic novel by artist Jon Claytor based on a 2019 voyage of discovery he made from Halifax, Nova Scotia to Prince Rupert, British Columbia. The Sackville based multimedia artist is best known as a painter, but he is equally talented as an illustrator and story teller (as is demonstrated in Take The Long Way Home). His home is now, believe it or not, four doors down from my house in Sackville. Formerly a student of mine at Mount Allison University, he graduated in 1988, and went on to obtain an MFA in painting at York University in 2012.

Between Mount Allison and now Jon has certainly led a full life: perhaps, in comparison to most people, too full of a life. He has just turned fifty and is the father of five children: while trying to make a living as an artist, he has done many other things including bartending at his own bar in Sackville. Actually, in considering my many students over the years, Jon has been a very successful artist with numerous painting exhibitions in Toronto and many sales to his credit. Of course, all of that does not mean making a lot of money – a ‘successful’ artist in Canada does not equate to making a living. However this book – his first – tells another more complex and intimate story of his life. In particular, Take The Long Way Home tells the story of his battle with alcoholism.

Jon was offered a residency in 2019 in Prince Rupert to create this graphic novel. The book is not just about his physical journey from the Maritimes to British Columbia nor solely a consideration of his life as an artist, but is also centered on his human failings and eventual triumph over his personal demons. It was a long drive that resulted in a long book of some 456 pages, a length which even surprised Jon, but there was a great deal to recount.

There was a time in my own life when I took long cross country drives, but that was a long time ago. They were, like Jon’s journey, a time for reflection as the kilometres added up. What is there to do except listen to the radio, try to stay awake and avoid running into something or someone? I often ended up talking to myself (which was generally a dull conversation). Jon’s meditations on this trip – his inter-conversations, when his thoughts and memories were his sole company – were anything but dull.

A good graphic novel’s message, to reverse Marshall McLuhan’s dictum, needs to be more than the medium. The story is the thing. Jon offers a narrative that you don’tt want to put down until you get to the last page. I started it one evening and finished at 3 AM the next morning.

But – as I mentioned earlier – I’m not an ‘average reader’:  Claytor’s characters, settings and some events are as familiar to me as Sackville, where myself and my former student live a few houses apart. All of that being said, there is much in this book that’s new to me and gave me a greater understanding of Jon. Take The Long Way Home is not a work of fiction. It’s a visual biography of an important turning point in this artist’s life.

It is the conversations that we have in our minds with ourselves that are the most truthful as regards our successes and failures. The ability to share these conversations, in particular our failures, sets apart an artist like Jon from most people that like to keep their private thoughts to themselves. Jon is often brutal recalling his struggle with alcoholism and how it affected him and those he loves. There is little self pity in his story and he takes full responsibility for his life and actions. But Take The Long Way Home is not a depressing read. There are many moments of humour – and, of course, in the graphic novel format, illustration and drawing are essential elements that shape the reader’s experience. Claytor is an excellent draftsman. 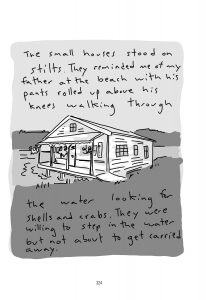 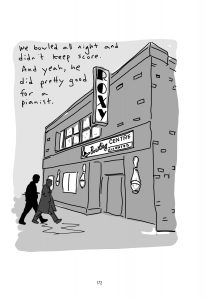 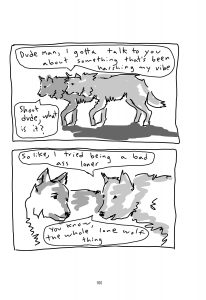 Jon has always had a special talent for drawing animals, and there are many of them in this novel—dogs, wolves, bears, rabbits, horses, and ducks. He gives them a voice in their thoughts and in the conservations that he has with them, rather like Dr. Dolittle showing empathy with the animals. He even illustrated a long thoughtful conversation in Wawa, Ontario, he had with the late Canadian pianist, Glen Gould, that ended in a round of bowling. It turns out that Gould in life liked to stay in Wawa and (according to Jon) still enjoys the town as a ghost. As for Gould’s bowling, Claytor (who once owned a bowling alley and bar in Sackville) was complimentary : “And yeah, he did pretty good for a pianist.”

I asked Jon about the execution of the drawings (all black and white) assuming that he’d done them in sketchbooks; but almost all of them were created on an iPad. That surprised me as I thought that he was more of a traditionalist (I’ve tried unsuccessfully to draw on an iPad, but can’t get past the lack of feedback from the pad’s surface). Claytor’s drawings certainly have the aesthetic of pen and ink (and it’s the results that count and not the medium). He did tell me, however, that he remembered me teaching him about the importance of feedback from a surface, be it a pencil on paper, or a brush on canvas. It is nice to know that former students sometimes remember what you told them, even as they go their own way.

Of course, it is his real conversations with family, close friends, and his inner thoughts that make up the bulk of Take The Long Way Home. He is a man who loves and is loved in return.

It is difficult to honestly come to terms with your own life – much less illustrate it for others to see. Jon has succeeded in doing that. Claytor was told, when he reached Prince Rupert, that “You will know you’re here when the road ends.” His response: “Of course the end of the road isn’t the end of the road.” Take The Long Way Home is the just the beginning.