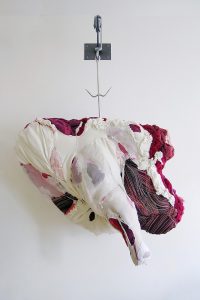 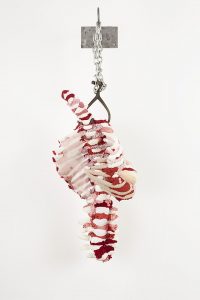 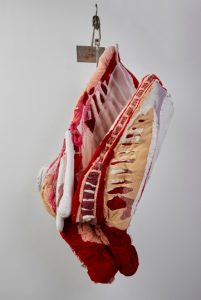 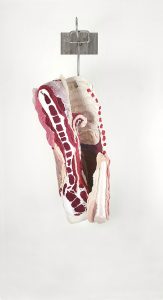 Jana Sterback’s Vanitas: Flesh Dress for an Albino Anorectic (1987) which was a garment made from 23 kilos of salt-cured raw flank steak, sewing thread, salt and metal, alternately worn by a model while fresh and later to be displayed on a dressmaker’s dummy as it rotted and stank and festered, comes to mind. Andres Serrano’s richly, bloodily red severed calf’s head – safely sanitized in as one of his visually delectable C Prints – titled Cabeza De Vaca (1984) for the rapacious Spanish Conquistador of the same title, must also be considered when engaging with Kostianovsky’s contrastingly bloodless tableaux. Many, oh so many paintings by Francis Bacon or Chaïm Soutine (Carcass of Beef, 1925, for example) stand like ancestors behind Kostianovsky’s art. Perhaps we’ve stepped into the same room that the blind, toothy figure from Bacon’s Untitled (1946) haunts, like a denizen of another level of Dante’s Inferno. Maybe the environments that Kostianovsky proffers are the interiors, the worlds ‘made flesh’, that we saw painted in Bacon’s numerous crucifixions.

Or these are Soutine’s rendered in three dimensions, with colours just as raw, and with that same alarming allure. I feel it’s appropriate to cite all these artists who employed the symbolism of meat and flesh – often to hint at, or imply larger issues – as Kostianovsky speaks of this in her own comments about her art: Inspired by Art History, memories of butchered meat I saw while growing up in Argentina, and the mechanized systems of consumption that dominate the production of goods in the United States, my work proposes a type of beauty that integrates our corporeal realities to the contemporary systems of industrialization that devour them. 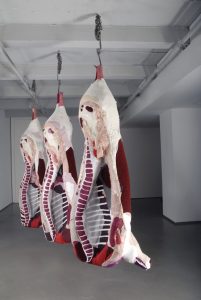 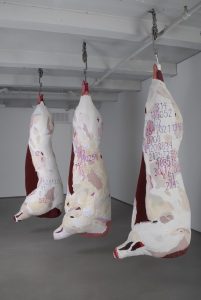 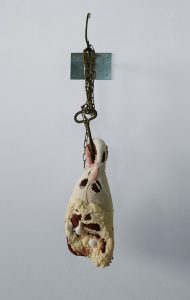 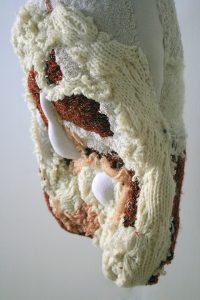 To return to the term Actus Reus, I’ll inject another consideration: the painter Francis Bacon often spoke of how he used the term ‘crucifixion’ as a generic term for something terrible happening that others stop to watch…

But there’s a confutation: many of the ‘sides of beef’ that hang on meat hooks are ‘dressed’ in delicate patterns, sometimes distressingly floral and decorative, more like a fine flocked wallpaper you’d find in a Victorian lady’s drawing room. The yellows or reds that might be initially seen as fat and flesh are, in fact, anything but that. Kostianovsky’s words, again: Garments from my own wardrobe make up the bulk of the material I use in my fabric work. Committed to giving a second chance in the world to rejected articles of clothing and other domestic textile items, I periodically cannibalize my own wardrobe looking to find supplies to create sculptures with. A type of alchemy happens in my studio, where discolored undergarments are transformed into ligaments, stained tablecloths assume the color and texture of exotic bird feathers, and over worn sweaters unravel into the rich textures of animal fat. By contrasting a visceral imagery with soft materials, I seek to reintegrate the physicality of our bodies and the natural processes of birth, growth, and decay back into our existential understanding of life.

A teacher of mine – and a fine artist – once described exhibiting her work as akin to hanging your skin on the wall, as it was so personal – like your own clothing, and that consideration is in play here, as well.

You can enjoy more works from this series here, and Tamara’s main site is here.