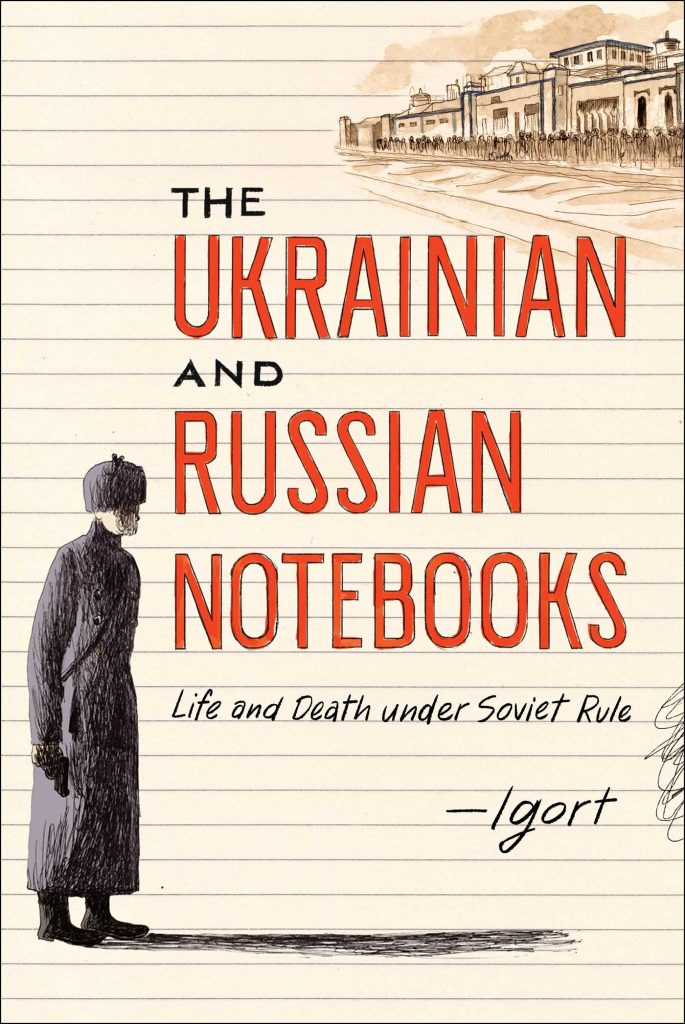 All has been looted, betrayed, sold; black death’s wing flashed ahead.
(Anna Akhmatova)

Of late, I’ve been exploring more graphic novels in my reading (this was partly inspired by Virgil Hammock’s feature on Jon Claytor’s Take The Long Way Home). I cut my artistic teeth on comics, as a teenager, and it’s been good to see them garnering the respect they merit in North American cultural discourse.
Sometimes I’ll pick things up at random. That’s how I encountered Putain de Guerre! (Goddamn This War!), by Jacques Tardi and Jean-Pierre Verney, translated into English by Helge Dascher. That graphic novel came to mind as I was reading – also having picked it up on a whim – The Ukrainian and Russian Notebooks: Life and Death Under Soviet Rule, by Cuadernos de Igort (who creates his work under the name Igort) with Jamie Richards as translator.

Both are horrific. Putain de Guerre! is perhaps less shockingly immediately visceral, as we can pretend it’s more remote, more ‘done’ and ‘in the past.’ But Igort’s Notebooks have a contemporary resonance, with what’s happening in the Ukraine right now. It scalds, in an immediate manner, and you’ll carry the personal stories of the people in it with you, long after you’ve put it down. It horrifies, and the personal narratives splash onto, and into, you, if you even have the barest sense of empathy. In this sense, it’s like Timothy Snyder’s Bloodlands: Europe Between Hitler and Stalin, where myself – and everyone I know who’s read it – found they had to repeatedly check the endnotes, as the sheer numbers of slaughter and death seemed unreal. A friend from Poland told me she could only read it in parts, as it was simply too much.

The Ukrainian and Russian Notebooks: Life and Death Under Soviet Rule are equally harrowing, as brilliant in a minimalist artistic execution as they are grotesquely overwhelming in the tales being related.

“After spending two years in Ukraine and Russia, collecting the stories of the survivors and witnesses to Soviet rule, masterful Italian graphic novelist Igort was compelled to illuminate two shadowy moments in recent history: the Ukraine famine and the assassination of a Russian journalist. Now he brings those stories to new life with in-depth reporting and deep compassion.

In The Russian Notebooks, Igort investigates the murder of award-winning journalist and human rights activist Anna Politkoyskaya. Anna spoke out frequently against the Second Chechen War, criticizing Vladimir Putin. For her work, she was detained, poisoned, and ultimately murdered. Igort follows in her tracks, detailing Anna’s assassination and the stories of abuse, murder, abduction, and torture that Russia was so desperate to censor. In The Ukrainian Notebooks, Igort reaches further back in history and illustrates the events of the 1932 Holodomor. Little known outside of the Ukraine, the Holodomor was a government-sanctioned famine, a peacetime atrocity during Stalin’s rule that killed anywhere from 1.8 to twelve million ethnic Ukrainians. Told through interviews with the people who lived through it, Igort paints a harrowing picture of hunger and cruelty under Soviet rule.”

“With elegant brush strokes and a stark color palette, Igort has transcribed the words and emotions of his subjects, revealing their intelligence, humanity, and honesty—and exposing the secret world of the former USSR.” (This quote, and the previous one, are from here).

If – after all that – you’re still interested to seek out a copy of Igort’s recording of the stories of Serafima Andreyevana, Nikolay Vasilievich, Maria Ivanovna and so many others, I suggest visiting the artist’s site, though my local library has an impressive collection of graphic novels and their ilk, and that’s a fine place to begin, as well.