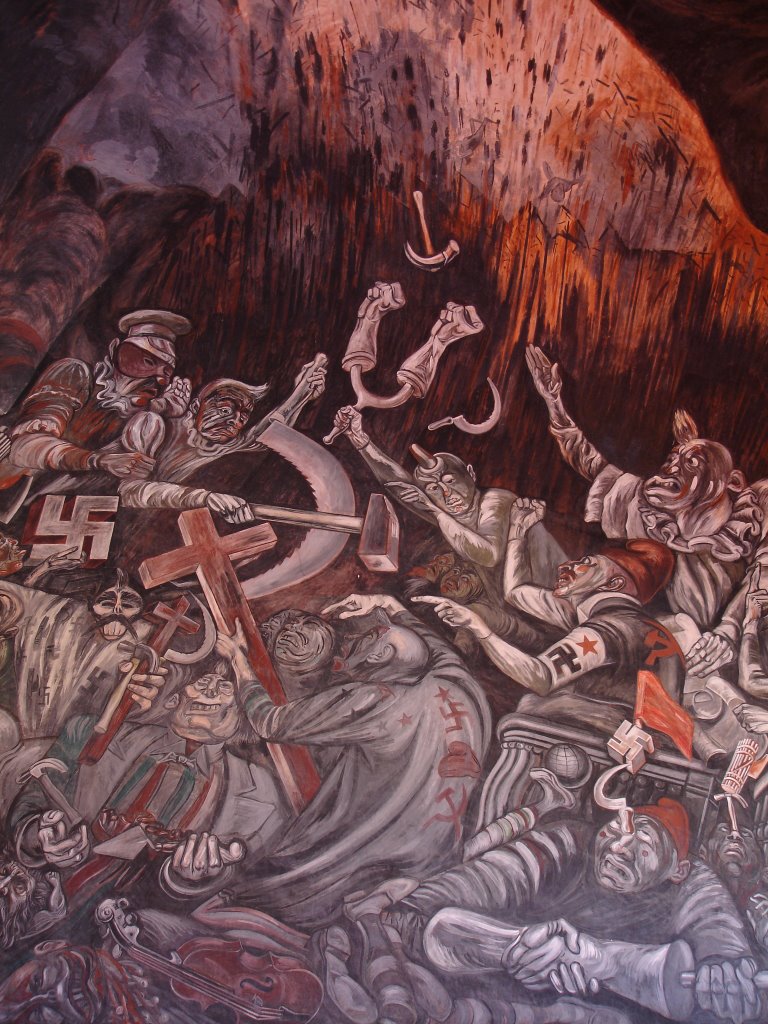 José Clemente Orozco | The Clowns of War Arguing in Hell, 1944

Do I look like the kind of clown that could start a movement? (from the film Joker, 2019)

This fresco, created only five years before the artist’s death, is a good example of how ‘Orozco’s late works were characterized by a deep sense of anguish and pessimism as the artist grew skeptical about the future of humanity in the wake of sweeping technological advancements.’ (from here) The facile art historical reading is that this work was Orozco’s reaction to WWII, but even a quick perusal of his impressive body of work, and the cultural and social milieu he existed within, will indicate that this is a more complex and personal artwork than that.

It is, bluntly, a horrifying piece, and intended to be so: painted in the final days of WW II, one might see this as the answer to that image of the conference at Yalta, with FDR, Churchill and Stalin, still pretending to be allies and not with their knives out to gluttonously divide the spoils of war.

Recently I was lucky enough to write about the work of Orozco’s colleague Rufino Tamayo, who eschewed the political discourse that this artist – and other contemporaries like Diego Rivera or David Alfaro Siqueiros – considered essential to Mexican art. Orozco is at the opposite end of this spectrum from Tamayo: in this regard, Octavio Paz [the internationally renowned essayist and poet] once remarked “Orozco never smiled in his life.” (from here) Perhaps that is because – as with this work – Orozco had little use for genteel diplomacy, and knew that once you saw horrors, it was a conscious act of morality to not look away….I am also researching the Russian – Canadian artist Paraskeva Clark, right now, and her aesthetic was to respond to, and reflect, the world she lived within. That is what Orozco is doing here.

But if I’m honest, the reason this older work holds my attention now and I want to share it here is because it seems that very little has changed, in our political discourse, and that we’re still – willingly or press-ganged – onto Das Narrenschiff [A Ship of Fools], a favourite theme of Hieronymous Bosch and so many others….

A quick perusal of the civic candidates standing for office in my space of Niagara only emphasizes this appropriate cynicism.

Much more about Orozco’s life and legacy can be seen here.