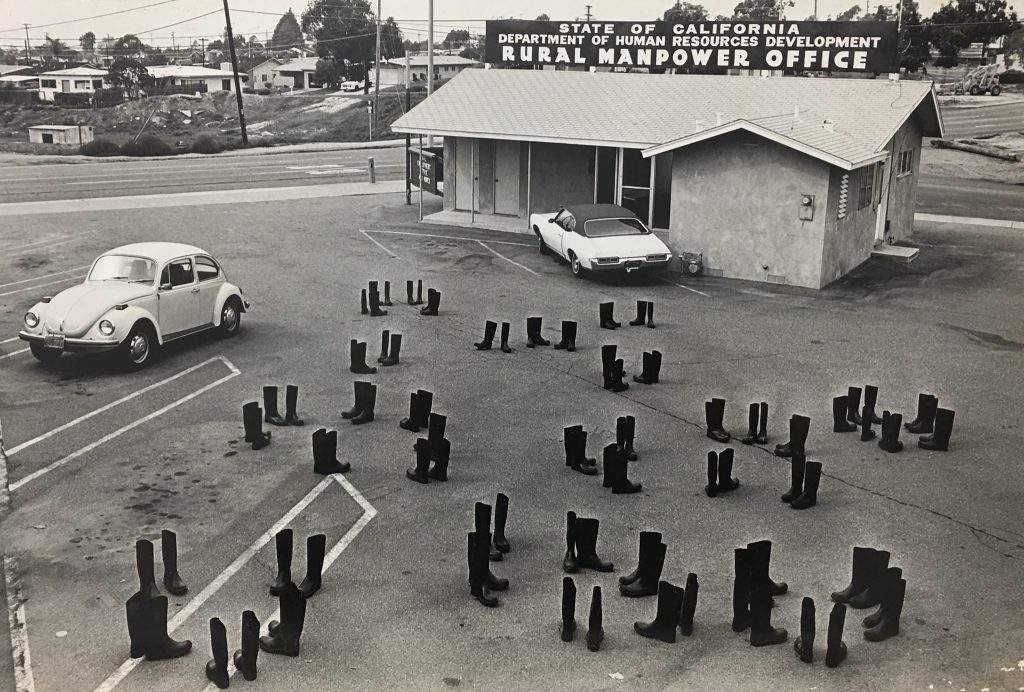 “For month after month after month, her five-score empty rubber boots had to be carted across the country, set up in various evocative spots, and then photographed before someone could come along and chase Antin away…at the time, the empty boots would have had immediate resonance as a reference to the Vietnam War, and to the boot-wearers who would never come home.” (Blake Gopnik)

Eleanor Antin is an artist who has not, in my opinion, received the credit she merits for her performative installations and photographs that have a cinematic quality. At the risk of being flippant, if Gopnik, Camille Paglia and I myself all agree as to her importance, we surely can’t be wrong. Antin has been making work since the 1960s, and her art often intersects with politics in both overt and covert ways.

From Paglia’s Glittering Images: A Journey through Art from Egypt to Star Wars: ‘As a work of Conceptual art, 100 Boots consisted of temporary on-site sculptural installations documented by photographs (taken by Philip Steinmetz), which were sent uninvited to a distant, dispersed audience. The formal, squadron-like patterns assumed by the boots parody the frigid geometries then being made by male Minimalist sculptors. In their outdoor placement, the boots evoke traditional landscape painting as well as the new genre of land art, which was just emerging from Minimalism. Antin strategically varied the look of the cards so that “seductively beautiful” images were not the rule. Most of them have a bleak desolation reminiscent of existential European art films. Indeed, Antin saw the work as “a movie composed of still photos”.’

Over her career, Antin ‘has utilized a staggering range of styles, media, and materials, and her work has combined theater, dance, literature, drawing, painting, sculpture, crafts, photography, video, and architecture. “All artworks are conceptual machines,” she said. And again: “All art exists in the mind.” Antin deeply influenced the emergence of both performance art and Conceptual photography.’

For myself, these images are about the insidious nature of loss, especially as it pertains to those who have died during the pandemic. Empty boots that take on the nature of ghosts that appear in any place at any time, a simple – almost banal, like a rubber boot – fact of absence that hits you like a hammer to the chest and requires you to sit down to consider it….

Eleanor Antin was a previously featured Artist You Need To Know, in AIH Studios’ continuing series. That can be enjoyed here.

More works from this series can be seen here. 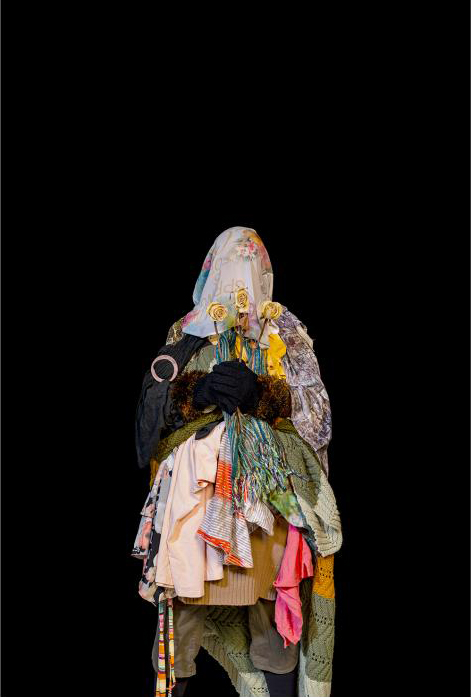 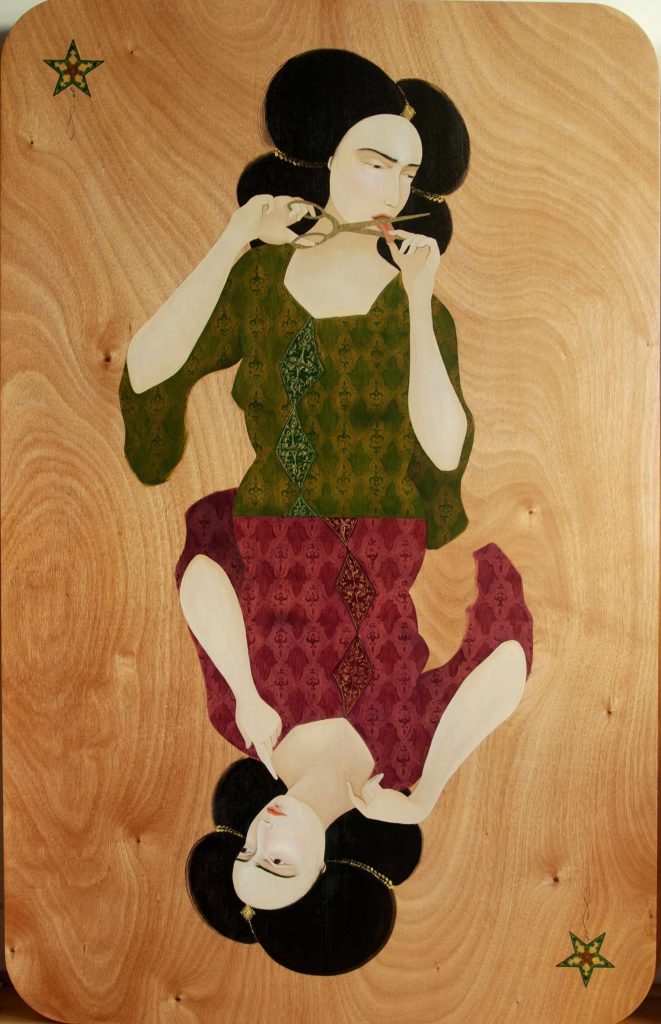 Hayv Kahraman was born in Baghdad, Iraq, in 1981 but now lives and works in Los Angeles. She describes her work as being “a vocabulary of narrative, memory and dynamics of non-fixity found in diasporic cultures are the essence of her visual language and the product of her experience as an Iraqi refugee / come émigré. The body as object and subject have a central role in her painting practice as she compositely embodies the artist herself and a collective.”

This work was made around the same time as her series Marionettes which “explores this subject of female oppression with particular reference to war in the Middle East and specifically in her home land of Iraq. At the same time, she turns her attention to female subjugation found in the everyday, in a series of work focused on women and domestic life. Enslavement is depicted through strings controlling the movement of the women; they drift through the landscapes seemingly oblivious to, or accepting of, their fate.” (from a review in Contemporary Practices, 2010)

This image, as I was engaged in my frequent research about contemporary artists, caught my eye not just for its evocative if disturbing scene (that might be an act of self censorship, or a visual metaphor for a prohibition to speak or be heard), but also with what’s happening in Iran, right now. Feminism – that idea, affronting to so many, that people are all equal – is a contested narrative with overlapping and challenging voices, whether you’re listening to Hurston, Dworkin, Solanas, hooks, Simpson or Deer.

When geo politics enter the conversation – as with spaces where religion is a defining factor, such as the Middle East or the United States, lumbering like a rough beast towards not so much Jerusalem as Atwood’s Gilead – it only becomes more important to allow it to be defined personally, as, “the personal, as everyone’s so fucking fond of saying, is political.” (from the writings of Quellcrist Falconer, the founder of the Quellist movement, in Richard K. Morgan’s Altered Carbon)

As the work is titled Migrant 3, Kahraman might be ‘speaking’ of Iraq or of her new home, in the United States, just as the mirrored figures have differences, as time and experience takes upon any sense of self.

More of Hayv Kahraman’s work can be seen at both her IG and her site.